Deshaun Watson Closing in on 1500 Attempts 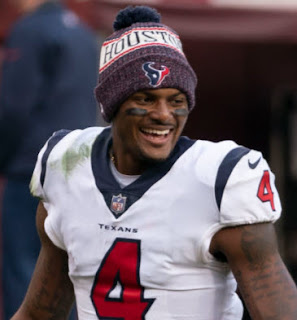 To qualify for the NFL career leaderboards a quarterback must throw 1,500 passes. Why they chose that number we can only speculate. We think it is because Otto Graham threw 1,565 NFL passes (he had more when AAFC passes are counted) when the new NFL passer rating became the measuring stick for quarterbacks in 1973. Also players like Bob Waterfield and Sid Luckman were between 1,500 and 2,000 attempts as well.

Regardless, that is the number.
In the next couple of weeks Deshaun Watson will qualify for those boards and he will rank very high in several of those categories.
here is a chart with touchdowns to interceptions ratio as the sorting data point, but as can be seen, Watson is quite high in a number of other categories and he has a healthy winning percentage despite a rough year in 2020 so far.
We cannot help bu think he will be an MVP in the NFL soon if the Texans can get their ducks in a row.