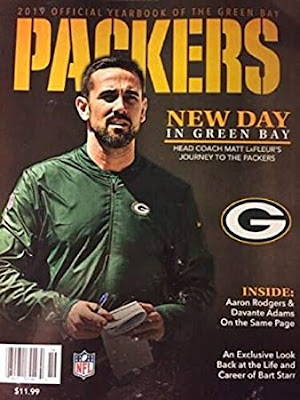 The obvious: Matt LaFleur is a winner.

Less obvious: the Packers’ head coach has been notching victories at a pace far superior to most NFL coaches in their first tour of duty.

Green Bay outlasted Jacksonville 24-20 at Lambeau Field to garner its seventh win of the season. The game is the latest example of LaFleur’s charges coming out on top.

The hiring of a new coach comes with no guarantees. Each season brings a new round of firings as those who fall short are relieved of duty.

LaFleur, who turned 41 earlier this month, became the Packers 15th head coach on Jan. 8, 2019. An NFL assistant for 10 years—including six as quarterbacks coach and another two as offensive coordinator—the native of Mount Pleasant, Michigan has possessed the keys to the most storied franchise in league history now for nearly two years.

Landing the job was an accomplishment. Making a name for himself in a role once held by Curly Lambeau, Vince Lombardi, Mike Holmgren and others would be another matter entirely.

Sunday was LaFleur’s 25th regular-season game at the helm. The milestone provides an opportunity to compare his record against those who came before him.

Getting to Game 25 is a feat in and of itself. Roughly 40 percent of the 500 men on the all-time list never made it that far.

Of the 300 or so who did, few have been as successful so early in their careers as has LaFleur. The second youngest head coach in team annals (Lambeau) has won 20 of his first 25 regular-season games.

As a rookie in 2019, he guided the Packers to a 13-3 record and a division title. In doing so, he joined George Seifert (49ers), Steve Mariucci (49ers), Jim Caldwell (Colts) and Jim Harbaugh (49ers) as the only men to win 13-plus games in their first season as head coach according to the team’s media guide.

This year, LaFleur’s outfit is 7-2 and leads the NFC North Division by two games over the Bears. His club has yet to lose two in a row.

LaFleur is easily off to the best start of any Packers’ head coach. Mike McCarthy had been the standard bearer (16-9) followed by Lombardi (15-10) and Mike Sherman (15-10).

With his team downing Jacksonville by four, LaFleur became the 11th head coach in NFL history to win at least 20 of his first 25 regular-season games. Of the 11, he is only the second (Chuck Knox in 1973) to have gotten there after inheriting a team with a losing record.

In a number of ways, win No. 20 for LaFleur didn’t resemble many of his previous triumphs. Green Bay failed to score on its opening possession for the first time this season. The team was on the wrong end of the turnover differential for the seventh time since 2019.

The 91-yard punt return by the Jaguars’ Keelan Cole was the first special teams touchdown allowed by the Packers under LaFleur. In addition, Green Bay overcame a fourth-quarter deficit for only the third time in the last season and a half.

Yes, the Packers’ win was ugly. Yes, the outcome remained in doubt with less than two minutes remaining.

But Jacksonville’s resolve and refusal to back down only strengthens the notion that winning consistently in the NFL is anything but easy. Even the most downtrodden of clubs can rise up and threaten the best-laid plans of the opposition.

So don’t let this narrow decision over the Jaguars minimize what LaFleur has done. Through 25 games, the offensive mastermind has put the Packers in a position to compete for championships. Perhaps like five of the 10 previous coaches who got to 20 so quickly, he’ll come through with at least one league title before he calls it a career.

NFL head coaches who won 20 or more of their first 25 regular-season games.

*In 1949, the Browns were a member of the All-America Football Conference and not the NFL.