Another week in what so far has been a fascinating season in the NFL. Could always focus on the standings, and will go there briefly—with so many AFC teams at 6-3, there are some upcoming games that sure should shed light on who the final seven are going to be in the AFC. Today though am going to focus on November 15th in league history, and the passing of a legend.

When the Browns lost back to back title games in 1951 & 1952 Paul Brown became even more intensely motivated than ever before, and the classic game against San Francisco in 1953 was hard-fought between the best 49er team ever (to this point in team history), and an undefeated Cleveland team. During the game, Graham left his protective pocket and ran towards the right sideline. As Otto went out of bounds Art "boom boom" Michalik delivered an elbow shot to Graham's jaw. One tough hombre Graham did return to the game and delivered a victory for Brown.

The result of the shot by Michalik was a new type of face guard; thick clear plastic about two to three inches wide that was used by many teams and players the next couple of seasons. This past Sunday the Browns had teammates rush for over 100 yards in the win over the Texans, and though that is impressive----pales in comparison to November 15th, '59 when second-year halfback Bobby Mitchell gained 232 yards rushing against Washington. Though Cleveland struggled to stay in the eastern conference race that year; Mitchell and his compadre in the backfield, Jim Brown established a record that few ever thought could be broken. Mitchell and Brown carried the ball 421 times and combined to lose just three fumbles.

Yes, folks just THREE! Later in this saga, though you will read about a duo that did break the record. Have always enjoyed revisionist history....you know....what if? Green Bay and the Chicago Cardinals did a coin flip for the "bonus" pick for the '57 draft. Imagine for a moment if the Cardinals had won the toss? Simply, that Paul Hornung would have been in Pop Ivy's double-wing offense with Ollie Matson in 1958. Difficult to imagine "the golden boy" in that uniform, and as such let us head to Wisconsin for Hornung's rookie campaign of '57.

Opening day in new City Stadium and Hornung got to carry the ball twice. Second quarter and on a first and ten play he lost a yard, then on second down and eleven he ran right and looked like he was going to throw the halfback option pass, and lost nine yards. The official scorekeeper counted the play as a run, when probably should have been a sack—thank you Mr. Eric Goska! Three games and the rookie has carried the ball eight times for 12 yards. November 3rd, 1957 was the turning point in Paul's career. After three quarter's he has carried the ball eleven times for 51 yards, then from the fullback position he breaks loose for the longest run of his career—72 yards to the New York Giant eight-yard line. The staunch Giant defense stonewalls Hornung in a goal-line stand in the New York victory.

Watching Hornung from the other sideline was the offensive coordinator of the Giants Vince Lombardi. Much has been written about Lombardi's first contact with Paul, yet this story is about aspects of Hornung's style that has not been developed or even mentioned?

The Packers have a chance to open the '59 season with three consecutive victories if they can beat San Francisco. Jim Taylor does not play(listed incorrectly that he played in every game that year), and during the week St. Vince challenged Paul with the concept that he was going to get the ball repeatedly. He set the then Packer record of 28 carries, and pounded out 138 yards! Learned that Hornung was sore as hell, but Green Bay won, and both men proved their point. We all know that Paul set the scoring record in a twelve-game season in '60 with 176 points, but today teams play 16 games, so over the course of 9-25-'60 through 10-8-'61 Hornung scored 240 points. 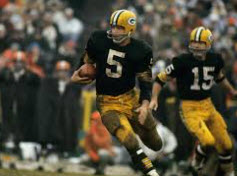 Let that number sink in! There were some that believe Paul was not a true Hall of Fame player—240 points in 16 games IS a hall of fame player. The above title quote from Dave Anderson in an old Dell Sports magazine tells the tale—Lombardi knew this was a man who could help him win. Paul Hornung had an upright running style, and at 6'2" he was a target for hard-hitting defenders. Though he did make a move on a defender now and again, basically he shifted, and bounced off of tacklers. Hornung had tremendous leg drive, and that was paramount in goalline offense for St. Vince.

Green Bay not only ran sweeps, but goalline trap plays, and Paul was exceptional at reading the stout blocking of the Packer guards. Very few times was the Packer running game stopped from '59 through '62, yet on December 17th, '60 with the western conference crown on the line the lowly Rams stonewalled the Green Bay running game (30 carries for just 58 yards).

With so many defenders bunched at the line of scrimmage, Bart Starr played actioned passed the Packers into the lead, and Hornung as he did many times was dead on accurate on his halfback option pass in the game Green Bay had to have. So many folks talk about the Packer sweep, yet it is the companion play—the fullback slant to the weak side that must be run effectively. The left halfback blocks either the outside linebacker, or defensive end (guard pulls or drive blocks), and the ball is given to the fullback Taylor. Paul Hornung was an excellent blocker, runner, passer, and kicker, but what about as a receiver.

He was also productive when called upon, but only once in his career did he catch two touchdown passes in a game—December 12th, 1965 in a must-win situation in Baltimore Hornung catches two passes for 115 yards. Though he did not have much left in the tank, he had it when his team needed it. Paul Hornung struggled against the Detroit Lion defense running the ball; 124 carries for just 366 yards, yet he is one of the few backs ever to average better than 5 yards per carry (minimum of 100 carries) against an opponent. When Paul saw those horseshoes on the side of the Colt helmet he galloped down the field to the tune of 651 yards on 130 carries.

My upcoming book (best stuff have ever done) on the season of 1961—will have in-depth detail on Green Bay. Hornung and Taylor carried the ball 370 times and lost just two fumbles, yes folks they broke the Mitchell & Brown record. Paul also began the campaign with his best season kicking as he made 11 of 14 field-goal attempts in the first six weeks. His military commitment to our country limited his place kicking down the stretch. RIP Paul Hornung you were truly one helluva halfback, and watching you toss the ball into the Wrigley Field bleachers on December 4th, 1960 on the highlight film is still a vivid memory.