Bob Pollard—Hard Worker, Some Wiggle and a Decent Career

By John Turney
Bob Pollard was a versatile player who was sort of a forerunner to some of the 1980s defensive lineman that played multiple roles like Howie Long, Dan Hampton, Leonard Marshall, and others, at least for part of his career, the times he was in a 3-4 defense. We're not saying he did it to the level of those players or as often but his role was essentially the same, he was a pioneer of sorts.
Early on, from 1970 through 1973 he was a defensive tackle for the Saints. He was a late-round pick (really late—the 11th round) in the 1971 NFL Draft out of Weber State (where he was honorable mention All-Big Sky in 1970), though he began his collegiate career at Texas Southern but transferred to Weber State.
He was from Beaumont and stayed local to go to school but the coaches, according to Pollard, wanted to take his scholarship away and give it to out-of-state kids. So, even though he had been a starter he took the scholarship Weber State offered rather than deal with the "manipulation" the Texas Southern coaches were displaying.
Pollard felt it was a positive experience to transfer to Weber because he didn't find the prejudice in Utah that he had in Texas, he made lots of white friends and it changes his perception of whites from bad to good—he felt it was a growth experience for him which was significant for someone whose formative years were still under Jim Crow.
With the Saints in 1971, Pollard earned the starting left defensive tackle job as a rookie with his coach saying, "Pollard combines quick feet and quick hands and a willingness to work combined with an intense desire to become an outstanding pro player." Pollard recorded 79 tackles and was a consensus All-Rookie selection. 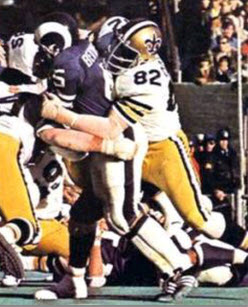 Nineteen seventy-two and the next season were, really, carbon copies of his rookie season gaining experience and progress, though clearly not by leaps and bounds.
Then, in 1974, the Saints changed up their scheme some and played a 3-4 defense a lot more as a base defense. Pollard moved to right end and in passing situations Joe Owens would play right end and Pollard would move inside, like the "sink" ends we mention earlier in the post. 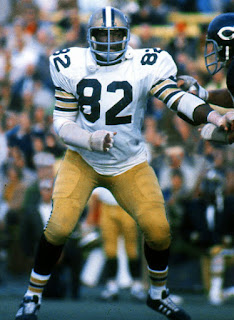 While it was not unheard of in the 1970s, it was not particularly common. Bubba Smith did it some, as did Coy Bacon in the Rams '57 defense' but those were 4-3 base defenses. So this season with this multiple-front scheme Pollard did make a leap in production and thrived in the new scheme recording nine sacks and two forced fumbles.
In addition, the Saints run defense was much improved in 1974 over 1973—cutting the rushing yards per game from 171.6 to 125.6 and the yards per carry from 4.3 to 3.9. 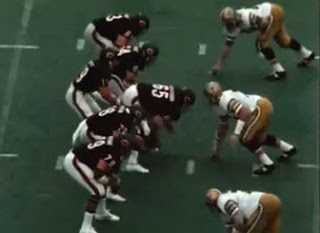 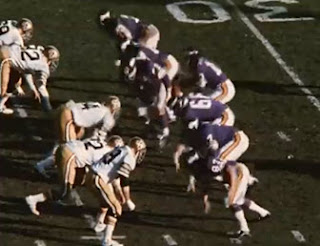 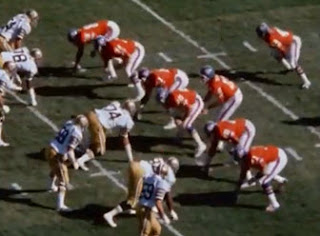 We are not suggesting the Saints played the 3-4 full-time in '74 on run downs or as a base defense, it seemed to vary week-to-week depending on the opponent and game plan and the tendencies of the teams but we'd estimate they used to perhaps 25-40% of the time that season. 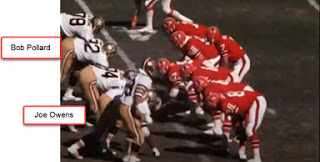 In 1975 they used it far less, maybe 15-25% as a rough estimate but when they did Pollard played over the center as a nose tackle. The Saints yards rushing allowed went up some but the yards per rush dropped a hair to 3.8.
Interestingly, the Saints didn't continue with the 3-4 base the next couple of seasons—1976-77. They were primarily a 4-3 for the next few years and the run defense really fell apart, performing worse than in the early 1970s before the switch to the multiple front looks.
In 1976 Hank Stram moved Pollard to left end and he was excellent—on pace for a double-digit sack season but a knee injury felled him at mid-season. In the eight games he played he recorded eight sacks.
The next year he was off to a fast start in injuries inside cause Pollard to have to move back to tackle. Pollard hard cut weight (about 10 pounds to just under 240 pounds) in '77 to take try and up his game and he had a 3-sack game versus the Lions scored a touchdown on a scoop and score in Chicago.
But late in November things went sour. The Saints had spent a 7th overall pick in the 1977 NFL Draft  on Joe Campbell and perhaps wanted to get him on the field. Up until that point, he'd only been playing some passing downs on the right side. So, Pollard was benched to make room for the top draft pick rookie. This irked Pollard who then demanded a trade. However, fate set in when starters Elex Price and Derland Moore were injured and Pollard moved to defensive tackle, a position he was very familiar with.
In 1978 the trade came when the Cardinals sent Conrad Dobler and Ike Harris to the Saints for Pollard and guard Terry Stieve. At first, the trade was not popular in "the Lou". 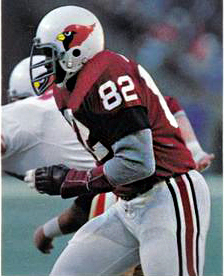 Cardinals Director of Operations Joe Sullivan told the papers, "I trade Conrad Dobler and all of the sudden the town turns upside down. Before that they said I should do anything for a pass rusher then I do it and they say 'what did you do that for'".
Sullivan also went out on a limb, comparing Pollard to L.C. Greenwood, Jack Youngblood, Fred Dryer, and other top ends. Sullivan defended his comments saying "We belong to a scouting combine and I looked up Pollard's scouting report and they put him in that class. And I watched films of him and I put him in that class, too."
The Cardinals were moving to a 3-4 defense in 1978 and Pollard was going to man the left end position and move to tackle on passing downs and Pollard gave the Cards three excellent seasons doing just that averaging 87 tackles and 6½ sacks.
In his final season of 1981 the Cards, primarily due to the development of 1980 first-round pick Curtis Greer who became a starter that season, switched to the 4-3 defense. But by 1981 Pollard was likely not suited to play outside in a 40 front anymore. He was 33-years old and that year it proved to be his last season.
Pollard was named to the Saints Hall of Fame in 1995 and for his career he averaged 97 tackles per 16 games and 5.5 sacks per 16 games. he was a solid pro who never got any post-season honors though had he gotten some All-NFC votes in 1974, that was likely justified.
Mostly a hustle player, and on the "tough-guy" side, he'd scrap with tackles some, he was one of the last players to rely on the head slap a lot until it was finally outlawed in 1977.
What you can say is he was steady, always there (missed only eight games and ten starts in eleven seasons) and he would stick his nose in there and fight a tackle. And could give a little pass rush—he had a little wiggle.
It was a nice career.
Career stats— 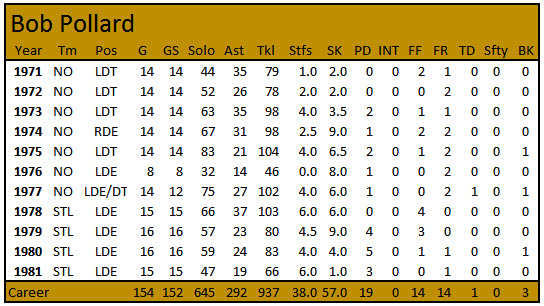