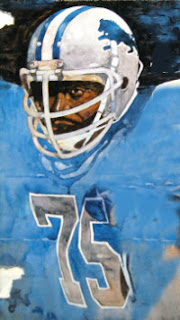 Every NFL player has a story, a journey if you will.
Dave Pureifory totaled 323 tackles (56 for losses) at Eastern Michigan and was the first EMU football player to be named All-American for two seasons. He was a First-team selection of the AFCA-College Division Team in 1970 and 1971, and First-team All-NAIA in 1970. He was also a Second-team All-American on the AP-College Division teams of 1970 and 1971.
Pureifory, 6-1, 250 pounds (he grew to be 265) timed a 4.8 in the forty and benched 450 pounds, was drafted by the Green Bay Packers in the 6th round of the 1972 NFL Draft and spent 1972 and 1973 backing up defensive ends Clarence Williams and Alden Roache and performing well on special teams, blocking/deflecting a couple of punts, getting some snaps on the edge.
In 1974 the Packers were moving to more of an odd-man 4-3 from the even fronts that had been playing since the Lombardi days. Defensive coordinator coach Dave Hanner was planning on using Pureifory like the Chiefs were using Curley Culp or the Giants were using John Mendenhall—over the center on likely run downs, but then "turning him loose" on pass down, lining him up on a guard. 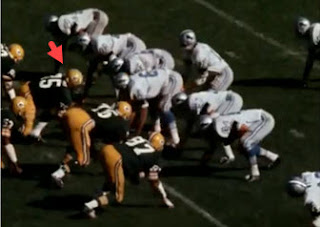 An ankle injury set these plans back and cut into Purefory's playing time and Steve Okoniewski ended up playing more than Dave, who also played a couple of games at defensive end but by all measures it couldn't have been the kind of season he'd hoped for after waiting two seasons to get his shot at being a starter.
Interestingly, the Pack didn't use the aforementioned scheme all the time. Sometimes you can see Mike McCoy as a three-technique, flopping sides, with Pureifory or Okoniewski on the nose, other games it was clear it was a left-right defensive tackle scheme. 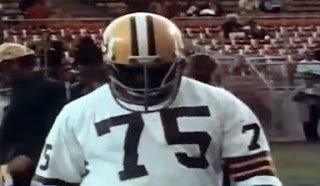 The next season Okoniewski backed up Pureifory who had a breakout year as a starter and racked up 11 sacks, including five against the Rams including one for a safety. He also blocked his third punt in four years, not counted a deflected punt his rookie year. 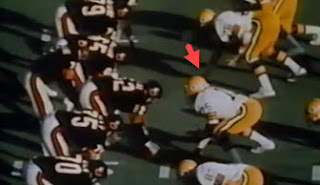 In 1976 Mike McCoy was again the starter at left tackle and Pureifory split time with Dave Roller who returned from the World Football League in late 1975 to join the Packers for the last six games and had shown some good pass rush ability. It was a pretty good threesome at tackle combining for 19½ sacks and batting down 11 passes between them.
In 1977 McCoy was traded to the Raiders and Pureifory and Roller were the tackles but there was a change in the fronts back to what they dabbled in back in '74—the Packers wet from playing left- and right defensive tackles to 'flopping' them—Pureifory played nose and Roller played 3-technique, playing on the shoulder of the guard.
But once again, like in '74, the Packers didn't do it every game, some games they played a more traditional left- and right- alignment for their defensive tackles. So the 'flop' was not an every game thing. 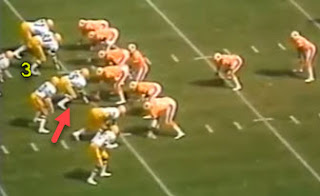 As can be seen from the stills, the fronts were based on the opponent and gameplan but it's fair to say Pureifory played more nose than before, but he was not simply a dedicated nose tackle, either.
Carl Barzilauskas was brought in for 1978 for 4th and 5th round picks and Pureifory became expendable. Roller, apparently was slated moved to the nose and Barzilauskas became the three-tech and the Pack unloaded Pureifory. So, Pureifory, in the next five months became a vagabond.
In early May the Packers shipped him to the Steelers (a 4-3 team) for a fifth-round pick. In August the Steelers sent him to the Patriots (a 3-4) team for a sixth-round pick.
Six days later the Patriots waived him, and the next day the Bengals (a 3-4 team) claimed him. He lasted two months with the Bengals and was cut. Six days after that the Lions (a 4-3 team) signed him and he finished the season with the Silver Rush.
Pureifory was excited to join the Steelers and expected to earn a starting job there, next to Joe Greene. The prior season Steve Furness filled in for both left end L.C. Greenwood and Ernie Holmes and did fine but in 1978 Holmes was gone and the Steelers needed insurance in case younger players like ohn Banaszak or Gary Dunn were not ready or Furness was needed more as an end (as he ended up being).
With those circumstances, Pureifory opened up to the media for, really, the first time in his career. He criticized the Packers defensive scheme "Their style was a little outdated . . . it's over, it's dead. Let's leave it that way." Which was seemingly a shot at coach Dave Hanner.
He also added "I expect to start. I figure I m as good as anyone in the league. I like to think I do everything well—cover the run, rush the passer. You have to be all those things to play in the National Football League".
This sudden outburst, which was quite mild, came as a surprise to the Packers media, who rarely heard him speak to the media, he just didn't do it often in Green Bay during his six years there. Steelers assistant coach Woody Widenhofer, who coached Purifory at Eastern Michigan, said he understood the quiet man. "He's always been a very serious individual. All business. Maybe it's because he had it tough as a kid. He had to work hard his whole life".
Regardless the stay in Steelerland was short. He had a nagging back issue and through camp it seemed the young Steelers linemen were proving themselves to be good players and Joe Greene was healthier in 1978 than he had been the last few seasons so they sent Dave to New England.
It is impossible to know what happened there since the say was so short. With the Bengals, he was a backup to three recent first-round picks and another high pick and when the Bengals needed some offensive line help he was cut to make room.
With the Lions, Pureifory played end which he had not played since 1973 or so but he adapted well. In fact, he became a starter right away, taking over for Ken Sanders who got injured (Sanders, himself an interesting story, had averaged 6½ sacks a season from 1973-77, including 9 in 1977). But in 1977 Sanders was off to a slow start and got hurt against the Chargers and had knee surgery leaving the left end position to Pureifory.
The next four years he averaged 9 sacks per 16 games and drew praise from Jackie Slater as one of the tougher ends he ever had to block due to the leverage he could generate by getting low and getting under a blocker.
His Lions coach Monte Clark was one of his biggest fans (even as he had his issues with Bubba Baker, the right end) and thought Dave should have been a Pro Bowler in 1980 when he was voted the team defensive MVP, and also in 1981 which he thought was Dave's best season. 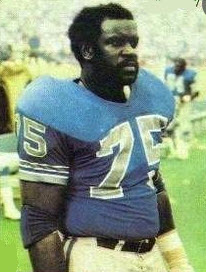 Nineteen eighty-two was his final NFL season and it was a good one, nabbing seven sacks in nine games and getting a chance to play in the post-season for the first time since his rookie season. And in that game, he had a severe knee injury. This time he made a few tackles and shared a sack of Joe Theismann with William Gay.
In 1983 he failed his Lions physical and retired from the NFL. But the football bug was still with him, it seemed because in November he signed a contract with the USFL's Michigan Panthers (and presumably passed their physical). He didn't last long there because early in February of 1984 he was traded to the  Birmingham Stallions where he played two more professional seasons racking up 10 sacks in 1984 (and 41 tackles) and 4 sacks in 1985 while playing on the same line as Reggie White. 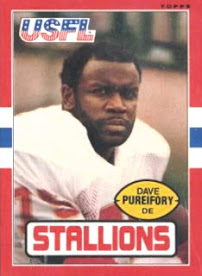 In the years he got significant playing time, 1974-82, he averaged 8 sacks per 16 games and kept that up that pace in his two USFL seasons. He could block a punt for you, play either end or tackle. He could even place kick for your team in a pinch, both kickoffs and field goals and PATs.
He was considered one of the two strongest Packers while he was there (Gale Gillingham was the other) and had very good quickness as well. He wasn't a great player, he had maybe four seasons "above the line" that were Pro Bowl-quality or near there. But overall he's another one of those solid players, unique because he had the body type that didn't really fit what coaches were looking for but he made the most of what he had through hard work and taking his job seriously.
We wonder what might happen now, if a guy 6-1, 265-pounds with a 4.8 forty and a 450 bench came along. With the success of Aaron Donald, might they try him as a dedicated three-technique rather than more of a nose?  We're not suggesting he'd be as good as Donald who is just special and super rare, we're just thinking out loud about the similarities in size and strength and that the bias of the day for shorter players would have been to play on the center (which is likely what drew the Curley Culp/John Mendenhall comparisons in the first place) rather than a three-technique.
As it was his 11½ sacks in 1981 is one of the best-ever for a defensive end that was 6-1. Elvis Dumervil had 12.5 in 2007,  Dwight Freeney had three seasons with more—one with 16.0 another with 13.5, and another with 13.0. The Vikings Al Noga had 11.5 in 1989. Depending on how one counts Pureifory's 1982 season (7 in 9 games, that projects to 12.5) that is another top season.
Another issue is how one would count Keith Willis the Steelers nickel left end in 1983, who had 14.0 sacks. As a non-starter, some could question if he should be listed with the starters we've mentioned.
The last caveat is how you look at guys like Andy Robustelli and Gene Brito. Both played in the era where 6-1 was considered small, but it was not that small, Ed Sprinkle played in that era and he was 6-1, 206. Robustelli was 6-1, 230 at the end of his career but smaller earlier in his carer, in the early to mid-1950s. Brito was 6-1, 225 or so.
Perhaps those players from that far back are not really the same thing as Freeney, Dumervil, Pureifory, and Noga who are true anomalies.
Upon Purefory's untimely death at age 59 in 2009, Monte Clark said in a statement, "Dave was an intense, tough guy. He was extremely quick, and that made him tough to block because he got off the ball so fast".
Intense, quick, tough. Like a Tasmanian Devil.
Every NFL player has a story, a journey, and deserves to have it told. We hope you liked Dave Pureifory's story.
Career stats 1976-82— 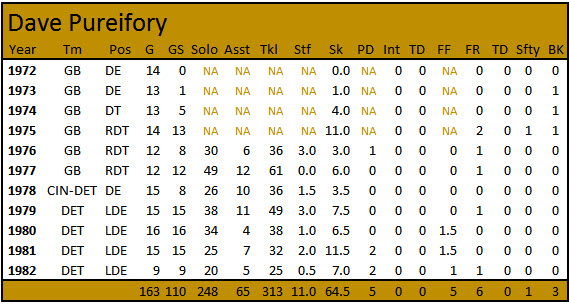