LOOKING BACK
By Joe Zagorski 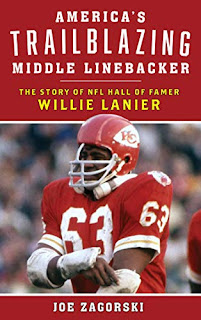 Willie Lanier was drafted by the Kansas City Chiefs of the American Football League (AFL) back in 1967, and he represented a question mark. Nobody in the Chiefs organization was completely sure what type of player they were getting from little-known Morgan State University in Baltimore, Maryland.  Well before the end of his 12-year Hall of Fame career in pro football, however, everyone in the league knew that Kansas City had struck gold with their selection of Lanier. Striking gold with an exclamation mark at the end.

The 6-foot-1, 245-pound Lanier would go on to set a new standard for men who played the middle linebacker position. Lanier was a thinking man’s athlete. He displayed a scientific approach to defensive strategy like no one before him. He studied the game by using angles, speed, and tendencies, all in preparation for every opponent. Then with a sheer abandonment of launching his body into an unfortunate ballcarrier’s chest, he would become famous for his intensely hard hits.

Indeed, it was one of those hard hits which resulted in his only major injury, a concussion that he sustained in his rookie year. Despite being rushed to a hospital, he managed to survive that trauma to his head. He immediately adjusted his tackling technique to wrapping his arms around a running back instead of plowing through his prey with the crown of his head. And thus, the legend of a bear hug by the Honey Bear was born.

To remind Lanier of his hitting adjustment, he had the Chiefs equipment manager redesign his helmet with a 1-inch foam rubber pad that went from the front to over the top, to the back of his helmet.  It was easily the most unique helmet design in pro football at the time.  And it worked! Lanier would never again receive another concussion.

“There is no way that I could have survived if I had not changed my style of play,” admitted Lanier back in 1973.  “I’m not going to take a chance on a fractured neck. There’s no way I’ll ever try to hit anybody head-on again.”

Thanks to the efforts of men like Lanier, Kansas City quickly remained one of the strongest teams in the AFL. In 1969, the Chiefs had the opportunity to make amends for their previous postseason losses in 1966 and 1968. In their first-round game at New York’s Shea Stadium against the Jets, Lanier spurred the Chiefs defense to make an inspirational goal-line stand early in the fourth quarter.  It was the most emotional that Lanier had ever gotten on a football field.

He would yell out to his fellow defenders that “They (the Jets) are not gonna score!”  He would voice that desire several times in between plays, and it inspired everyone wearing a Kansas City uniform.  As usual, he hit the exact right tone for the moment.

“I tried to cause the team to feel the way that I did,” said Lanier. “You never know when an opportunity will present itself again, so it was time to rise up to the challenge.”

The Chiefs did indeed rise to the challenge, as they held on to defeat the Jets, 13-6.  A week later, Kansas City beat their most brutal AFL rival, the Oakland Raiders, in what was the final AFL Championship Game in history, 17-7. 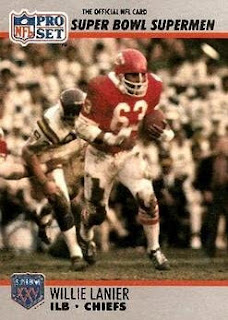 A week after that, Lanier would play in Super Bowl IV, a supposed mismatch against the 13-point favorite representative from the NFL, the Minnesota Vikings. Once again, Lanier and the Chiefs would rise to the challenge.  Kansas City culminated their greatest season (prior to 2019) with a 23-7 upset of the Vikings at old Tulane Stadium in New Orleans.  Lanier managed to intercept a pass in that game that helped to seal the win. The victory in Super Bowl IV was one of the greatest moments in the Honeybear’s life.

“We didn’t know how special it was going to be until years later,” said Lanier, “where we now look back and realize how significant it was, and how difficult it was to get there and win.”

Lanier would never again taste the joy of the ultimate triumph of a Super Bowl win, but he came close in 1971. It was in that year where the Chiefs would win their first and last division title during the decade of the 1970s. And it was in a playoff game on Christmas Day in 1971, where Lanier played in one of the most historic games in NFL history. The youthful Miami Dolphins somehow stayed close to Kansas City on the scoreboard. They tied the game up at 24-24 late in the fourth quarter.  From that moment on, the game was a battle of attrition. Both offenses moved up and down the field during the first 15 minutes of the sudden death overtime period. The first team to score would be declared the winner. But no team scored.

Enter the second sudden-death overtime period. It went on and on and on. At 82 minutes and 40 seconds, a successful Miami field goal ended what is still the longest game in pro football history.  Later, Lanier would remark that “…all you do is keep playing.  What I’m hoping, and always have, is for the other players who play with me to perform at their highest level.”

Unfortunately for the Chiefs, that would not be the case.  Older, more experienced players would retire one by one, and Kansas City quickly went from a winning team to a mediocre team, to a losing team, in a few short years. Despite this, Lanier stayed with the Chiefs until the end of the 1977 season.

He would end his 11-year career with 27 regular-season interceptions, an incredible statistic for a middle linebacker, who played in an era where most offenses still ran the ball a high percentage of the time. 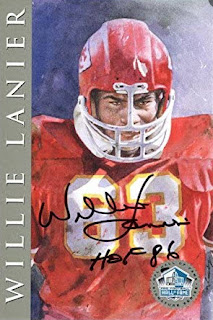 In 1972, Lanier was lauded with the prestigious NFL Man of the Year award, for his spectacular play on the field, and his community involvement off it. In 1986, Willie Lanier got the call from the Hall.  He was enshrined in the Pro Football Hall of Fame, as one of the greatest middle linebackers in pro football history.

Lanier’s former head coach with the Chiefs, Hank Stram, would define what his middle linebacker meant to the team and brought to the team from the moment that the Honey Bear first came to Kansas City.

“Willie had the great strength and was quick to the ball, and had the speed to get outside,” said Stram.  “He had excellent leverage with his body, making him an excellent open-field tackler. Plus he was very bright. He understood not only his position but the entire defensive philosophy. He called the plays on the field. He saw things developing. He didn’t win the position of middle linebacker (on our team)…he came with a deed to the property.”

The debates will always be there. Who was the greatest middle linebacker in NFL history? Plenty of people will name Chicago’s Dick Butkus, or Green Bay’s Ray Nitschke, or Chicago’s Mike Singletary, or Baltimore’s Ray Lewis. Kansas City’s Willie Lanier…the Honey Bear…deserves to be mentioned at least in their number, and perhaps at the very top of that list.