On this day back (July 20th) in 1910 Norris Steverson was born in Mesa, Arizona. His birthplace makes him unique in NFL history because later on in 1934 Steverson became the first-ever player from Arizona State University to play in the NFL.

Back in 2002 I was fortunate to interview Norris Steverson for my book, Old Leather: An Oral History of Early Pro Football in Ohio. On July 5th of that year I visited Norris and his wife Margaret at their home in Mesa. Norris was about to celebrate his 92nd birthday. Despite his age I interviewed him for nearly an hour. He told me he was raised by his grandparents in Mesa and after a productive high school career he attended Arizona State Teachers’ College, now Arizona State University, where he earned an honorable mention as All-American in 1931. He taught physical education at the college after graduating and figured his football career was over.

Then, early in 1934, Steverson joined a team of Arizona All-Stars in Phoenix to face the barnstorming Chicago Bears, the reigning NFL champions. The Bears crushed the pick-up all-star team, but Steverson’s play impressed Bears’ coach George Halas enough that he signed Steverson to a contract after the game. Alas, the signing marked the high point of Steverson’s NFL career. Later, Halas sold his contract to the woeful Cincinnati Reds before the start of the 1934 season.

Bronko Nagurski, Red Grange, and the Bears finished that regular season undefeated while Steverson and the Reds never finished. Plagued by poor play on the field and poor attendance at the gate the Reds folded after a 0-8 start. Steverson played out the year with the semi-pro Tulsa Oilers, then returned to Arizona to resume his career as a teacher and coach. By playing for the Reds, Steverson became the first player from Arizona State University to play in the NFL.

After his retirement from pro football, Steverson began teaching at Arizona State and in 1950 he founded the ASU men’s gymnastics club team and guided it through the first decade of varsity competition until 1968. He has been associated with Arizona State as a player, coach, teacher, alumni, and fan for over 75 years.  In 1975 Steverson was inducted as a charter member of the Arizona State University Sports Hall of Fame.

After my interview I wrote the following oral history chapter on Norris Steverson:

I grew up on the West Coast at a time when football was just getting started. We didn’t have any real pro teams in Arizona, but the colleges played. My mother was a teacher and my father held several jobs. He worked as a farmer, bartender, and was an engineer for awhile. Then, when I was about 10-years-old, they divorced. I was an only child, so they sent me to Mesa, Arizona, to live with my grandparents.

I was pretty good at all the major sports. We didn’t play much golf or tennis, just the major sports. We played baseball, basketball, track, and of course, football. Football was always my favorite sport and that continued well into high school. I ended up lettering in all four sports in high school and I thought I could continue in college. So after graduation, I decided to go to Arizona State Teachers College, which is now Arizona State University.

Arizona State let me play all four sports, which was fine with me. I loved keeping busy and that’s what I did. But it was an off-the-field event that made me very popular around campus. In Hollywood at that time, the movies named Clara Bow as the “It Girl.” So Arizona State held a contest to find the school’s “It Girl” and “It Man.” So as a freshman, I won the “It Man.” I beat out the whole campus for this prestigious title. Everybody got to know me really well after that.

I was considered a triple-threat player while at Arizona State. I could run, pass, and kick. In 1930, I was elected captain. That was a nice honor for me. We struggled as a team my first couple of years, but we put it all together in 1931. Our crowning moment came against our chief rival, Arizona, that year. The school hadn’t beaten Arizona since 1899, and we needed that win to finish in first place in the newly established Border Conference.

I remember the week leading up to the game. The student body was very concerned if we could win, so we wanted to win very badly. We had the ball first, but we couldn’t do anything with it, so we punted. As Arizona’s offense got rolling after our punt, my heart started to sink. But we held them, and on the following punt, I returned it for about 35 yards to set up a touchdown. From then on, I felt good about our chances.

I had a hand in all three touchdowns we scored that day and we beat them 19 to 6. I think it was the school’s biggest win and I think it was another several years until we beat Arizona again [1949]. The school newspaper in Tuscon said there were three reasons the Wildcats lost the game: Steverson, Steverson, and Steverson. At the end of that season, I was named to the first All-Border Conference team and won honorable mention honors for All-American. This made me even more popular on campus. I remember years later when I had to make some phone calls for a class reunion, I couldn’t believe how many people remembered me from my football accomplishments.

Before my junior year, our Athletic Director, Aaron McCreary, wanted to talk to me about my future. He told me if I make physical education my major, then the school would hire me after I graduated. So I gave it a try. It took a lot of hard work but I got it done. After graduation, I taught physical education at Arizona State.

Since we didn’t have any good pro teams in Arizona, I never really thought about playing pro football. But in early 1934, George Halas and his Chicago Bears were barnstorming the country and they were going to stop in Phoenix and play a game against a team of Arizona all-stars. I was contacted by Cecil Mulleneaux who played at ASC in Flagstaff [Arizona State College at Flagstaff. Now Northern Arizona University] and who was playing with the Cincinnati Reds of the NFL. He was in charge of putting the Arizona team together and he asked me to play. Well, I hadn’t played any competitive football in over two years since I graduated, so I thought I give it a try.

Despite getting beat pretty bad [55-0], I was voted the top all-star from the Arizona team, and the vote was done by the Bears players. George Halas was so impressed by me that he signed me to a contract with the Bears after the game. I was going to get $90-a-game for the 1934 season, which today doesn’t sound like a lot of money. It was a tremendous thrill to sign with the Bears. I was very much looking forward to playing with Red Grange and Bronko Nagurski, they were the best. Just being part of the Bears was more than I could have imagined. I couldn’t wait. 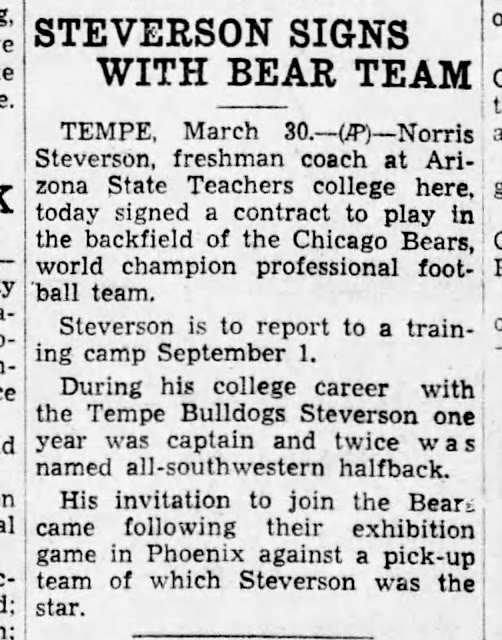 But it never happened. Right before training camp with the Bears, my contract was sold to the Cincinnati Reds. Cecil Mulleneaux needed players, so he had Halas trade me to the Reds. I was very disappointed about being traded. Sometime in the mid-seventies, Halas visited Arizona State and told me he always regretted trading me. That made me feel a little better about the whole thing.

I did play for the Cincinnati Reds in 1934, but that didn’t last too long. The Reds weren’t a very good team. We were absolutely terrible. We didn’t win a game, and halfway through the season, they had money trouble and disbanded. The league moved the team to St. Louis to finish out the rest of the season. I decided not to play for the St. Louis team. After the Reds disbanded, I was on my way home to Arizona when I was contacted by a friend to see if I wanted to play a few games with the semi-pro Tulsa [OK] Oilers. It was on my way home, so I agreed. They paid me a little bit, but nothing special.

I was very proud that I played professional football in the NFL, but I think it wasn’t the lifestyle for me. There was too much down-time. I wanted to keep busy. I was always good at observing and analyzing sport activities. I guess that’s what made me want to teach and coach. I spent over 40 years teaching and coaching at USC, Arizona, and Arizona State. I coached swimming, tennis, gymnastics, and football at Arizona State. Later, before I retired, I even taught a class on trail-riding because it was one thing I always wanted to do.

I’ve pretty much lived near Mesa all my life. I’ve always loved living out here in Arizona. I met my second wife, Margaret, here. She too was a graduate of Arizona State, and in 1945 we got married. In December of 2003, we celebrated our 58th wedding anniversary. My memory hasn’t been that good lately, but Margaret’s is very sharp, so I’m glad she is here to help me.

I still enjoy the game of football. The style of the game hasn’t changed, you’ve still got to get the ball into the endzone. I try to watch a few games a week when they are on. I used to go to all the Arizona State games here.  I had a streak going for about 25 years never missing a home game, until about the last couple of years when my health kept me away. They were nicknamed the Bulldogs when I played, so I try to keep up with them now.

Norris Steverson played just five games with the 1934 Cincinnati Reds until they disbanded because of financial problems. On July 20, 2003, Norris celebrated his 93nd birthday with his wife of 58 years Margaret Steverson. On March 23, 2004, Steverson passed away in Mesa, Arizona at the age of 93.

Despite playing just a handful of games in the NFL, I remember my time with Norris and his wife with fond memories. Happy Birthday, Norris!