Mark Gastineau—Flawed Yes, But Great At What He Did Best Back in the day, Mark Gastineau was getting sacks in bunches and also getting criticism in bunches as well. He was criticized for his sack dance, his long hair, his lack of playing the run, his not always being a great teammate, his record-setting contract for a defensive lineman, and his alleged use of PEDs (he admitted to using them in his career in 2000 and it's not like he's the only one who did that in his era), his Studio 54 nightlife and fight, his television commercials, his shaved body hair and announcing that fact publicly, his crossing the 1987 picket line, his retiring mid-season in 1988, and many more things.
So, is that fair? Maybe. Maybe not.
In the early 1980s, he did what was needed to use his particular skill set to help his team win—he got after the quarterback. He played the game like the pass rushers of the 1960s, he got up the field and if the play was not a pass he reacted to the run.
He also had a couple of interior players—Abdul Salaam and Marty Lyons who essentially played the Merlin Olsen and Rosey Grier roles for the New York Sack Exchange that Olsen and Grier did for the Fearsome Foursome—to look of screens, draws, and traps— the plays than can hurt and aggressive pass rush. So as a unit the system worked with Joe Klecko, the right end, and Mark, the left rushing the edges.
Gastineau, coming out of school in 1979, was a 6-4, 255-pound end who ran a 4.56 or so. By 1980 he was 6-5, 285-290, and still ran a 4.56 forty. In the 1980 off-season, he gained 30-35 pounds and kept his speed. In fact, when he showed up at 290 pounds in the Spring of 1980 he was concerned he'd be moved to tackle. But when he showed he could run a forty in under 4.6 his outside position was secure.
As a rookie Gastineau played only on passing downs, at left end, and showed very good speed. According to Jets coaches, he was second to only Joe Klecko in pressures while playing the "gravy downs" in a platoon with starter Lawrence Pillers.
In 1980 he earned the starting spot at left end and began to show his skills, with all that extra weight and strength. On tapes, you can his unusual size and tremendous speed. He also increased his strength which his bench press going from 315 to 400 in the 1980 offseason.
One game in particular impressed Jets coaches and likely the league's media. It was a three-sack performance versus the Oilers on National TV in which Gastineau also drew four holding calls on right tackle Mo Towns and which the Jets coaches credited no. 99 with 19 hurries.
It was also noted by one of the announcers, Marv Albert that Jets coaches had been displeased with the performance of the other Jet defensive end, Joe Klecko thus far that season (though Kelcko had a fine game that day). Regardless, Gastineau was on the map after that game and led the team with 11½ sacks and 122 hurries in 1980. 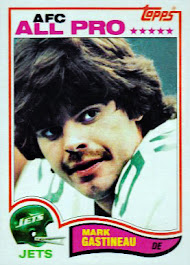 The next season he was a Second-team All-Pro and totaled 20 of the Sack Exchange's 66 sacks and also recorded 8.5 run stuffs, which is actually a good number for a defensive end. While that does not dispel the "bad against the run" narrative it does show he was making tackles on running backs behind the line of scrimmage.
In 1982 he was even better, though the numbers were down—six sacks in nine games and 10 sacks in 12 games (counting playoffs). He was Consensus All-Pro and the NEA Defensive Player of the Year.
When Paul Zimmerman named Gastineau to his 1983 Sports Illustrated team The Jets' Mark Gastineau, the AFC's leading sacker, with 19, was a target for TV commentators this year. They were always telling you how he was overplaying the pass, at the expense of the run, but then their isolated camera would catch him stopping the ball carrier for a yard loss. Maybe Gastineau's techniques aren't perfect yet, but nobody hustled as much as he did—for a full afternoon. No, I don't go for the sack dance either, but give the guy credit. He played great this year."
Zim was spot on. Gastineau had 11.5 run stuffs the most for any defensive lineman in the NFL that year and behind only Mike Singletary and Lawrence Taylor who each had 12.5 stuffs. Not bad for a guy who wouldn't play the run.
While it is true the run stuffs were not part of the lexicon for those TV commentators Dr. Z wrote about. They still are not, though you do see TFLs (tackles for loss) which is a mishmash of sacks and tackles for loss minus plays where a fumble is forces and lead tackles only. But still, as Zimmerman did, they saw the games. And now that we've put a number to it we can put things into perspective and is what is called a "stuff".
The AP NFL Defensive Player of the Year, Doug Betters had 16 sacks and 8.0 stuffs. In 1998 when Reggie White won his final AP DPOY award he had 16 sacks and just 1.5 run stuffs. That begs the question as to whether he would have won that award if voters were paying attention to making tackles behind the line of scrimmage on run plays.
All we know is Gastineau sure got penalized for this weakness before the numbers reflected it because leading the NFL in sacks and being second in stuffs is a rare, rare thing and Gastineau did it in 1983.
Also in 1983 Gastineau fought with Rams offensive tackle Jackie Slater after the latter was beaten for a sack. During the scuffle one Ram lineman said to a Jet player, "He's a hotdog" and the Jet responded, "Yeah, he's an asshole". 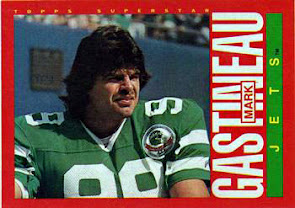 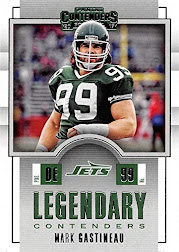 Then came 1988, he started out like he was on fire like he was going back to the Pro Bowl (though Giants offensive line coach Fred Hoaglin said Gastineau had lost his speed), he was one of the NFL's leading sackers and actually leading the AFC, and then he simply announces his girlfriend actress Brigette Nielson, has cancer and he simply retires from football.
Never mind that friends of Nielson said she was not ill. Or that he left $436,000 on the table or that some of his teammates were tired of his act or that one team executive said the "Mark thing is over". His coach Joe Walton was more generous saying, "Say what you want about him but he's been a great player at his position. I'd have to believe that mark singlehandedly made the sack a glamorous play and made the NFL start keeping the sack as a meaningful statistic. He brought attention to it like no one before".
Sounds a lot like the "he changed the game" claim that is given to so many players when their name comes up in Hall of Fame discussions.
At that same time, PEDs were outlawed in the NFL and some suspected that was the reason for him calling it quits—that he was likely going to be banned and years that that proved to be the case.
Regardless, adding in playoff games, in ten seasons Gastineau played 144 games and totaled 116 sacks —which translates to playing 14.4 games a season and recording 11½ sacks. Oh, and throw in averaging 70 hurries a season as well. That's big-time production.

Go through the top sackers in league history and see how many average that many sacks a season. The list is short.
Still, Gastineau gets little respect these days, even in an era where less-than-great run-stoppers with great pass rush skills get tons of praise. Gastineau is a four-time First-team All-Pro, and a one-time Second-team All-Pro has two 20-sacks seasons to his credit and another 19-sack season for good measure.
It was a pretty great six-year run, you have to give him that. 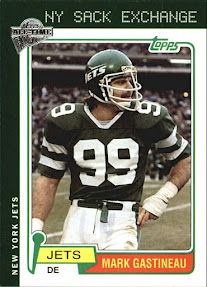 In 1990 Gastineau signed with the BC Lions of the Canadian Football league and played four games and was credited with six tackles in a "comeback" of sorts.
A year later he began professional boxing—if it could be called that. He admitted to taking a dive in one fight and that others took dives to improve Gastineau's record.
He's had plenty of other troubles (some self-inflicted, others not) that he will likely cover in his upcoming autobiography including being a survivor of child sexual abuse for which we have the deepest sympathy as well as for his brain trauma issues (apparently he's been diagnosed with Alzheimer's, Parkinson's, dementia).
In terms of the Hall of Fame and his candidacy, he's gotten no traction. And that will likely remain. He just has too many "knocks" on him that we've covered. But his legacy is that he was the best pass-rushing defensive end of his era—the early 1980s—until Reggie White and Bruce Smith entered the NFL and injuries and personal issues caught up with him.
In the 1980s only Lawrence Taylor had more sacks, among defensive ends only Howie Long (6) went to more Pro Bowls than Gastineau's five. He was All-Pro four times the same as Reggie White yet he got nothing but shade when the Hall of Fame voters picked the 1980s All-Decade team, Mark didn't even get Second-team. We think he should at least have gotten that honor.
We refer to the title of this post and stick by it as the takeaway—"Mark Gastineau—Flawed Yes, But Great At What He Did Best".
Posted by John Turney at 9:09 AM