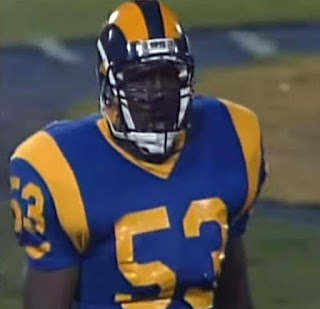 There had been nosebackers before Fred Strickland began to play the position in 1988-89 with the Los Angeles Rams.

What is a nosebacker? Paul Zimmerman used it on a Sports Illustrated article and that name stuck with Strickland. It was due to the fact he played a specialized position in Rams defensive coordinator's Eagle defense, where he'd play over the nose in a 5-linebacker defense and then if the situation dictated it, he'd stem to a weakside linebacker position, making that the "Hawk" defense.

However, back in the day, film shows guys like Bill Willis and Mike McCormack would essentially do the same thing, and even the NFL's early middle linebackers would often put their hand in the dirt over the center to create a five-man line.

So Shurmur didn't really invent that position, but he did bring it back to life.

It started in 1988 when the Rams were woefully short of defensive linemen so as a changeup he dusted off his playbook and implemented his Eagle defense which we hadn't seen for several years though it was seen on occasion, it used base personnel.

However, in 1988, Shurmur used to give linebackers and two defensive linemen to populate the front seven (usually being an eight-man front, the safety would come up to fill the front). And inside linebacker Mark Jerue would act as the nosebacker. After he went down to an injury Strickland stepped in.

In 1989 Strickland opened the season as the starter at weak inside linebacker in the 3-4 and the stemming backing in the Eagle/Hawk. 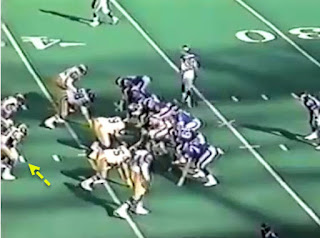 Strickland had the ability to move well, having played middle linebacker in college, but had unusual strength and a 6-2, 250 (255 pounds by 1989) build that allowed him leverage against centers plus a quickness advantage over them.
Jerue had been a nose guard in college and was converted to linebacker in the NFL so he had experienced on the defensive line, and Strickland really had not.
The Eagle was a 5-linebacker defense, but it was not the only one Shurmur employed. Late in 1989, he used five linebackers and six defensive backs.
Strickland had been a tackle in 1988 in nickel/dime but Gary Jeter was still on the team, so it was four linebackers and one defensive lineman—In 1989, after Bill Hawkins was injured often linebacker George Bethune would join Strickland making the defensive a second "5-LBer" defense—
In that package, Kevin Greene and Brett Faryniarz were the ends and Strickland and George Bethune were the tackles with Mike Wilcher the linebacker who could rush or cover. 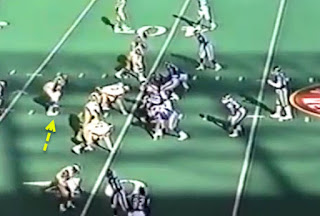 Additionally, Strickland has duties in other sub-packages as a linebacker with Wilcher being a rusher and Strickland in coverage or he could dog as well.
Or, as in the example below, Strickland would play some right end in sub-packages. In this screenshot Kevin Greene and Strickland are the ends, Mike Wilcher is the dime linebacker and George Bethune is the nose tackle. The three-technique (left defensive tackle) is Bill Hawkins.
In 1990 things were much the same for Strickland fulfilling the same roles and duties but the Rams took a turn for the worse and ohn Robinson, under pressure, fired Shurmur and hired Jeff Fisher.
Fisher brought some of the same principles of the Eagle (he was a Buddy Ryan disciple) since the Eagle and the 46 were essentially the same scheme but there were changes in the base defense. The Rams switched from a 3-4 to a 4-3 and Strickland was moved to strong-side linebacker playing over the tight end. 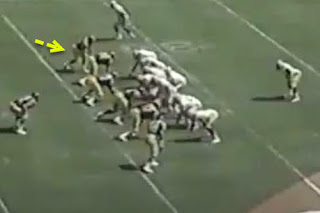 Strickland was also part of the nickel defense, though not as a rusher unless he blitzed. He was one of the two backers (with Larry Kelm) that stayed in the game in likely passing situations.
Kevin Greene was moved to defensive end and due to injuries had to move back to linebacker and other players had to be moved around as well. Near the end of the year, Fisher seemingly tried everything including playing Strickland at defensive end in pass situations.— 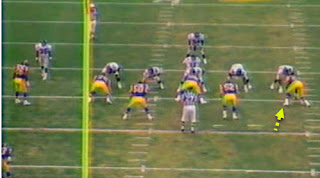 The 1991 season was more of a disaster than 1990 and Robinson and his staff were all fired and Chuck Knox was hired to clean it all up. His defensive coordinator was George Dyer who kept the Rams in a 4-3 but could not find a role for Strickland.
Kevin Greene was moved to left linebacker and he also played defensive end in nickel, Roman Phifer was the right linebacker, he was a star in the making, Kelm was the middle linebacker, as he as in 1991. So, Strickland was restricted to special teams, for all intents and purposes. He simply didn't play and was not invited back for the 1993 season.
Strickland signed with the Vikings and they made him a WILL 'backer and stayed on the field in nickel—a three-down 'backer if you will. 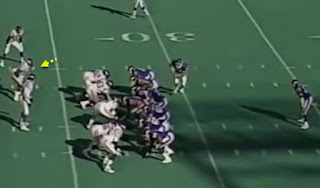 Strickland was no sure thing to start for the Vikings or even make the squad. He impressed in camp and competed for the position. Said Viking Defensive Coordinator Tony Dungy, "We're not a real big defense and we were looking for more size. Fred had an excellent first two years and we think he still has the ability. We hope it shows in this system".
The move to the weakside excited Strickland stating, "On the weak side I will have the opportunity to make more hits". Strickland was not great at coverage (he was best at going forward), but he worked on it and made the team but did not get the starting position until week 2 when second-year player Ed McDaniel went down with an injury.
It was a good season for Strickland but with McDaniel coming back, he was expendable, and a free agent. He was offered a job with the Packers and he took it, reuniting with Frtiz Shurmur, his first NFL coach.
Once again a team was looking for more size in the linebacking corps and Strickland laughed, "Well, I am one of the biggest linebackers around".
He became the MIKE and also again stayed on the field in nickel.
In 1996 the Cowboys were looking for some size at Middle linebacker. For years they had quicker, mobile guys, not 255-260 pound types, like Strickland. John Madden said on one of the early-season telecasts that the Dallas coaches told him, "Strickland may not be the fastest guy, but when he hits a guy, that guy stats hit".
He gave Dallas that for three years but was not part of their sub packages. Now in his early thirties he lost a step and was more of a classic run stuffer than the all-around combination player he had been for most of his career.
The Dallas media was tough on Strickland at first, seeming to highlight his mistakes that they thought were glaring—a key missed tackle, a dropped interception that could have really helped, getting run over by a 49er running back, but by midseason, the reports were generally positive about his play versus the run game 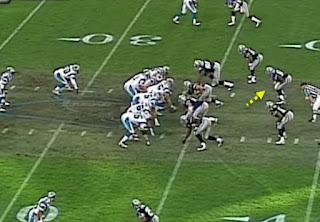 Strickland was a starter for three years in Dallas and signed with Washington in 1999 and was a backup there and it was his last NFL season.

As some may or may not remember the Rams got Strickland as part of the Eric Dickerson trade. They also got Aaron Cox, Gaston Green, Cleveland Gary, Frank Stams, and Darryl Henley, plus Greg Bell and Owen Gill.

Bell and Strickland gave the Rams the most out of that group and when he left they got nothing since he was a free agent.

He was a special player who got a rap for getting hurt too often when he was with the Rams but he sure had some abilities not a lot of players had—to play multiple positions and to do it a lot and to do it well. It was not just some gimmick thing, he played his spots with effectiveness.

It's a pretty good legacy, being a nose backer. Try and name another that didn't play in the 1950s. 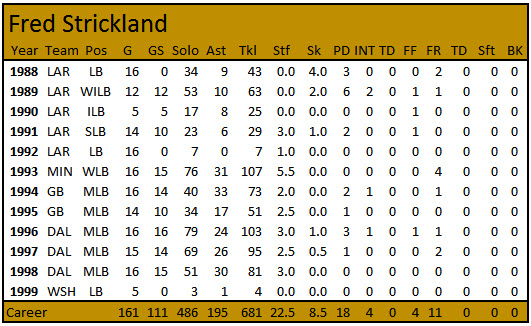