Most fans, even hard-core fans may not remember or even have heard of Joe Harris. He had a short career and even so, was a vagabond of sorts playing for five teams in six seasons (nine teams in nine years if you count the CFL and USFL and his preseason/training camp stints with the Bears in 1975 and the Dolphins in 1982)

As a collegiate player for Tech, he totaled 415 tackles and still holds the single-season tackle record with 188 in 1974. (We've posted before about college tackles being "puffed" at almost all schools) but be that as it may, Harris was a great Yellow Jacket.

With Washington (now weighing 225 pounds, up from the 214 when he was coming out of college), as a first-year player ( In 1975 he was an eighth-round pick by the Chicago Bears and played with the Hamiton Tiger-Cats in Canada that year and in 1976, when he led the team in tackles) he played just on special teams, part of the last George Allen team in the Nation's Capital, one always known for special teams.

Harris was brought in to add depth behind Mike Curtis, who himself  was filling in for Hall of Famer Chris Hamburger who missed 11 games that year due to various ailments. He received a game ball after the Cardinals game in December, according to Allen for his "always good job with the specialty teams".

In 1978 the 49ers sent Washington an 8th round pick for Harris and he proceeded to have one of those seasons that, statistics-wise, was eye-popping—recording 121 tackles, 3 sacks, forced a pair of fumbles, and recovered three. But what was most impressive were his run/pass stuffs. He had 15.5 such plays.
First, what are "run/pass stuffs"? It is a tackle for a loss but not just for running plays but for pass plays as well but it does not include sacks. Pro Football Journal's Nick Webster began cataloging those and has gone back quite a ways, in the 1960s for some teams who had good gamebooks, and listed them

Stats, LLC., began tracking stuffs in 1994 in their football annuals, but they did not include pass plays—running plays only. The NFL, beginning in 1999, has a "tackles for loss" statistic but it includes sacks but does not include sacks or tackles for a loss where the lead tackler forced a fumble. So, if a pass rusher had 12 sacks and on three of them he went the extra mile and forced a fumble, he'd only have 9 tackles for loss on those twelve plays.

So, we think Webster's run/pass stuffs reflects more of a sense of what happened than those other two examples of tackles for loss.
Sure, tackles for a loss face the same issues for sacks in that they are a team play, often, though it is the call of the defense or a great effort by a player or just as often the edge is sealed and a runner cuts back into the pursuit. Additionally, on some plays a stuff doesn't make much difference in a game but still just like some sacks, it's a big play much of the time and worthy of tracking in our view.
That said, Harris' 15.5 run/pass stuffs is excellent, a really tremendous season total for a linebacker. For comparison, in 2014, Lavonte David led the NFL with 16.5, in 1996 Ray Lewis had the most with 16.0, the year before that Ed McDaniel led with 18.5, and in 1993 Junior Seau had 16.5 to top the NFL. So, those are four examples of some recent stuff totals. So the league-leading 15.5 by Harris is quite something, for an unknown, especially.
For whatever reason, new coach Bill Walsh had other ideas for his left linebacker in 1979 so Harris was cut in August and the Vikings picked quickly him up and he didn't last long there before he was cut to make room for another player.
After a slew of injuries forcing backups to become starters the Rams needed some special teams help to fill in some vacant spots and after the Vikings released him they picked up Harris, possibly on the recommendation of Bud Carson who recruited Harris to attend Georga Tech but never actually coached him in college.
Harris quickly paid dividends in 1979, recovering a blocked punt kick and taking it to the house in the late-season win over the Vikings. He performed well on special teams and those units helped the Rams overcome a mid-season slump to surge to Super Bowl XIV where they battled but lost to the Pittsburgh Steelers.
The interesting thing is Rams defensive coordinator Bud Carson must have seen something in camp because Harris soon had a role in the Rams nickel/dime defenses.
Harris showed he could blitz and often he made something happen when he got to the quarterback, forcing five fumbles in 1980-81 along with his 9 sacks those two seasons. He could also hold his own with others blitzed and he covered a back or dropped to a zone. 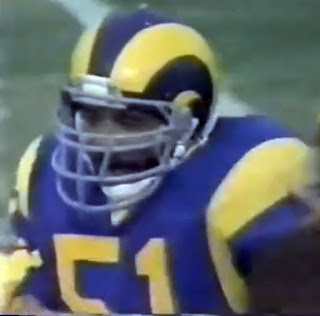 Often he was the only linebacker on the field, with sometimes a safety next to him, making it a nickel defense with dime personnel. In any event, whatever you would call the sub defense, for those two years, he was one of the top nickel linebackers around. 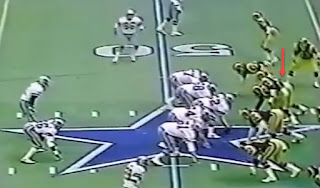 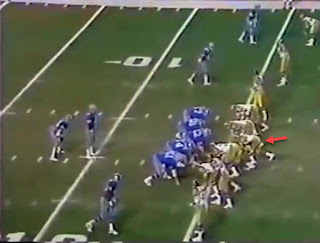 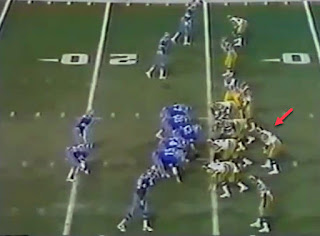 Again, inexplicably the Rams did not invite Harris back for the 1982 season. After two years of success, it seemed odd but whatever the reason he was no longer a Ram.
In late July 1982, Joe Harris was signed by the Miami Dolphins and that marriage lasted about a week—which seems like a very short amount of time to evaluate, but again, he was let go. He was signed by the Colts in early August.
Bud Carson, after being dismissed by the Rams, was the Colts defensive coordinator and that is likely what caused Harris to be signed by Baltimore. He didn't play that much compared to his role with the Rams and then. poof, Harris was gone.
Harris said that Carson didn't get to play his scheme as much as he wanted, suggesting meddling by Head Coach Frank Kush which quickly led to Carson's departure from the Colts.In 1983 he played with the Washington Federals in the USFL and made 90 tackles with 2.5 sacks a forced fumble and a recovered fumble in his last pro season. However, before he signed with the Federals, Carson, once again, tried to recruit harris, offering him a shot to play with the Kansas City Chiefs but with no guarantees. Carson had been let go by the Colts but Harris chose the Spring league because he knew he could play and earn his money. Kansas City was a risk.
Harris planned to play in 1984, he was picked up by the Memphis Showboats in the USFL expansion draft and suited up in the exhibition season but didn't stick.
Harris was 6-1, 225, not big for that era, but big enough but in seeing his play observed would see a guy who could run really well, had good timing on dogs, and tackled well, with physicality as some coached might say. He was not really a guy who could take on off-tackle runs, but he could sure pursue, scrape and get to ball carriers behind the line of scrimmage as well as seal the edge and get into the backfield as evidenced by the clips we've posted.
Seeing him play in 1978 is quite fascinating because all he did was make plays on a poor team. Sometimes that is enough to recognize a player who didn't make a Pro Bowl or get any All-Pro consideration. And with Webster's research many more people who may not be familiar with Harris can see that season put into numbers.
Then throw in Harris' abilities in the nickel for the Rams in 1980-81 it's pretty clear Harris was a key role player in those seasons when, according to Carson, "We're about the best in the NFL in that package, it's the best thing we do".
Overall Harris had an interesting career for nine seasons in three professional leagues and though unofficial, once led the NFL in run/pass stuffs and one of the better totals Webster's research has found.
Pretty good.
Career stats—