Today PFJ looks back at one of the most impressive Two-Way Era players in NFL history- former Green Bay Packers halfback Verne Lewellen.

The six-foot-one, 182-pound Lewellen played 9 seasons with the Packers (102 games total) from 1924 to 1932. He played his entire career under Hall of Fame coach Curly Lambeau who used Lewellen to build his offense around. Lewellen also played 3 games with Red Grange’s New York Yankees at the end of the 1927 NFL season.

Looking at his career the overlooked Lewellen was one of the best all-around halfbacks to play during the NFL’s two-way era (1920-1945), leading the Packers to three straight NFL championships in 1929-1931.

One of the NFL’s best all-around halfbacks during the Two-Way Era, Lewellen was an excellent runner and receiver in Curly Lambeau’s Notre Dame box offense. He wasn’t asked to throw as often as his teammates Red Dunn and Lambeau himself, but could be effective when asked to pass. Playing in the secondary Lewellen was an equally excellent defensive player and tackler.

But what separated Lewellen from some of the other two-way halfbacks he was one of the best at his position performing the 2 most important aspects of the Two-Way Era: Punting (for field position) and Scoring!

Arguably the game’s best punter for the first three decades- maybe only surpassed by Sammy Baugh. When researching the newspaper accounts and game play-by-plays you can see that his punting skills truly affective the outcome of games. Accorded to the stats published in The Football Encyclopedia by David Neft, Richard Cohen, and Rick Korch, Lewellen averaged nearly 40-yards a punt from 1926-1931.

He often punted on 1st and 3rd down as much as he did on 4th down, and routinely kicked inside his opponents 45-yard line for field possession. Looking at his 1929 season one can see how Lewellen was a weapon punting on any down. According to play-by-plays from the Packers and the Green Bay Press-Gazette Lewellen punted 84 times in 1929. The breakdown was:

He also had a knack for the coffin corner kicks. “Lewellen was the greatest punter I ever saw. I never saw Jim Thorpe punt, but I saw a lot of others. I don’t think they kept any stats when he was punting, but I saw him punt 80 yards. I saw him punt the ball out on the five, the three, the 10,” said Mike Michalske, Packers Hall of Fame guard, to the Green Bay Press-Gazette in 1980. Arthur Daley, long-time sportswriter for the New York Times and an early Hall of Fame voter, wrote in 1962, “He was the finest punter these eyes ever saw.”

Besides Punting, Lewellen also excelled in putting points on the scoreboard.

In an Era (1920-1932) where the average points scored per game was 10 points per game, Lewellen was one of the all-time best at pointing points on the scoreboard. [Note: Era where NFL had passing restrictions pre-1933, limited offenses, pass behind LOS 5 yds.; incomplete pass in endzone turned ball over].

Lewellen was a scoring machine:

·        At the beginning of the 2021 NFL season, Lewellen still ranks number 11th all-time in Packers Touchdowns Scored, although he hasn’t scored a TD in 88 years.

Another special part of Lewellen’s impact was helping Green Bay win games. Because he scored touchdowns and help win the field possession battle, Lewellen guided the Packers to 3 straight NFL Championships, 1929-1931. During those three seasons, the Packers went an incredible 34-5-2. Over his nine seasons, the Packers went a combined 79-26-10, winning .75% of his games. He never had a losing season. Just as impressive were the games where he scored a touchdown. 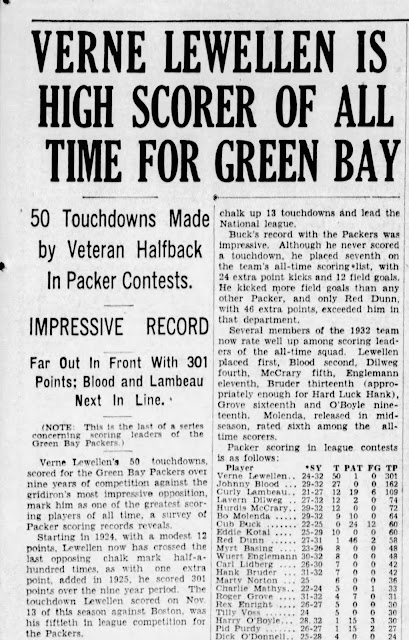 To be expected Lewellen was one of the most decorated halfbacks in the two-way era, earning First-team All-Pro honors from several media outlets during his time.

Green Bay Press-Gazette: 1925
Milwaukee Sentinel: 1930
In 1970 he was elected to the Packers Hall of Fame. The only honor he didn’t receive was the NFL’s All-Decade Team for the 1920s which is unfortunate because Lewellen was equal or better than the players they selected—the halfbacks chosen were Red Grange, Jim Thorpe, Curly Lambeau, & Joe Guyon.

Lewellen also had a signature moment in his career that showed off his special skills. Late in 1929, on November 24th, the undefeated Packers (9-0) played the unbeaten New York Giants (8-0-1) for first place in the NFL. Although there wasn’t an NFL Championship Game at this time, essentially the winner of this game was going to be the champs. 25,000 fans showed up at the Polo Grounds to watch.

Lewellen went beyond the call of duty. Due to an injury starting quarterback Red Dunn missed the game, so Lambeau moved Lewellen to quarterback, Johnny Blood played halfback with Hurdis McCrary, while Bo Molenda at fullback. The Packers didn’t miss a beat with Lewellen guiding the team.

Punting was the key of the game as Lewellen kept the ball away from Giants Hall of Fame quarterback Benny Friedman who Lewellen outplayed in a match-up of the NFL’s two best players. Friedman threw for an NFL record 20 TDs in 1929, including one in this game, but was out-shined by Lewellen throughout this contest. Watching the game film of this game Lewellen was very impressive with his directional punting, considering the Polo Grounds field was very muddy. Lewellen’s punting stats were:

In the first quarter Lewellen threw a 4-yard TD pass to Herdis McCrary for the game’s first score (7-0). Later in the 4th quarter, with the Packers leading 7-6, Lewellen helped Green Bay on a scoring march of 80 yards on 15 plays. He accounted for 59 of the 80 yards (14 rushing, 15 receiving, 30 passing) that led to a touchdown and a 14-6 lead. The Packers would add another TD to close out the victory in the most important game of the 1929 NFL season.

The Packers would go on to win the 1929 NFL Championship- the franchise first-ever NFL title. The following day newspapers in New York wrote mostly about the play of Lewellen.

Looking back at the career of Verne Lewellen you can see why he is considered one of the best halfbacks of the two-way era. Even his peers could see his greatness:

“I don’t recall many spectacular incidents involving Lewellen – probably because he was always spectacular.”

Johnny Blood (to the Press-Gazette’s Art Daley upon being informed he was voted into Canton as a charter member in 1963; Daley was Green Bay’s representative on the Pro Football Hall of Fame Selection Committee from 1963 to 1998):

“Verne Lewellen should have been in there in front of me and (Cal) Hubbard…Lewellen should be in the Hall of Fame just on his punting ability. He'd be an All-Pro punter if he played today. But, remember, he did everything else, too, and he did it all well. He was an excellent runner, a good passer, a good receiver, and a hell of a defensive back."

“Defensively, offensively – of the players we had in the old days, Lewellen was No. 1. And I’m not alone in saying that. Any of the old-timers I’ve talked to say the same thing. The reason he is so often mentioned as a punter is because his equal hasn’t shown up yet. From 60 yards, if he aimed to put it out of bounds on the 5-yard line, he’d generally make it. He had almost dead accuracy. He was way ahead of his time in ability.”

“Many times, (Lewellen) pulled us out of a hole – not only with his kicking, but by slashing through the line. We could call on him practically any time … He turned out to be a sensational punter, which is one of the things Curly was looking for, because in those days you tried to kick the ball out of bounds … And he was a great football player, and should be in the (Pro Football) Hall of Fame. And I’m sure the day will come when he will be in there.” 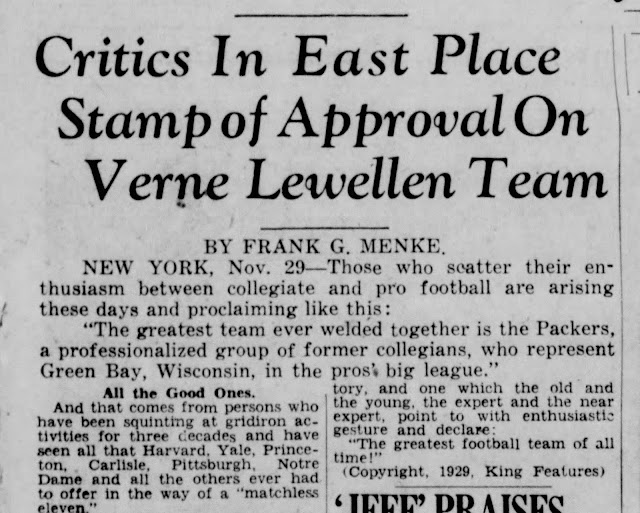