By John Turney
When Dave Washington entered the NFL he was 6-5. Now? He's 6-7. He continued to grow after his NFL career. His growth plates didn't close.
Anyway, that didn't have anything to do with his career, unless it was happening during his career which we don't know if it did or didn't, we found it interesting.
Washington played for Denver, Buffalo, San Francisco, Detroit, and New Orleans. In the last two stops he was mostly a nickel linebacker or dime linebacker depending on the situation. His height made him tough to through over and he had good range as well and could get some pressure when be dogged,
Before that, he was usually a starter but his forte was on passing downs, covering, or rushing which likely led to his transition to a situational player later in his career.
As a rookie for the Broncos, he made a lot of plays—quickly. In his first NFL game, he sacked fellow rookie Terry Bradshaw twice, one was for safety, he deflected a pass and stuff a run for an 8-yard loss, and also has a tackle on kickoff coverage. We cannot say for sure but we would wager it is still the best first game of any linebacker in Bronco history including Von Miller, Bradley Chubb. 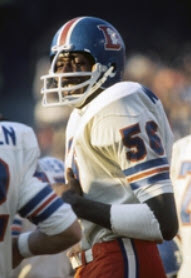 His season wasn't bad either, totaling 54 tacklers, 5½ sacks, and 7 stuffs and 8 passes defended playing right linebacker. He certainly made good used of his 6-5, 223-pounds, and 4.6 his speed.
In 1971 he moved to the left side and he played less on defense but did play some offense as a tight end. After the season he was traded to the Bills for Al Andrews. He started half the games for the Bills and was pretty productive with 10 stuffs, a career-high. In 1973 he broke an arm and missed most of the season. 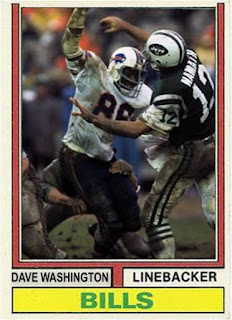 He was Second-team All-AFC in 1974 and scored two defensive touchdowns, one on a pick ad one on a fumble recovery. He also blocked a pair of kicks. He was seemingly on Howard Cosell's lips on MNF's Halftime Highlights every other week that season. The Bills defense was pretty good and the Bills made the playoffs in 1974 but lost to the superior Steelers in December.
Even though he was a key player on the '74 defense he was shipped to the 49ers for a fifth-round pick. Washington had no idea why he was traded, "I don't know why. I ran back two touchdowns for touchdowns, blocked about five kicks, I really thought it was one of my better seasons". (He only blocked two kicks, but guys often stretch their stats, maybe he was counting preseason).
However, Washington had not reported to Bill camp due to complications in his wife's pregnancy. It seems the Bills were not very patient in this and found a team ready to make a deal.
The Bills did draft two linebackers in their first two rounds of the draft and another on the fifth round which may have made Washington expendable.

In San Francisco, Dave Wilcox had retired so his left linebacker spot was open and possibly to be filled by Skip Vanderbundt or perhaps Washington, and the right side starter in 1973 and 1974 was Willie Harper. Washington had played mostly right side in his career but did have experience at left linebacker in 1971, but the weak side was his natural position.
Washington announced he was not there to be a backup, that he was going to win a starting position, and he did—starting all fourteen games in 1975 but sometimes Willie Harper would spell him on early downs at right linebacker. harper was nicked early and Washington played so well early he held off Harper the rest of the season.
He did well, doing his think, knocking down a pass, messing up the passing game, making some plays in the backfield finishing with 67 tackles, six stuffs, five passes defended and blocking three kicks.
He was part of the record-setting 49er defenses in 1976, playing weakside linebacker, moving from side to side (away from the tight end), and playing in the nickel. In that scheme, he had a career-high 95 tackles, 5 sacks, and 8 pass deflections and blocked three kicks for the second consecutive season. It was enough for him to be voted an alternate to the Pro Bowl.
We read and see posts about Pro Bowls being a "joke" or popularity contests from time to time and while we have known for ages there are sometimes flaws in the post-season honors in the NFL, either in the All-Pro voting or Pro Bowl voting. However, the overall condemnation of it by no-little fans or even writers because their guy or someone from "their" team got snubbed gets old.
Time and time again we see someone who pops up as a one-time Pro Bowler or as an alternate and then see some clips or check the stats and see that player did, indeed, have a good season. Maybe in this case Washington did have as good a season or wasn't as good a player as Isiah Robertson, Chris Hanburger or Brad van Pelt or even Matt Blair who was All-NFC by one organization.
But when you review what he did, Washington getting enough support to be an alternate seems pretty astute by the NFC coaches. seems like anything but a "joke". And we've found that year-in and year-out. While not perfect, it's a reasonable fair measure when one looks at not just the Pro Bowl or Associated Press teams, but also the NEA, PFWA, NEA, UPI, Pro Football Weekly, or others. If a guy had a good year it is rare that none of the organizations gave him at least an honorable mention. The flaw is when the critic only looks at the Pro Bowl or the AP teams only. When you limit where you look you limit your knowledge.
Regardless (rant over) Washington had a helluva of a year in 1976.
In 1977 the defensive no longer flopped linebackers and Washington played on the right side, but after nine games he suffered a serious hip injury that required surgery and missed the final five games. Tommy Hart slumped, the offense really slumped. It just was a step backward.
The Lions traded for Washington (sending a fifth-round pick to the 49ers for him) and he became their pass defending specialist, just starting three games in 1978. He'd roam around behind the line of scrimmage, fake a dog, drop or vice-versa, use his height to get in the passing lanes, try and help the Silver Rush get an extra heartbeat to get to the quarterback. And it helped a lot.
The line set a team sack record which still stands (like the 49ers 1976 sack record still stands to this day) and anytime the coverage can cause the slightest but if hesitation in the quarterback, it helps the rushers and that was by-and-large Washington's role. 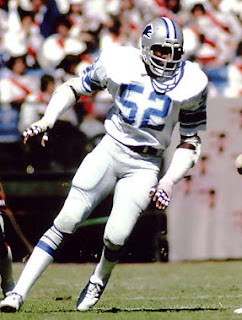 His role in 1979 was the same but he was, missed more than half the season and not invited back for 1980. The Saints signed him to do what he did best, play in sub defenses.
The Saints liked the dime and played it more than the nickel and Washington was the lone linebacker on the field, but they just didn't use it a lot, but his 6-5 (6-6 by then?) presence is seen because of his lanky frame would mug the line and dog or drop and cover a back or go to a zone. He was hard to miss.
He was not the first nickel linebacker specialist, there were some others before him but he transitioned into it and was among the first who did it, and he did it as a specialist for three years at the end of his career which just might be an NFL first.
Overall, Washington had an interesting career and did some notable things and was fun to watch, almost like an NBA forward on the field.
Career stats— 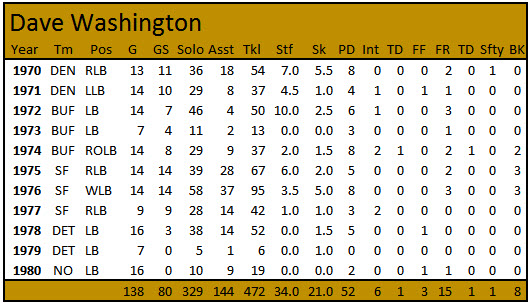