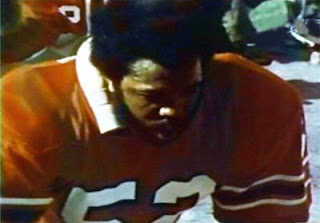 Dewey McClain started a handful of games his rookie season but his role, his NFL Legacy. is his part in the so-called "Gritz Blitz" defense.
The 1977 Falcons defense set the NFL record for the fewest points allowed in a season, 129, and did so, in large part, due to an aggressive blitzing scheme which they ran out of both 4-man and 3-man lines.
From 1977 through 1979 the Falcons were listed as a base 4-3 team but in passing downs, they usually went with a 33 nickel and brought in Dewey McClain as a combination rusher/blitzer opposite Greg Brezina, who was the starter in the 4-3 base.
In that 30 sub (33 nickel) any of the linebackers or even the safties could come in any combination. Greg Brezina who had 8½ in his career prior to 1977 had 17½ in his final three seasons, including 9 in 1978.
Robert Pennywell, who was the left linebacker in the 4-3 in 1977 had three sacks that year but in 1978 he had six. He was the MIKE in the 4-3 and the inside 'backer in the 30 sub.
Fulton Kuykendall was the left linebacker in base, who usually left in the 30 subs had four sacks himself. Throw in the safeties who totaled for and the 'backers and DBs accounted for far more of the 47 sacks than the defensive line (who had a total of 16½ sacks among them).
The top three sackers in 1978 were Brezine (9), McClain (7½), and Pennywell (6). We have not checked but if the top three guys were linebackers in the same teams the same year, we'd be mildly surprised.
An enthusiastic player, maybe too much so sometimes, he had a reputation for drawing flags, especially in 1978, and especially late-hit or personal fouls. Fulton Kuykendall told the media that year, "Dewey is exceptionally crazy". That is quite something considering Kuykendall's nickname was  "Captain Crazy". McClain was sometimes called "Screwy Dewey".
Though he didn't have the sack numbers in 1979 the role was the same as the previous year. But considering a role player having a 55-tackle, 7½ sack, four fumble recovery-season (and throw in a forced fumble and a safety) it was a tough season to follow.
That '78 campaign stands as one of the best single seasons you will find for a nickel linebacker and we've looked. Washington's Monte Coleman had several, Mike Cladwell as well. There was Hollywood Henderson in 1975-76, Joe Harris in 1980-81, Anthony Dickerson of Dallas, the Broncos Ken Woodard among others had success in the nickel 'backer role. But McCain's 1978 is among the best.
In 1980, though McClain didn't get to play much due to the rise of Joel Williams and rookie Al Richardson who were both just superb. Williams dogged from the right (16 sacks) and Richardson did most of the dropping (7 picks) so there was not the need for the subpackage as there had been in the past. The Falcons committed to the 3-4 full time and they had two young, fast, very small (average weight: 215 pounds) that were very effective. So, McClain sat.
Early in 1981 McClain was traded to the Packers but was injured and his time in the NFL was over.

McClain ended his football career in the USFL, playing a year for the Oakland Invaders and another for the Oklahoma Outlaws and he started for both. 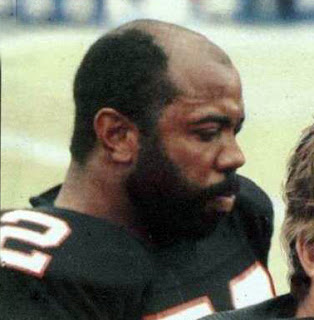 He transitioned into politics and is currently a Member of the Georgia House of Representatives and prior to that was involved in Labor issues and other ventures.
Dewey McClain—And impressive fellow mot screwy at all.
Posted by John Turney at 2:51 PM