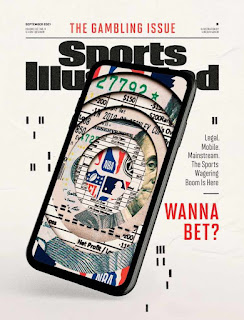 Pleasantly surprised that the September Issue of Sports Illustrated arrived the other day, especially since my subscription has expired.

Exceptional writer L. Jon Wertheim is the main writer; though there are others that contributed to the articles on gambling. Mr. Wertheim has been with SI for many years, and he has written books such as This Is Your Brain on Sports & Rookie Bookie.

By this time all of you know or should know my vocation was coaching/teaching. Defining terms is always a challenge, and as such defining work ethic, competitive nature, focus, and finally discipline is difficult for all the reasons you can imagine.

Rather than detail my work ethic, competitive nature, etc...let's just say serious and intense fit me like a glove.

Why gamble? The answer to that question would be a long one, yet was very intrigued by the time I was in my late 30's about betting on horses. The hours of study, and the hours spent at the track seem like a long time ago.

Can visual some races in the memory banks like it was yesterday. Mistakes? Hell yes, but overall over the course of my 20 years betting on horses was a journey worth taking. Though could go hours on this topic, learned that my chances of success came on the biggest days of the year—Kentucky Derby and Breeder's Cup. 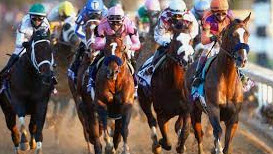 Betting the horses day to day was a grind that was not only draining emotionally but struggled mightily to make a profit. Basketball? Baseball? tried those two, but did not fare well.

College football? Oh yeah, when my offshore book allowed me to do moneyline wagering on multiple teams. Years ago as Paul Lionel Zimmerman and myself got to know each other better, came to realize he not only was fascinated with pro football wagers, he was not allowed to gamble due to his contract with SI. 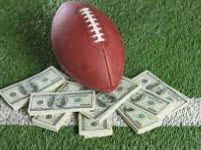 Now back to the gambling issue! Wertheim details the "Big Picture", while Ben Pickman writes about the bettors. Liz Lewis and Meghan Rominger did research, and cover "The Baddest of the Bad". All in all a very entertaining issue, and for those of you who enjoy gambling you probably should get a copy.

When SI releases its Pro Football Issue, and the writer's list what they believe to be each teams' win total, will respond in my "Tuesday Tidbits" column with my thoughts on which team and/or teams will win more or lose more. In closing, story time from my youth, and yes dovetails with gambling.

Late autumn on a Saturday morning at the Junior High School I attended with a few friends for a sandlot tackle football game. The two skills that over the years came to be known for was tackling and catching the ball.

One of my best friends, and team mate since Junior High...has arranged this game, and one of our opponents has a big mouth and is an ego-driven idiot who claims no one can tackle him. Yes, he has size, and he has some speed, but have been down this road many times already in my life.

Not being an impressive specimen of manhood at the age of seventeen (5' 11", 155 lbs) they thought they would dominate me and us. Sheer folly? Stupidity? Whatever.....my friend was lightning quick, ran terrific routes, and had moves galore. Was easy getting the ball to him, and he scored almost all of our touchdowns.

The ego-driven idiot ran hard, but over the course of the game tackled him every time he carried the ball. Not sure he ever scored? He thought he would wear me down, yet the traits that carried me through was stamina and heart. They finally gave up, humiliated, and did congratulate us, and stated to my friend about how well I played.

Then...with my eyes becoming as big as silver dollars, witnessed one of the opponents pulling a $20 out of his pocket—remember this is the autumn of '68...twenty bucks is big money. My friend wagered two bucks on us at 10-1 that we would win as he knew that it did not matter to me if money was at stake...anyone who carried the ball was going to go down.

What do I get out of this I asked? Damn that hamburger and coke tasted great as we ate and talked about our victory.