CAN'T TELL A PLAYER WITHOUT A SCORECARD: NFL Game Programs 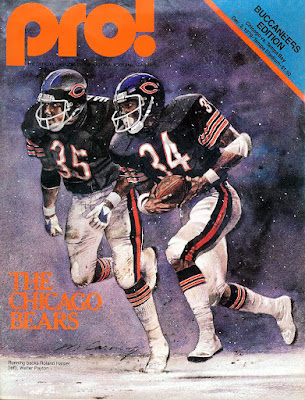 The title of this short saga is one of the most famous cliches in the history of the sport. Specifically, this saga will detail the changes/improvements in NFL Game Programs throughout the '60s into the '80s.

Have a few programs from the late '40s and some from the '50s; with a listing of the player roster for both teams, and his jersey number. A "thumbnail" bio-sketch was sometimes included and some of those bios are valuable since they state how the player was acquired. During the early '60s the league under the direction of Pete Rozelle was called "National Football League Illustrated".

Rozelle had worked with a very talented and creative man in Dave Boss during his time with the Rams, and this working relationship continued when Rozelle became the commissioner of the league. Some of the teams had their own unique style of game programs, and two of the best examples are the Colts and Redskins.

The program the Colts put out was slightly smaller, and had a color photo on the cover. The October 4th, 1964 cover shows left corner Bobby Boyd as the holder for the kicker...very cool. 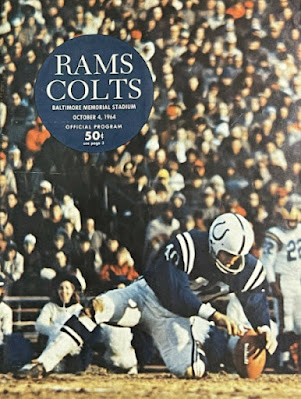 The Washington Redskins used the Walton & Hoke Art Studio for their artistic covers. Here are a couple examples of those from 1965— 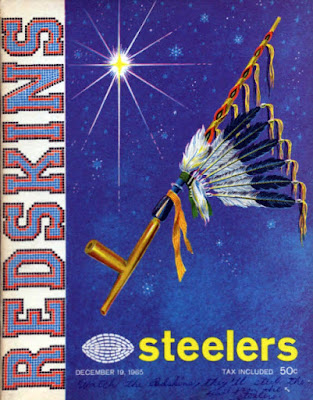 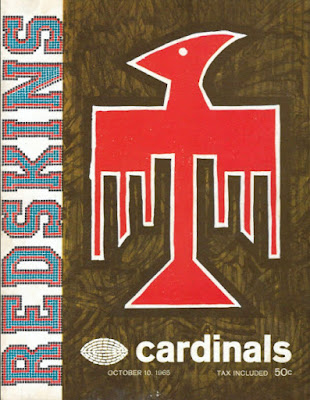 Somewhere in my file cabinet is a letter I received years ago from Dave Boss and someday will find the damn thing, and share with all of you his responses to my comments and questions.

Dave Boss was truly a talented and creative artist, and beginning in 1966 the NFL was about to see his talents in a new way. His posters of each team portrayed each team in a new way and were the cover of each team's home game program. No doubt we all have our favorites from the ones he did—for me, the Philadelphia Eagles painting of a quarterback was mine. 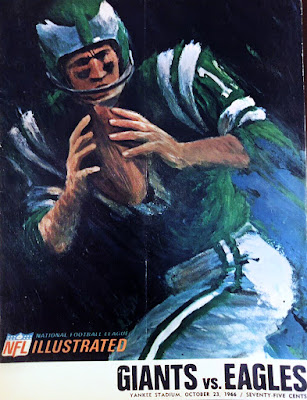 The NFL expanded again in 1967, and the covers were again paintings—the Cardinals vs. Steelers game program for November 12th, 1967 was done by Terry Smith.

Before detailing that game program, time to quote my talented artistic friend John Richards. Ready? here goes,—Said Richards, "Program art varied with the city, but most designs fell under two categories—One, the cover art on many of these involve scenarios in which cartoons representing both teams are in opposition, and two, then there are the dramatic "action paintings", which always portrayed one of two completely anonymous players with mostly unrecognizable uniforms." 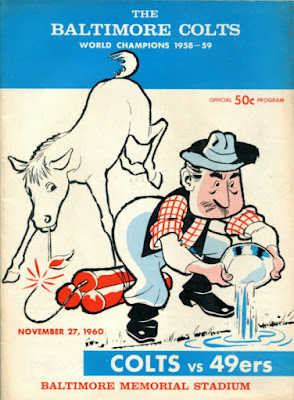 Richards continues, "In 1961 one can find advancement with the manipulation of photographs. This is the use of a process camera to alter photographs through a variety of techniques.

With posterization, they remove mid-tones to create a dynamic high contrast image that can be printed with one color. That can be applied over another contrasting image and color. It has a contemporary modern graphic look and now fans can identify players individually. The Colts vs. Packers program from November 5, 1961, is a classic example of a two-color (black & light green) high contrast print manipulating a single photograph". 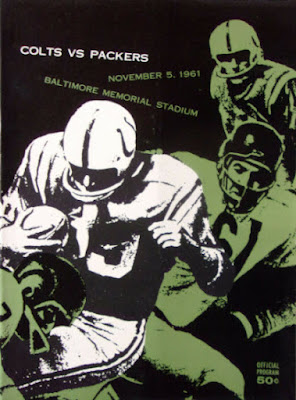 By 1963 we see the introduction of four-color printed photographic covers. John detailed Dave Boss acrylic poster paintings and how the league wanted to "Get as much bang for their poster buck".

Examples of NFL Illustrated art covers from 1963-66, the last being a David Boss painting— 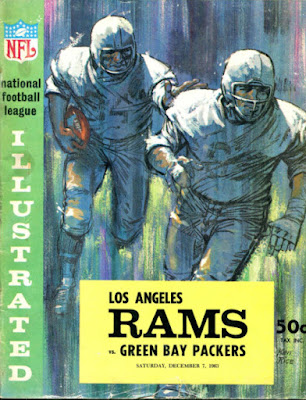 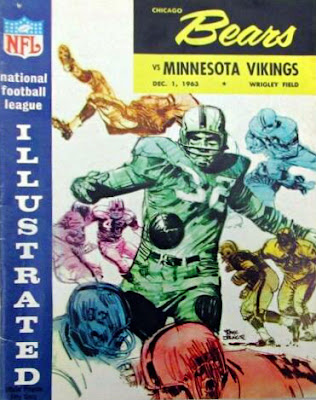 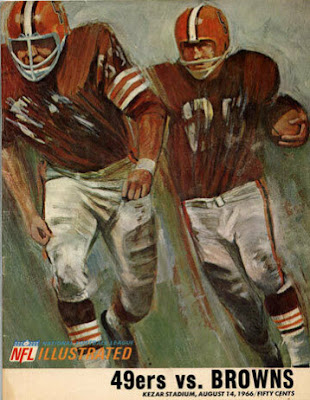 Returning to the Cardinals vs. Steelers November of '67 program. 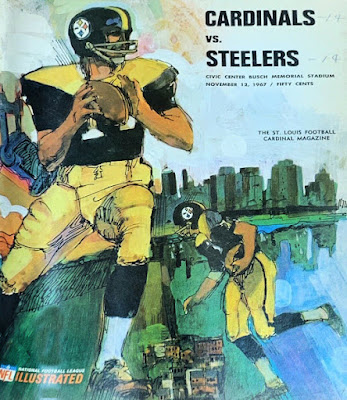 We now not only get the team rosters predicted starting line-ups and depth chart. Bios of the coaches, and stories about previous games. The detailed story on kicker Jim Bakken of the Cardinals against the Steelers historically was an outstanding example of improvements game programs now had. Add to that—the STATS! The listing of who leads the league in each of the categories gave the fan printed evidence of who was playing exceptional football. Then there are the black & white action photos from previous games and the individual photos of the players on the team.

All in all game programs by the mid-'60s have become a treasured resource.

The 1968 season brings about change again; as we have color photographs of the players from a team on the cover. 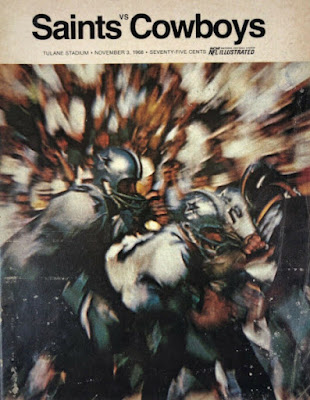 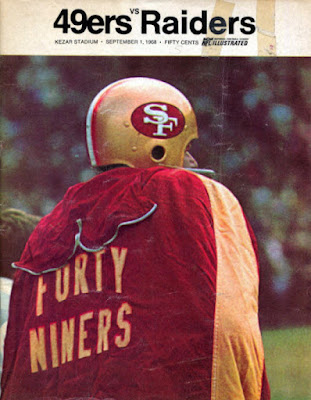 Many of them are exceptional, or at least I sure thought they were. Now back to John Richards, "The series of covers painted by Terry Smith are bold renderings that feel like a collage, incorporating many visual elements not just of football but the cities where they played. One can see the influence of the iconic graphic designer & illustrator Milton Glaser, who was shaking up the design world with his Push Pin Studios.

Smith's line work, color, and playful compositions have a fresh feel that capture some of the pop art aesthetics of the day, and now in '68 with more four-color printed photographs the league is changing once again. 1969 and NFL Properties has employed artists that become common names in the history of the league for their creativity. 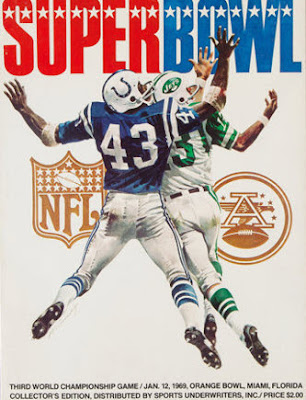 George Bartell's portraits with the light line work and liquid washes capture a nostalgic feel without being overly sentimental". 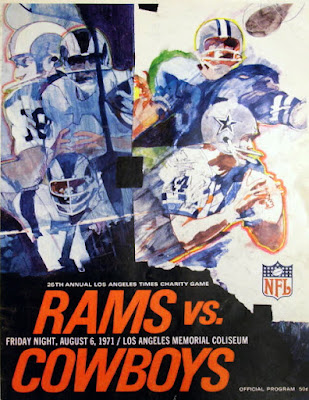 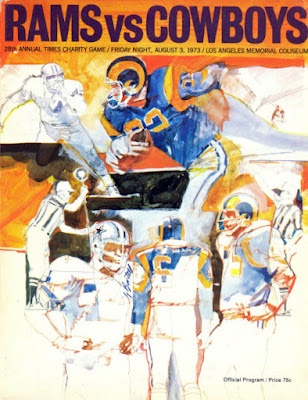 "Both of these artist's work would be ubiquitous during the following decade. As the NFL had grown in popularity, so had their public relations budget".

During the '70s the game programs became known as "Pro!", and continued to evolve and improve with photos, stats, and stories. 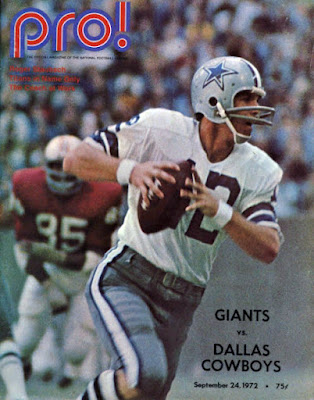 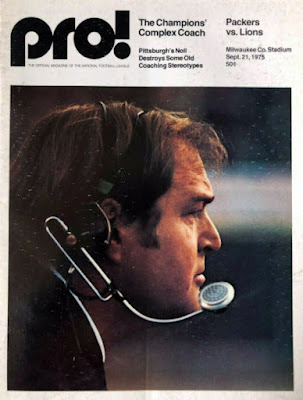 Finally, we come to "Gameday". The NFL as well all know is big business and the game programs have grown in size (number of pages), while still telling us who is wearing what number and playing what position. This saga will close with the value of these programs in doing my historical statistical research. There have been times when a research project takes a back seat to just the enjoyment of looking through the program. 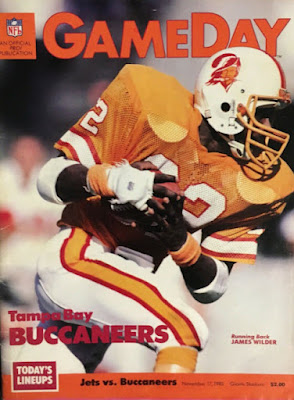 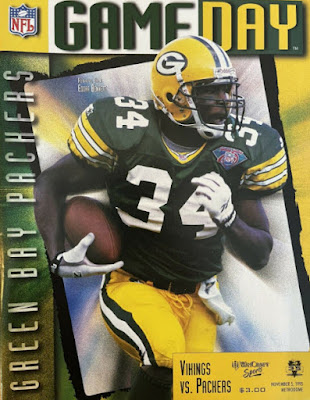 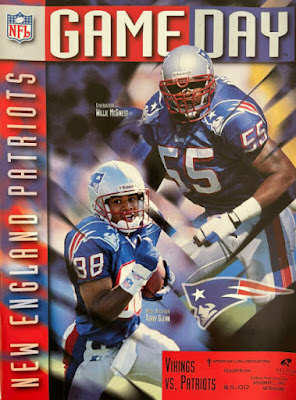 Thank you John Richards for your email detailing your thoughts on the history of the league's programs and artists. John does the artwork for PFRA's Coffin Corner and the new members of the Hall of Fame. He also did one helluva terrific job on the artwork for my book The Birth of Football's Modern 4-3 Defense. 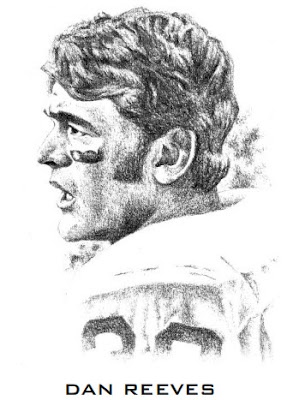 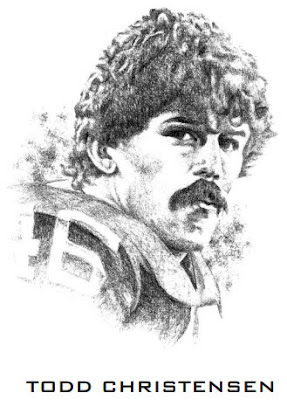