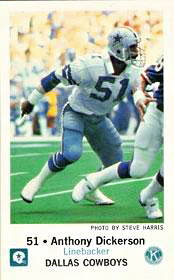 Anthony Dickerson was a great high school player at  Pearland High School which is located south of Houston. There he starred as a running back and linebacker.
He went on to  Henderson County JC and then transferred to Southern Methodist University where he was stellar for the Mustangs. His coach Ron Meyer said, "I have not been around all that long but he's the best linebacker I've ever coached".
Dickerson left SMU prior to his senior year after a reported dispute with Meyer and also,p purportedly to "feed his family" so Dickerson played a year in Canada in 1978 starting with being signed by Toronto then moving to the Stampeders. His coach in Calgary, Jack Gotta, was impressed with Dickerson's physical ability stating, "His 4.6 speed will be a big asset at corner linebacker. He can give is that pass coverage on the tight ends and slot backs and his quickness should give us punch in passing situations".
Gotta then went on to say that there were scouting reports that compared Dickerson to Hollywood Henderson. "If he's anything like that he'll be heard from".
Dickerson battled injuries early in the season but eventually began playing for Calgary with mixed results and was released. In September he was signed by Toronto on a "five-day trial" a CFL rule that allowed a free agent player to catch on to a team but he lasted just the five days being released after just one game.
In 1979 Dickerson was out of football working in Los Angeles then going to Houston to study business.
He got his chance in 1980 when Dallas offered him a contract  ($500 to sign and a salary of $28,500) and a chance to make the Dallas club.  Perhaps Dallas had the scouting reports comparing Dickerson to former Cowboy linebacker Thomas Henderson.
Dickerson did make the team and, and then some—he contributed quite a lot. He was tremendous on special teams and as a rookie earned a role in the Cowboys sub defenses, often he was the lone linebacker. His coach, Tom Landry, touted Dickerson's skill set this way, "He has such great movement, great speed, and good explosion".
The Fort Worth Star-Telegram printed that, "Anthony Dickerson has an uncanny ability to defend the pass, making him a perfect fit for Landrys 40 defense".
Dallas coaches told the media that he was the team's best athlete and Dallas had metrics for such things—timing players every year in forty-yard dashes and other drills. Though we often heard that Danny White was possibly the best all-around athlete for a long time as well. Call it a draw.
For three years Dickerson was the Cowboys nickel linebacker and he always seemed to be making plays, popping the ball loose, deflecting a pass, pressuring the quarterback, and so on. As we've noted there were several good nickel 'backers in that era, a couple of them were safeties, but Dickerson has to be one of the upper echelons of that group.
It should be noted the Cowboys pass defense received a lot of criticism in that era for giving up a lot of years, especially in 1981 with a couple of rookies starting in the secondary. However, it is key to remember the defensive passer rating (DPR) again Dallas was 63.8 in 1980 and 51.8 in 1981. As Paul Zimmerman noted before the 49ers-Dallas playoff game in 1981, "I think Dallas was very efficient against the pass" referring to the pickoffs and only allowing 17 touchdown passes (tied for eighth-best in NFL). True, they were 21st in passing yards allowed but first in interceptions with 37 and their DPR was the best as well.
The strike-shortened 1982 season was much the same as 1980 and 1981, Dallas advanced to the NFC Championship game and lost, but the defense was good but not as effective as in 1981, though the critics again were pointing out that it was not dominant like the Doomsday units of the late 1960s and 1970s.
In 1983 he won the weakside linebacker job and was a big-play machine. While not stout versus the run, he did the things he did as a role player and really filled up the tackle chart with not only solo and assisted tackles but sacks, stuffs (not kept then), sacks, forced fumbles, and even got a safety that won a game against Kenny Stabler and the Saints.
The following year he didn't play as well, and the Cowboys coaches noticed as did the Dallas media reporting that Dickerson was not playing like 1983. His sack total was down and in fairness Dickerson was bothered by a back injury early in the season, but after breaking out with 10.5 sacks and 82 tackles the differences were noticeable to the eye as well as in the boxscore.
In the Summer of 1985, there were whispers that the coaches preferred rookie second-round pick Jesse Penn and wanted him to fill the weak/right side linebacker position. The coaches must have thought Penn was ready to start and hold the position until first-round pick Bill Cannon was able to learn the complex Flex defense.
So, Dallas traded Dickerson to the Bills for "undisclosed draft choices". A year later, papers reported that to have been 1986 sixth and twelfth round picks. Ouch.
The trade angered Dickerson who felt he was "the best linebacker they had" and wanted to prove that with great play in Buffalo. It just did not happen. He was a backup but did play some in the nickel role but Darryl Talley was the predominant linebacker in sub defense until he took over for an injured Lucius Sanford.
In a late-season game against the Steelers Dickerson lost his only sack of the season. On a fourth-down play, he forced Pittsburgh quarterback Scott Campbell to fumble but Campbell was able to pick it up and throw for a first down which led to a field goal that gave the Steelers the lead for good.

Over the years we've seen a few sacks not credited due to that ruling, that a sack always ends a play, so if a quarterback is passing and the ball falls loose it's not a sack if he picks it up and runs for a gain or throws the ball. We get it, but it's just a random thing where a player did his job and due to a fortuitous bounce does not get the credit. That ball bounces a foot or two in a different direction and it's a sack.
Sidebar over.
Meanwhile, in back in Dallas Penn was not ready for prime time and Jeff Rohrer was the weakside 'backer that season since Billy Cannon was not ready and then had a career-ending neck injury at midseason (which turned out to be congenital) opening the door for Rohrer.
Dickerson was, however, good on special teams. But that was not enough. In July 1986 he was released and the Dolphins picked him up but that lasted maybe two weeks.
Sadly he passed away in 2019 due to complications revolving around a serious fall he took in his home. After his career, his only football connection was telling his story in Billy Joe DuPree's book The Unbroken Line which chronicles NFL retired players' issues including pensions and health care.
Career stats based on official NFL Gamebooks—

In the end, Dickerson was one of the top role players in the NFL for three years and a more-than-solid starter for a year. He did it with plenty of speed and athleticism and one thing is for sure—he was fun to watch with his diverse skill set. He's one of many we've recently feature that would fit in today's NFL.
And this is really something. Well done./
Posted by John Turney at 7:34 PM