OPINION—Top Players Not in the Hall of Fame 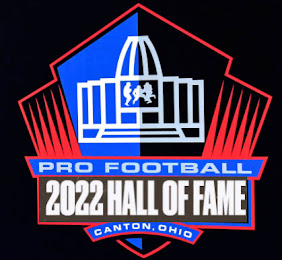 These types of articles are hard because there are always a lot of players with Hall of Fame credentials who are waiting to be voted in and it always begs the question of what are "Hall of Fame credentials"
Each voter has their own set of criteria ranging from subjective intangibles ("he changed the game", "can you tell the story or the NFL without him") to more provable intangibles (toughness, leadership, playing hurt, intelligence, innovations, etc.).
Then come the honors (All-Pro, Pro Bowls, MVPs, Player of the Year awards, etc) to the testimonials ("he was one of the top players I faced in my career" said a rival") to the jewelry ("he was part of two Super Bowl wins"), to the individual stats ("over a ten-year period, no one had more catches/sacks/rushing yards" etc.) and team success ("he was part of an offense that dominated football for four seasons").
Then there may be the scouting views ("scouts tell me that this guy was better than several of the safeties already in the Hall of Fame, even though he didn't get the Pro Bowls). This might also include the "eye test" as well.
All of those things are valid but all of those things need to be looked at closely. After all when there is a discussion for anyone that means the player is not a sure thing, a Lawrence Taylor, Ronnie Lott, Peyton Manning, and so on, i.e. a case needs to be made and comparisons and qualifications need to be asserted so that some coach's pet player does not get in ahead of someone more qualified, especially in the senior category where, at the moment, slots are very limited.
That said, here is a list of players, by position, are the top, but NOT the only ones that should be looked at the closest.
Center—Probably Jay Hilgenberg.
Thirteen seasons, three-times All-Pro, seven Pro Bowls, and a ring. His "eye test" seems slightly higher than Jeff Saturday who has similar credentials.
Guards—Bob Kuechenberg (two All-Pros, six Pro Bowls) or Ed White (two All-Pros, four Pro Bowls) but there are a couple more we like. Doug Wilkerson is one, but we could name a few more.
Tackles—Mike Kenn, Joe Jacoby, and Tony Boselli.
Boselli, we hope gets in this year in the "Honor the Queue" principle. He was one of the top ten last year and we think those four should get in this year plus one more, either from the final 15 or perhaps a first-ballot Demarcus Ware. No dog in that fight, but that way it would be a meat-and-potatoes class and no more waiting for Boselli.
Kenn had more "blue" seasons than a couple tackles in the Hall was All-Pro in 1980 and 1991 (eleven years apart) and in between. One of the best pass blockers ever.  Jacoby was a solid pass protector but a dominant run blocker who was excellent on the right side and was a very good guard when used to move.
We hear about George Kunz, and he was good but he was about maybe the fifth or sixth best of his era behind Rayfield Wright, Dan Dierdorf, Ron Yary, Art Shell, and maybe even, skill set-wise Russ Washington whereas Kenn and Jacoby were both top five of their era.
Tight end—Todd Christensen or Russ Francis.
Christensen has the stats but Francis was more complete.
Wide receivers—Recent wide receivers have it too easy. Stats are bloated and no one has done a great job normalizing them to account for the "inflation". As a result, fans and even writers spout off stats that include 1,200-yard years like it means the same as it did in 1985 or even 1995.
Right now there are second-chair receivers on the verge of getting in the Hall of Fame when there are guys who had a tougher row to hoe still waiting and never getting a chance.
For receivers, it seems the eye test is not always applied.
So, our picks are Del Shofner and Cliff Branch. Check the All-Pros, which is how they compared to their peers at the time. It is not the only metric but it does mean something. Also, in that era yards-per-catch was a thing. Check those out. Branch has three rings and played in a dead-ball era for half his career.
Running backs—Roger Craig seems like the most accomplished with rings, stats, eye-test, honors, and so on. But he had some flaws in his career, too.
The modern guys, how do you separate them? Fred Taylor, Tiki Barber, Steven Jackson, Corey Dillon, Warrick Dunn, Ricky Watters, Jamal Lewis, Eddie George, and Shaun Alexander all have some nuggets in their careers but can they be separated?
Quarterbacks—There are a lot of quarterbacks who are very hard to separate. They were very good at times, winning MVPs or some sort, but also had some poor seasons, too, but some of them even have a ring, even two. Roman Gabriel, John Brodie, Ken Anderson, Joe Theismann, Phil Simms, Randall Cunningham, Charlie Conerly, to name several.
So, it's all or none. How about none and we take a couple of HOFers out to make it fair?
Defensive ends—Richard Seymour (30 end)
The second of our "respect the queue" players. he was in the top 10 last year and hopefully will get in. There is no reason we can see to make him wait. A hard-nosed player, moved around, was a tight-5 technique in base, a 3 technique in nickel but also would played over the center. A leader, has the jewelry, the scout's approval. Has everything but the stats but played a position that does not generate eye-popping stats. Put him in.
(click to enlarge) 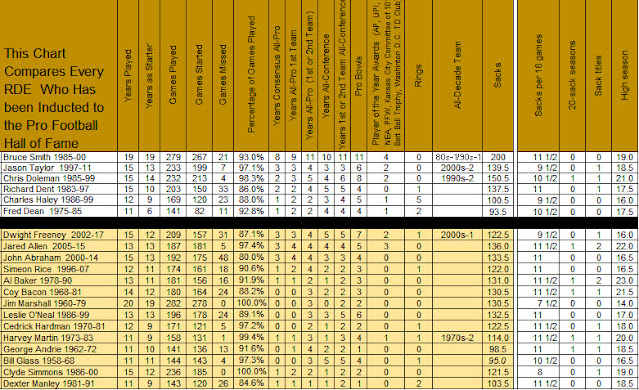 You can ignore Bruce Smith, he's off the chart and he was in a 3-4 a lot and was just different than the rest on this list.
Looking at the blind side guys it is amazing how close they are in credentials—Allen, Bacon, Baker, and Martin all had 20-sack seasons. Eleven of the 14 we list in the non-Hall of Fame categories average between 10½ and 11½ sacks per 16 games.
You can see the career sacks and the honors and the games played, started and games missed as well. We will not pick any of them and let the voters sort it all out.
Defensive tackles—Bryant Young, Fred Smerlas (nose)
Smerlas was an innovator but no one knows it. His techniques were copied around the NFL, changing the middle guard techniques to an aggressive, attacking nose tackle position. As a pure 3-4 nose tackle, not a 4-3 shade, no one had played in, started more games at the position or made First-team All-Pro or made more Pro Bowls at the position.
Bryant Young was a left tackle when Warren Sapp was a three-technique. Young had to shade the nose perhaps half the time, rather than just get upfield. Still, he had 89.5 sacks (Sapp had 96.5) and he was better against the run. He was tough, came back from a devastating broken leg and was far better in the time after their All-pro runs when Sapp really dropped off.
Inside linebackers—Randy Gradishar was the NFL's consensus 1978 Defensive Player of the year and was third in 1977. He has more MV shares than. His peak was extremely high. He was in the top 10 in 2003 and a top 15 guy. If the voters respect the queue hold, he should be the senior nominee he's been waiting for two decades and was super close in 2003.
Zach Thomas, he was in the top ten in 2021 and should get in, like Boselli, "respect the queue"!. While never a consensus All-pro he still had good stats and was able to make the second slot All-Pro five times.
We think Patrick Willis had a higher peak than Thomas but that does not mean both should not get in. Injuries shortened Willis' career but at his best, he was a superb inside 'backer who excelled at coverage and was a sideline to sideline player. Would love to see him get in very soon.
Outside linebackers—Demarcus Ware
He should get in soon, if not this year, then next.
Of course, we've always been in Chuck Howley's corner. Yes, we know, another Cowboy, but we think he has the good over the other 4-3 outside linebackers that are waiting in terms of skill set, honors and stats as well.
Cornerbacks—The best cornerback not in the Hall of Fame in our view is Albert Lewis. He was great and man and zone, long arms, could run supports, blitz from the slot, and was devastating on special teams, the best punt blocker ever. He's gotten no traction and we're afraid he's going to end up in the senior pool which would just be too bad.
Next? Lester Hayes or Louis Wright or Lemar Parrish, your pick.
Here is a list of corners, though some are not eligible and a couple are still active however we included them on the chart for comparison purposes—
(click to enlarge) 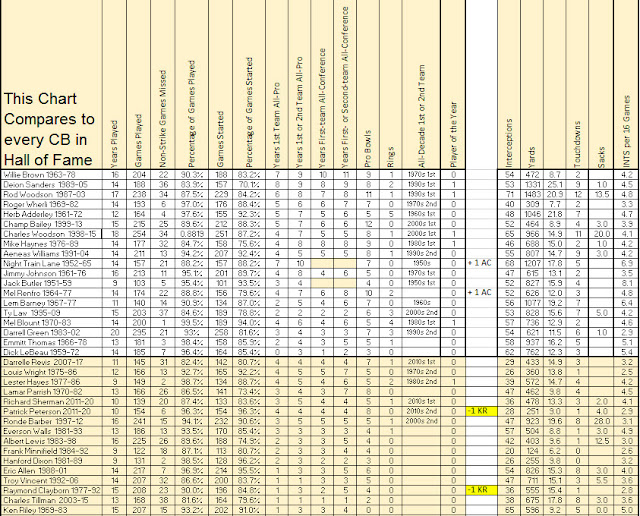 We see Ken Riley's name thrown around and he was close last year, when the senior advisor was Dick LeBeau, his position coach in Cincinnati. And maybe this is a place for what Proscout calls a "long-term red". He does have the stats, he has 65 career picks and Dave Brown another long-term corner has 62, don't forget. However, is that the sole thing (stats) for Hall of Fame qualifications?
We hear all sorts of reasons Riley didn't get post-season honors, among them that it was hard to break through with Hall of Fame corners like Mel Blount, Emmitt Thomas, Jimmy Johnson to compete with. However, Riley also lost out to Monte Jackson, Rolland Lawrence, Hates, Wright, Parrish, Mark Haynes, Pat Thomas, Everson Walls, and Louis Breeden as well.
Safeties—LeRoy Butler.
We don't but the "he changed the game" thing because Fritz Shurmur did the same things with safeties long before he got to Green Bay that he did with Butler, but still, Butler is worthy and is another top ten respect the queue" guy
The player with the best peak is Nolan Cromwell, but a knee injury in 1984 stopped his All-Pro/Pro Bowl streak. While still "blue" in 1985 and 1986 he was forgotten by then. So he really has zero, even less, and zero momentum. We mention him because from 1979-83 no safety was better than he was and no safety did more things from being a free safety, to slot corner, to a linebacker in the "buffalo nickel" to being the best holder ever, to an excellent punt blocker and to this day he, Ed Reed and jack Christensen are the top three "range" safeties ever.
(click to enlarge) 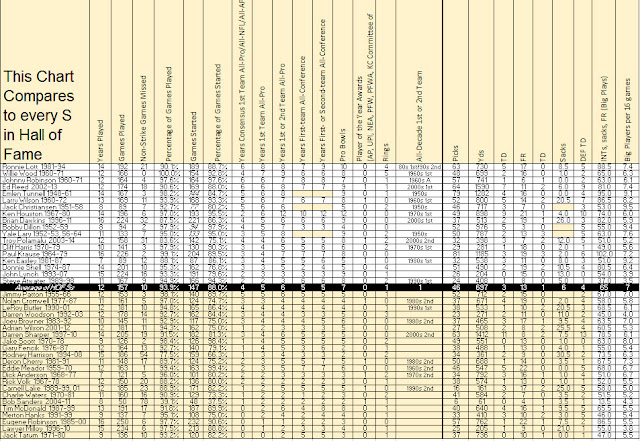 Kickers—Nick Lowery
He has all the metrics and no one knows it. He doesn't have a chance but if folks would investigate the work by Chase Stuart and Rupert Patrick. Folks will break down stats by quarterbacks ad nauseam but don't look at kickers very often.
Posted by John Turney at 8:46 PM