Clark Judge wrote a great piece for Sports Illustrated today quoting Rick Gosselin expressing his frustration for the senior category backlog for worthy players who are awaiting a fair shot at discussion and induction and giving Gosselin's solution to the issue.
Voters may disagree as to the number who are waiting, that is fair. But what is not really in dispute is that there are far more players waiting than coaches and contributors.
The universe of waiting players is far larger than waiting coaches. Again the exact numbers may be disputed but the magnitude of the difference is not.
A few years ago the Board of Directors and Trustees of the Pro Football Hall of fame reduced the number of players that can be presented from the senior committee from two to one and added a coaches category, thinking it was unfair for coaches to have to compete with players. Fair enough.
However, to have one coach every year seems like that would exhaust the number of candidates pretty quickly and that has shown to be the case. Maybe not at this exact moment, but we're getting there.
But the problem is the senior pool is growing and even voters are frustrated that three- and four-time and five-time All-Pros cannot breakthrough. And then there are players with good statistical cases and players who perhaps are linemen who don't have stats but may have good testimonial cases or "scouting report" cases that have no shot.
Here is a quick and dirty chart we make, forget the order in which the names appear, those can be fluid and would happen according to the will of the voters, the chart, at the top, is maybe our preference, but at the end are just names that are worthy with little thought as to the order. As folks can see the names, even if they are inducted two a year and terrific all the way until the 2030s and we could have gone further.
But the names for the other category kind of ran out. Sure, but then Bill Belichick and others become eligible but we think the point is made. Perhaps some disagree, we don't know, but even if you think "you guy" from "you team" should not be in 2029 and should be in 2022, fine. The point is this, as for now, is fantasy, this is TWO per Year.
Imagine it as ONE per year, as the current setup is until at least 2025 and as Gosselin points out in the article we linked to no one knows what lies beyond 2025. It could go back to two, and we hope it does, but there is no reason to wait in our view.

Even if it changes then to two per season we lose three slots. 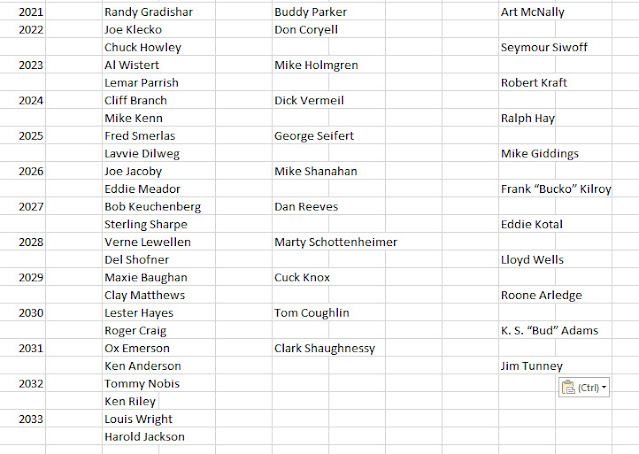 The only solution is for the Hall of Fame brass to act now. They need to have an emergency meeting to expand the seniors to two per year and rotate coaches and contributors.
It fairly serves the coaches and contributors (they don't compete with players like they used to) and it is fair to the perhaps 100 or so (maybe more, maybe less) players deemed worthy on some counts of the Hall of Fame.
Gosselin's solution is three seniors a year for the next ten years, And we support that 100%. No, 200%. That would also work and we applaud Gosselin for that suggestion.
One way that could work so as not to stress the limits of Canton/Akron and the space at hotels and venues for parties, etc. would be one of the slots could be a "super senior"—a slot for players pre-WWII for at least the first five years. They could be honored with a video and surely their descendants would not take up much room. Sad to say many of the players we are talking about are deceased so the accommodations would naturally be less than for a living, more popular player.
Remember this is for the Hall—getting the right players in, those that make the Hall of Fame less due to the lack of their presence no about parties or team pride by partisan fans or other ancillary needs. It's about going to the Hall and feeling the lack because Five-time All-Pro player A is not there. Or First-team All-Decade player B is not there.
So, in our view, either change would be excellent.
A change can be done without criticism, without name-calling, and without blame or accusation. It can easily be done if there is the will to do it. Surely they can have a Zoom meeting in the COVID plagues days and vote to make needed changes or "course corrections" in weight matters, all organizations have that capability. 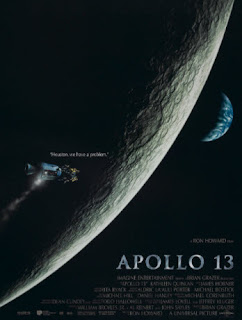 As depicted in the film "Apollo 13" and the book Lost Moon by Jim Lovell when the Lunar Module (LEM) went off-course they had to use the engine for a course correction.
Call that the move to not have coaches and contributors compete with players for the Hall of Fame either as modern or senior candidates.

However, the LEM was underweight because it lacked weight—they didn't land on the moon and did not collect moon rocks so the spacecraft was shallowing. So, they needed another burn to course correct and steepen the reentry.
We are calling for another correctional burn. Go back to two senior candidates a year or Gosselin's three a year. Either one—is the necessary "correctional burn". Fairness and equity call for it.
It would be wise and even heroic.
"Another burn? Copy that."—Apollo Flight Directo Christopher Craft.
Yes. Another burn, Mr. David Baker. Copy that?
Posted by John Turney at 1:21 PM