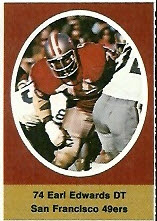 Earl Edwards dropped out of Wichita State in 1966 after being "dismissed" from the football team, along with two other players, for unspecified rules violations. The local paper reported the dismissals, then a short time later the Head Coach George Karras then told the same paper that there had been
"no dismissals".
The next story in the saga reported that there had been an olive branch offered by the coach allowing the three players to return under some unstated conditions. Edwards refused.
The previous year he was the Missouri Valley Sophomore Lineman of the Year so bigs things were expected for Edwards but prior to the dismissal he's suffered from a fairly severe ankle injury and was not have the kind of All-America season projected by the school.
Edwards had been a highly recruited athlete out of Tampa, Florida. He'd been offered a football scholarship from 26 schools and a basketball scholarship from ten. He was 6-6, 245 pounds at the time, and his play as a soph caught the eye of the Cowboys, Lions, Packers, and 49ers.
In Spring practice of 1966 the Packers defensive line coach, Dave Hanner, visited the campus and said, "Edwards is going to be a great one". When the 49ers visited and assessed the Shocker team they rated Edwards as good but teammate Bob Hoskins was better.
So after the controversy Edwards and went to Canada to play football. he was signed by Ottawa and went through their camp but they were not impressed with him, stating he stood up to high. They were very very impressed with his size and speed (reported as 5.2 in full gear) but waived him before the season.
Edmonton picked him up and made him an offensive tackle for the '67 season. He was quite successful for Edmonton as a defensive tackle, even garnering possible All-Star notice in 1968 but ultimately didn't gat named to the All-CFL team. 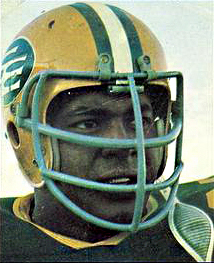 Then around 260 pounds, in 1969 the 49ers drafted him on the fifth round, knowing his physical quality and "good film" from Canada, to help them with their defensive line, which was aging in the middle. he'd become eligible for the draft in 1969 since his class was graduating, allowing him to be drafted that year. In the 16th round  (yes there were that many rounds back then) the 49ers took Bob Hoskins, his former teammate at Wichita State. They got both their guys from the Shockers.
Charlie Kreuger was 32 and Roland Lakes was 30. It was time to retool. The ends were younger and their left end was solid (Stan Hindman) and their right end (Bill Belk) was more of a "hustle-type" not really suited for end due to the lack of speed in his pass rush, but was a good run defender.
However, Edwards was still under contract so the 49ers had to give Edmonton compensation. That turned out to be "immediate and long-term player assistance that will ensure a supply of top talent to the Eskimoes for several years". What?
One Canadian football writer suspected much of that "assistance" was cash but that was never confirmed. He also speculated that since there were waiver wire procedures in both the NFL and CFL that essentially it would be Edmonton would "get the first crack" at the 49ers taxi squad.
Regardless, the deal was finalized and Edwards was a 49er. As a rookie he got to start, not at tackle., but at end, four games each in place of Hindman and Belk and got not notice. He even got three votes for NFL Defensive rookie in a year, not bad considering Joe Greene won the award and was terrific as a rookie and much better known, being the number one overall pick that year.
In addition to his starts at the defensive end, he caught a pass as a tight end and took camp snaps on the offensive line.
Edwards prepared for the 1970 season by lifting weights for the first time in his life. He said he was inspired by Curly Culp's performance in Super Bowl IV so he hit the weights and got his weight to 277 with no loss of quickness, but was aiming to get down to 265 pounds when the season started.
That year Tommy Hart, who was a linebacker in 1968-69, was converted to defensive end  (he'd hit the weights as well and was up to 250 pounds from the 220 he was as a rookie) and the Niners took Cedrick Hardman with their top pick. Hart earned the left end position and Belk was the right end with Hardman coming in on likely passing situations and spelled Belk as well until he became the starter the last month of the season. 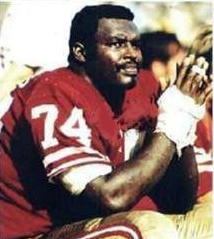 Inside Kreuger and Lakes were the starters but Edwards usually played on passing down with Lakes coming out. Edwards also spelled both, gaining experience and provide inside pressure. The 49ers defensive improved as did the team winning the NFL West.
In July 1971 Lakes was shipped to the Giants for a draft pick and Edwards was the starting tackle. According to Mike Giddings, who was on the 49ers staff at the time, "Earl solidified our line and was an excellent player in 1971 and 1972, and the year before as well, as a rusher. He helped is win the West those three years." 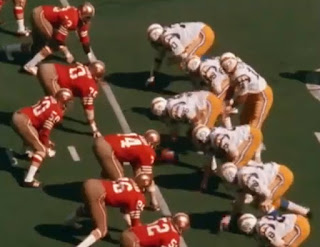 Giddings went on, "His PQs (physical qualities) were off the charts. He was tall and so fast and quick for a guy that size. His height and arm length were huge assets. Athletically he could do anything—he was an excellent basketball player, could jump a mile".  Giddings also scoffed at the reported 5.2 forty-time. "He was a 4.8 at least, after practice he'd challenge guys to races and beat a lot of the backs".
"Earl would get a couple of guys to play with him and he'd challenge myself, Paul Wiggin, and Jim Shofner—we had a three-man team, and they never beat us. Of course, we didn't have a ref so I hacked the hell out of Earl. Wiggin had long arms and had a hook shot, so that helped is and Shofer was a helluva a defender. Anyway, Earl could shoot, had an unblockable hook shot... just a great all-around athlete".
Here is a clip of Edwards with a slap and swim, then gets the double-team—
The marriage ended after 1972, though. To put it kindly he was one of those players that had all the skills but the 49er coaches grew tired of and felt it would be best to part ways. The 49ers shipped Edwards to Buffalo for Randy Jackson and a third-round pick in 1975.
Ironically, that opened up the right defensive tackle position for Hoskins who'd been rotation player and nickel rusher in 1972. Hoskins played well then next three years for the Niners, averaging 79 tackles, 6½ sacks and 5 stuffs a season.
Meanwhile, the Bills traded 1970 first-round pick, Al Cowlings, to the Oilers (for a second-rounder) and needed to replace him and Edwards was their man. He played the opposite end from Walt Patulski and for a couple of years, they were good.
Patulski gets dumped on a lot for being a number-one overall bust, and maybe so, he did lack the skills of a top overall pick but he was not a bad football player just, perhaps, one who was taken too high.
In 1973 Edwards had 9½ sacks and Patulski has seven. The Bills rushing defense allowed 2241 yards in 1972 and cut that to 1797 in 1973 and the yards per rush dropped from 4.2 to 3.9. What's more, is the team sack total jumped from 22 to 32. 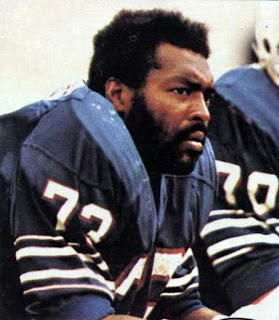 The O.J. Simpson-led offense scored enough to give the Bills a fighting chance in most games as the defense cut the points allowed 377 allowed to 230. and the Bills won nine games.
The defensive stats and points allowed were about the same in 1974 as they were in 1973 as was the record but that year the 9-5 record got them into the playoffs (pounded by the Steelers) but still, things seemed to be on the upswing in Buffalo. 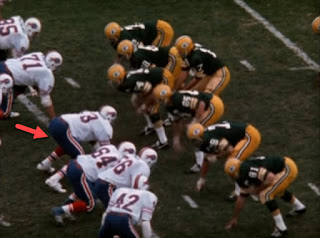 The defense was still a 4-3 with left end Patulski (LE), Mike Kadish (LT), Edwards (RT) all starting 14 games with Dave Costa (9 starts) and Bob Kampa (2 starts) playing right end. In the other three games the Bills opened with a 3-4 defense and in those situations Edwards was the right end and Kadish was the nose.
However it was not that simple, often Edwards and Costa would swap positions in the 4-3 front— 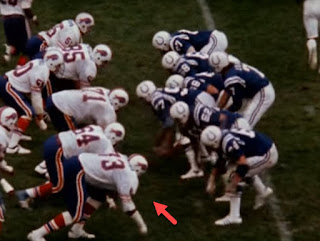 Edwards totaled 8.5 sacks and Patulski 5.5 and as was mentioned the defense, while not in the league with the Steelers, Rams, Cowboys, or Vikings, was pretty good and it could be said that Edwards was the best player in the front seven, whether as a DT, DE, 3-tech or wherever he lined up. 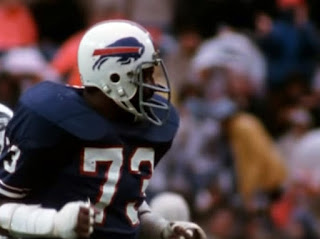 The Bills were optimistic in 1975 and began with a 5-2 record but then the defense fell apart for three games getting walloped by the Colts, Bengals, and Patriots. The offense bailed them out in the patriots game scoring 45 points, but the defense gave up 31, totally just over 100 for those three games while giving up an average of 500 yards in those three contests.
After opening the season with a 4-3 and having acquired Pat Toomay to replace Costa at right end, after the Bengals loss the second in that series) the Bills went with a 3-4 against the Patriots for the rest of the season. Toomay would then only play in passing situations.
The Bills had seen enough of most of that crew. Toomay was left unprotected in the expansion draft and was taken by the Buccaneers. Patulski was sent to St. Louis for a 2nd round pick and Edwards was traded to the Browns for a third- and sixth-round pick, about the same value they sent to the 49ers to grab Edwards in the first place.
Only Kadish remained as the Bills traded for Sherman White and drafted Ken Jones (later converted to offensive tackle) who took Patulski's spot and Ben Williams who took over for Jones in 1977 at left end.
Edwards was off to the Browns and was going to play next to Jerry Sherk. He didn't start but split time with Walter Johnson—the old pro who wasn't ready to lose his starting job, not that year anyway.
In August of 1977 the Browns released Johnson (who was picked up by the rival Bengals for depth) and the left defensive tackle position was Edwards'.  he did "fine" but admitted the move from the right side of the line to the left was an issue— 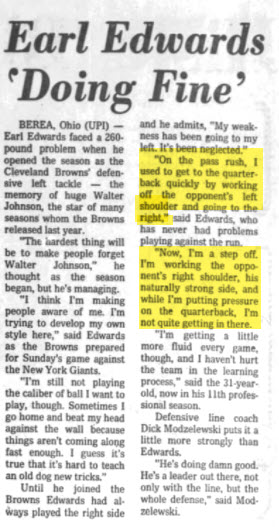 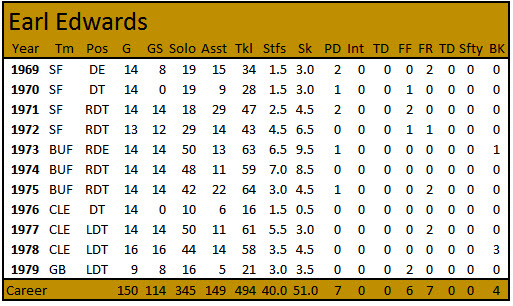