By John Turney
Longtime Charger right tackle Russ Washington has passed. He was 74. Washington played 200 games in the NFL, starting 196 for the San Deigo Chargers from 1968-82. No cause of death was announced.
"Big Ru" was the fourth overall pick in the 1968 NFL Draft and spent his first two seasons at defensive tackle (the right tackle was Hall of Famer Ron Mix and the left tackle was solid Terry Owens). Said his coach Sid Gillman upon Washington's signing, "He is such a great player. He will play defense but we are not sure it will be an end or tackle".
Often, rather than a 4-3 tackle he was at nose tackle since the Chargers alternated from 4-3 to 3-4 fronts, as many pro teams did, especially AFL teams but the Chargers along with the Chiefs likely did it the most. In that defensive interior role, he totaled 60 tackles as a rookie with a sack and 35 tackles and a sack in 1969.
Seeing a 6-6½, 295-pound man over a center was interesting. Look at the size difference between Washington (#85) over Hall of Famer center Jim Otto—
In 1970 he was moved to right tackle, and his athleticism (4.9 in the forty) was showcased. By 1973 he was gaining post-season honors making All-AFC teams and in 1974 he was Second-team All-Pro and made his first of five Pro Bowls. His ability to pull as a tackle was particularly noted early in his career as a tackle, he became a top pass blocker after he gained a few years of experience at the position.
He got more respect for the NFL players in those terms than the media since he was First-Team All-pro by the NEA (the 'players All-Pro team) in 1978 and was Second-team, as mention in 1974 and 1979. He made the Second-team on the AP poll in 1982—his final NFL season.
Additionally, he was voted Forrest Gregg Award as the NFL Offensive Lineman of the Year for 1977 by the Wisconsin Pro Football Writers (won by Yary in 1974, Dierdorf in 1975, Leon Gray in 1980, and Marvin Powell in 1982. As Jon Gruden might say, it's was a "prestigious-ass award".
In Washington's era, the right tackle was the premier spot, not the left tackle. The dominant ends in the 1960s and 1970s were the left-side guys going from Gino Marchetti and Willie Davis to Deacon Jones, Carl Eller, Claude Humphrey, Bubba Smith, Jack Youngblood, L.C. Greenwood would make the All-Pro teams with an occasional right end bubbling up. And the same was usually true for the tackles, the right-side guys were the better of the two usually—Forrest Gregg, Ron Yary, Dan Dierdorf, Rayfield Wright, George Kunz. Even Art Shell was a strong-side tackle since his quarterback was left-handed.
This made making All-Pro teams and Pro Bowls a very competitive proposal and Russ held his own. Ron Yary once told us that Washington was the most athletic of the guys in his era. jack Youngblood said the same, "I never got anything off that guy. He was bigger than all of the others and the quickest. And the others, Rayfield, Ron, and Dan were great, but Russ may have been the most talented and he went about 320."
One of his line coaches, Jim Hanifan said, "The number one thing about Russ is his great natural size and strength. He has great balance for a man his size."
In the major-media awards and polls, Washington was at least Second-team All-AFC/Pro Bowl-level or above in 1973-74, 1977-79, and 1982. However, when checking with scouting firm Proscout, Inc., in 1976 Washington was a top-5 tackle as well but didn't get any notice, so call it seven seasons of being on the "next level" as a player, above and beyond a starter. 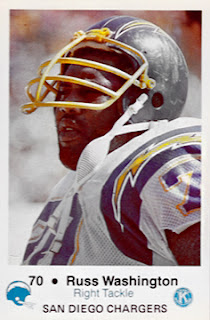 The Chargers released Washington in August of 1983 and even though he had worked hard to prepare for this 16th NFL season he took it philosophically, "I've always believed that you have to take what happens if there is nothing you can do about it. You can holler and scream but it's not going to change a thing".
He considered playing in the USFL and also possibly moving to the Pacific Islands and setting up a fishery. He loved the ocean, was a certified scuba diver, and sometimes spend offseasons on Truk Island in Micronesia—an island group in the Pacific about 500 miles southeast of Guam. His wife Inez was from Truk.
Washington attended the University of Missouri where he was the Big Eight Conference Defensive Player of the Year and a First-team All-American in 1967 and even played a little bit of fullback there. He was named All-Big Eight twice and played in four all-star games following his senior season.
Prior to that, he played at Missouri Southern in Joplin, Missouri. He was from Kansas City and graduated from Southeast High.
Washington was inducted into the San Diego Chargers Hall of Fame in 1995 and the Greater Kansas City Football Coaches Association Hall of Fame in 2016 and was voted to the Chargers San Diego 50th Anniversary Team and 40th Anniversary Team.
He, along with Doug Wilkerson (who recently passed), were the only two Chargers who lasted from the Sid Gillman era to the Don Coryell, all others were purged.
Noted as a gentle giant—soft-spoken and kind he was well-respected by his teammates and opponents. During his career, he showed some interest in acting and after his career, he was the owner of a car wash in National City in the San Deigo area.
R.I.P., Big Man
Posted by John Turney at 9:50 PM