In 1967 the Jets drafted a 6-4, 224-pound defensive tackle out of Texas and converted him to linebacker. That year he backed the starters and got most of his playing time on special teams while playing through a shoulder injury but late in the year he was moved back to the college position—defensive tackle. 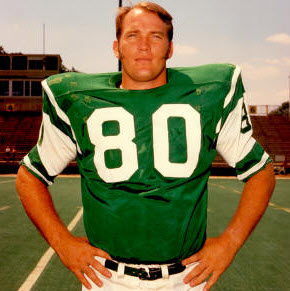 Individually Elliott made 81 tackles and sack the quarterback ten times. And, of course, the Jets famously won Super Bowl III against the 13-1 Baltimore Colts.

In 1969 his individual totals were essentially the same, 83 tackles and again ten sacks, and the defense was still stellar, allowing 1326 yards against the run (3.9 yards a carry) and sacking the quarterback 42 times and the Jets made the AFL playoffs, losing to the Chiefs who went on to win Super Bowl IV.

In 1970 All-AFL left end Gerry Philbin was hurt but Elliot had a great year, making All-Pro, making 75 tackles, 12½ sacks, 7.5 stuffs as the defense allowed 1283 yards, 3.1 yards a carry. Though without a healthy Philbin the sacks dropped to 35. 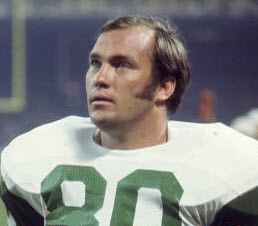 It really was a tremendous three-year run for the Jets front seven, led by the front four of Elliot, Philbin, Verlon Biggs, and a few different left defensive tackles allowing 1283 yards rushing per season for a 3.4 yards per carry average and an average of 39 sacks a season and within that framework Elliott averaged 80 tackles and 11 sacks and was Second-Team All-AFL in 1968, First-Team All-Pro in 1969 and Second-team-team All-NFL in 1970 and was an AFL All-Star/Pro Bowler all three years.

Pete Lammons, fellow Jet and Longhorn opined, “He was as good a defensive tackle as there was in the game, either the AFL or NFL. We all thought very highly of him.”

Another Jet, said in 1970, “I personally think he’s the best defensive tackle in football, by far, said Jim Hudson, “And that includes all of them”. (Of course the "testimonials" from a teammate or a coach of a player need to be looked at carefully, they can offer at lease some insight and are worth being included even if they might be a wee bit biased.)

However, Elliott did make a least one enemy—Gene Upshaw, who called Elliott a “cheap shot artist”. He also accused Elliott of greasing up the refs to watch for him and Art Shell to get extra holding calls. “That’s all Elliott”, Upshaw told the media, who added, “he’s always getting late hit calls on quarterbacks.”

Jets head coach Weeb Ewbank was effusive about Elliott, “One guy alone cannot handle him. The only way to keep him out of a play is to hold him double-team him or shoot him”.

His line coach, Buddy Ryan said, “He’s not the biggest or but he’s the quickest and the fastest, “John’s been clocked in 4.7 for forty yards”.  Ryan added. “We’ve seen him making tackles downfield on pass plays. Having him makes me look like a helluva coach. 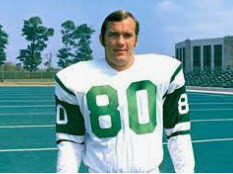 Ad for Elliott, he was more of the quiet Texas-type but when asked about his style said that he didn’t like to read plays, that if you did “(Y)ou lose a little. . .he’s moving and you’re still reading. There is only one way to play and that’s to charge full speed ahead when the ball is snapped. You don’t guess, you go. You have to have penetration. If you have penetration on a running play, you can mess it up and if it’s a pass maybe you can dump the quarterback or at least for him to rush his throw”.

When one wins that, he's reached the pinnacle— 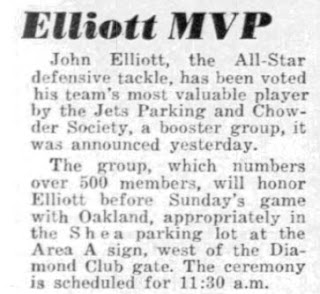 Then, as so always seemed to happen to great AFL players, the injury came. His came in the form of a knee injury four games into the 1971 season.

He came back in 1972 but was not the same. He was nagged with minor injuries that year and also in 1973. He averaged 60 tackles and 2 sacks in those two seasons, far below his usual production.

Rather than sign with an NFL team which he was free to do, he signed with the New York Stars on the World Football League.

He ended up making the All-WFL team, but the team folded after 13 games and Elliott told the New York Times five years later that the team/league still owed him $11,000.

Elliott attended Warren High School in Warren, Texas, and collegiately at the University of Texas where he was Second-team All-SWC as a junior even though he had a sore knee all season. He missed six games as a senior with an ankle injury.  All that after playing his sophomore season with an injured shoulder then cracking a leg in the Orange Bowl against Joe Namath and the Crimson Tide. The Jets took Elliott in the seventh round of the 1967 AFL-NFL Draft.

After his career, Elliott ran and won a sheriff’s post on an anti-corruption platform and later got into the oil industry in Texas.

In November 2010, John Elliott died from cancer in Houston, Texas. He was 66 at the time of his passing.

Regardless of the testimonials of his teammates, we don't think Elliott was quite as great as they said—the best defensive tackle in the business. We think that Lilly and Olsen were better and that Keating was also better, when healthy. But, still, Elliott, for those three seasons, 1968-70 was close, so give the man his due.

He had excellent quickness and some natural strength, but not to the level of Keating or the natural strength of Olsen or Lilly or the quickness of Page or a combination of both like Joe Greene who was still getting started in 1970. We'd call him a top-five to top-eight guy. Maybe a hair higher at his peak.

But like so many guys who started in the AFL, after he got hurt he lost some (a lot?) of his effectiveness so judging his career would yield one result, but judging his peak would yield a very high result. 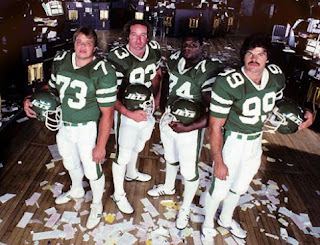 The 1968-70 Jets front four will never be confused for the early 1980s New York Sack Exchange with got to the quarterback far more often, but the late 1968-70 line was much, much better at stopping the run, and Elliott, Philbin, and Biggs could get to the passer with good regularity.

It's just another case of  "what if?" What if Namath didn't get hurt so often from 1970-73. What if Philbin and Elliott had stayed healthy? Could the offense and defense been able to keep the Jets in contention like they had been from 1968-69? We will never know, of course.