By John Turney
In 1952  the Green Bay Packers drafted an end named Billy Howton in the 2nd round (15th overall) of the NFL Draft. and he proceeded to have a tremendous rookie year, one of the best ever, even to this day. 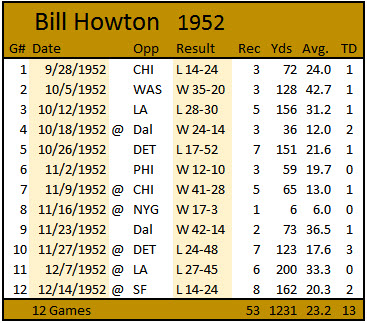 As per Pro Football Reference.com (PFR) Howton's 102.6 yards receiving per game is still third-all time among rookies (Min: 9 games)—
His 13 receiving touchdowns are second-best among rookies, behind Randy Moss's 17. However, Howton caught his in 12 games (1.08 per game) and Moss caught his 17 touchdowns in 16 games (1.06) per game—so who is really first?
Do we go by the season total of 17? That would mean Moss is first even though he played four more games. Or do we go by touchdown passes caught per game which favors Howton 1.08 to 1.06?
Good question. Now the NFL makes no allowances for per-game records, even though this year the season expands to 17 games. Pregame records have always made sense, but, hey, it's not our circus and they are not our elephants.
Here are the season totals for touchdown passes caught by rookies as per PFR—
Regardless, it's one of the top handful of rookie seasons ever by a receiver and it's good to remember such things every once in a while.
Posted by John Turney at 6:07 PM