These are questions that should be raised. Michael Strahan caught all sorts of hell (deservedly) when he got a 'gift' sack from Brett Favre. But the culprit was the scorekeeper who ruled that play "belly weak" in which Brett Favre kept the ball a passing play and not a running play. That meant Strahan got a sack and took his season total to 22.5.

That was egregious scorekeeping, it was a run play all along. Never mind the intentional laying down by Favre.

Last night was less egregious but the scorekeeping can fairly be questioned on T.J. Watt's third sack It may have been right but it was close enough to discuss.

1)     It was a zero-yarder where—to my eyes, Mayfield actually gained a foot or so, just not a whole yard, could have been ruled a 1-yard run.

2)     Mayfield went down on his own and the sack was 'given' to a nearby player, Watt however was NOT the impetus for Mayfield going down.

3)     Watt was not even the closest player—this was an official scorer ruling in favor of a favored player though after Mayfield was down Watt touched him, but by then that play was over, Mayfield had given himself up.

See the screenshot below - yeah that's clearly a solo sack for Watt . . . I guess the hand on the back does it after Minka literally jumps over Baker not to make contact after closing. 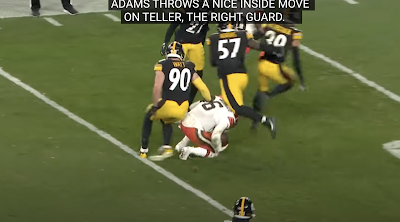 When the sacks are reviewed via tape this one will probably stand. But if Watt breaks Strahan's record this one will be part of it and the best-case scenario is that the scoring was generous to him. Not saying that this was as dubious as Strahan's in 2001 but this is cheesy if you ask me.
Everybody was so up in arms about Strahan and Favre, but anyone who gets 20+ in a season gets a freebie or two. This one is likely Watts'.
Posted by John Turney at 3:38 AM