Ray Lewis & Brian Urlacher and the Hall of Fame 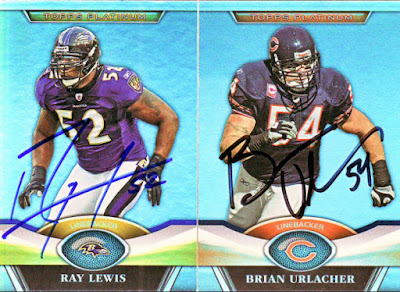 In two week the Hall of Fame selection committee will meet and vote on the Class of 2018. Both Ray Lewis and Brian Urlacher have a chance to have the extra cachet of being first-ballot Hall of Famers.

So, how do they stack up? Below is a chart showing the parts of their careers that can be measured. Clearly, some things cannot, they are the "intangibles" that are needed to be a Hall of Famer, things such as toughness, work ethic, leadership, etc.

But other things can be measured, games, All-Pro selections, Pro Bowls, interceptions, defensive touchdowns and things like that are among them.
Here is the chart—(Click to enlarge) 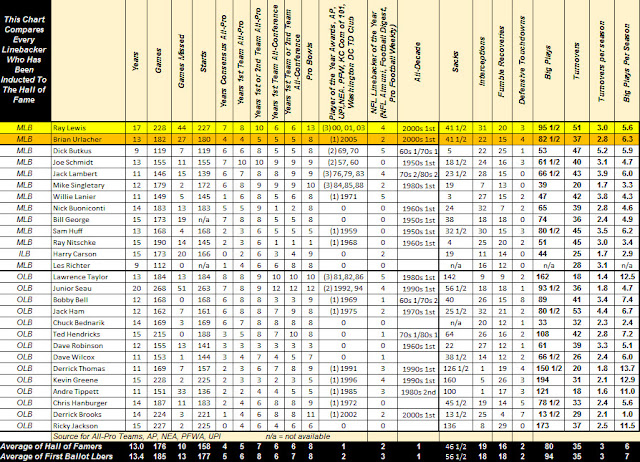 Urlacher, on the other hand, is almost exactly, by the numbers, the average for an NFL HOF linebacker. He comes up a little short in terms of All-Pros and other awards for a first-ballot contender. If he did get in this year it would be any kind of surprise and it would be that he's not very close to the previous numbers.

In our view, he'd be a better first-ballot selection than Jason Taylor, who got in last year on his first try. Only four previous defensive ends were first-ballot players—Reggie White, Bruce Smith, Gino Marchetti and Deacon Jones. Somehow Taylor's name does not have the gravitas of the other four. However, that ship has sailed.

Here are the statistics of both players as well. 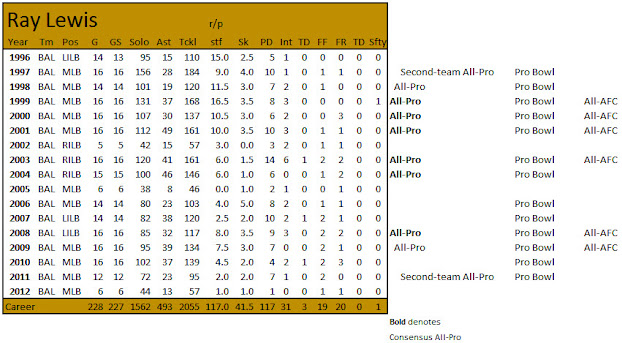 Again, statistics are just one part of a Hall of Fame candidates "resume" if you will. The honors and awards in the first chart are another part. The "intangibles" are yet another thing that is often considered. Certainly, the "hardware" or Super Bowl/Championship rings is another factor.

Another factor is the "what they said" statements about a player or "testimonials".  These testimonials can be from opponents, teammates, coaches, general managers, etc.

Of course, these can be problematic in terms of bias. If Player A is from  "Sante Fe" and the coach of Sante Fe said "this guy is a HOFer" perhaps it is taken at somewhat of a discount. In this case, the voters have to discern the value of the "expert witness".

In some ways, it is very similar to a court of law. Vermont law has jury instructions that read as follows:

Some witnesses testify as experts. This means that they have special knowledge, training, or experience that qualifies them to give an opinion on a certain matter. You should evaluate the opinion of an expert witness the same way you would consider any other testimony. Then, you should evaluate whether the opinion is based on the facts proved at trial and supported by their knowledge, training, or experience. 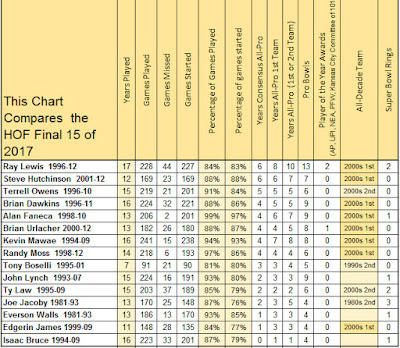 Lewis tops the list of players on the 2018 Final 15 list and his 13 Pro Bowls really stand out. But in terms of All-Pros Steve Hutchinson, Terrell Owens and Brian Dawkins and Alan Faneca are right there with Urlacher. However, Joe Jacoby and Everson Walls are in their last yer of eligibility and there is likely sentiment to keep them from going into the Senior pool, often called the "swamp" by Hall of Fame voters.