Is Jerry Rice Still the G.O.A.T? He Thinks So.

Yesterday, there was a dust-up on Twitter in which Jerry Rice proclaimed his place in history (for some reason) and get some pushback from fans of Randy Moss and Terrell Owens.

Much of the mocking Rice endured was the likely misspelling of "haters" as "hatters", which is fair, but silly since Twitter has no edit button and all of us make spelling errors, me more than most. 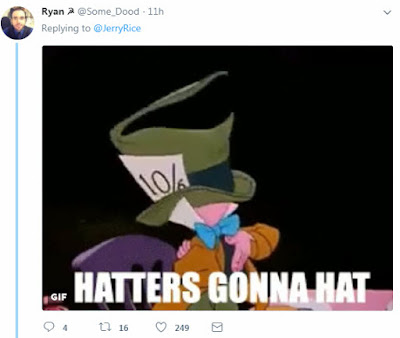 As of this posting Rice's Tweet has over 600 responses and over 1,000 retweets and a decent number were the aforementioned Moss fan pushback and the Rice fans rebutting those Tweets. I don't know why Rice got into the ordeal in the first place (don't punch down, Jerry) but it occurred and of course, I couldn't leave it alone so I added some perspective with a couple of Tweets.

It compares careers of Rice versus Owens and Moss in the categories of longevity, All-Pros, other honors, statistics, and championships. Only in yards per catch are Owens and Moss close.

The next was a more in-depth look at AP MVP votes and AP Offensive Player of the Year votes. 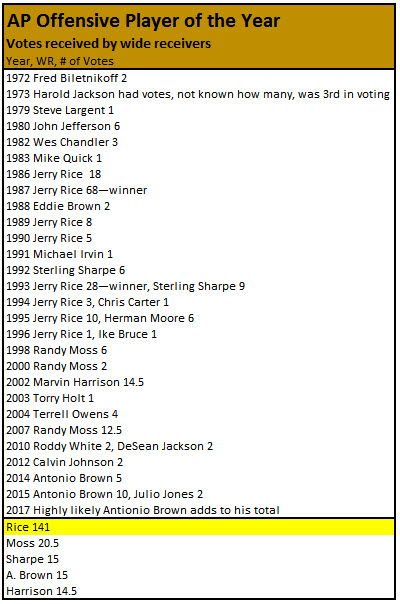 Antonio Brown, I suspect will surpass Moss in February when the AP Awards are announced but it really isn't close. Year-in and year-out Rice had support in this award, which is a hard thing to do.

The same is true of the AP MVP. In 1987 Rice was the runner-up in the MVP voting and he was the PFWA and NEA MVP, making him the consensus MVP of 1987, not John Elway.

Over the years there have been 127 or so votes cast for wide receivers, though some were called split ends and flankers in the 1950s and 1960s. And, with the two leagues in the 1960s the numbers skew somewhat but over 45% of all votes ever cast for a WR in the AP MVP poll went to Rice.

These things really just offer a glimpse of the impact of Rice's career. Everyone has their own "eye test" and we could see Moss was more physically talented than Rice in terms of height, speed, leaping ability. But that same eye test showed what Moss claimed was a fact, that is "I play when I want to play". Sports Illustrated's Michael Silver said recently, "Moss took seasons off" when doing a compare-and-contrast about Moss and Terrell Owens vis-à-vis the Hall of Fame.

Even Shannon Sharpe, who is highly critical of the Hall of Fame voting committee, said, when pressed, that of those two Owens was better, but that both should be in the Hall of Fame.

How the Hall of Fame vote goes in February will be interesting. There are lots of qualified players and only five slots. Someone will get left out this year but by our research over 90% of those who make the Final 15 eventually get it the Hall of Fame. So, the question becomes who has to wait.

Moss could go either way, he is not a lock. What prevents him from being a lock is the question of:  "Is he close enough to Jerry Rice's accomplishments to warrant first-ballot consideration?" That is a subjective question and each voter will decide for themselves.

In terms of numbers, it would seem not. About 3/4 the longevity, about 2/5 of the honors, about 3/5 of the statistics, and in terms of MVPs and Player of the Year awards and Super Bowl rings is zero percent.  Moss's highlight reel, though is comparable. And it comes to that, are wide receivers to be judged on their best plays or the entirety of their careers?

Though Rice's highlight reel is not lacking in any way, if it is played side-by-side to Moss, it may make you wonder which player you'd rather take. But when blocking, running (Rice had 10 rushing touchdowns in his career), route-running and consistent effort are all factored in most player personnel would say Rice wins, hands down.

My only concern in this matter is if both Owens (seems like his time) and Moss get in it will, like always, exclude a lineman or a defensive back who always seem to get screwed when the glory positions take up all the oxygen in the room. So, it makes sense to hope that Owens gets in this year, Moss next year. That way, both are in, neither is "snubbed" more than other great receivers like Marvin Harrison and Jerry Rice is still the standard of the post-1978 rule change receivers.

If a wide receiver wants to be a first-ballot guy do what Antonio Brown is doing—racking up statistics AND Player of the Year votes. I don't think voters would ever be so unreasonable as to say a player has to measure up to Rice in every way, that would be impossible. But making All-Pro more than four or five times is not impossible. Both Moss and Owens had the talent to do that but threw away too many seasons. Making more than six Pro Bowls is possible (Owens and Moss made six each).

Whatever the outcome of the Hall of Fame vote next month it is my view that this is a truism:  Jerry Rice is the G.O.A.T and it's really not even close enough for a discussion unless we are talking about different eras, historical perspective, and Don Hutson.
Posted by John Turney at 7:33 AM