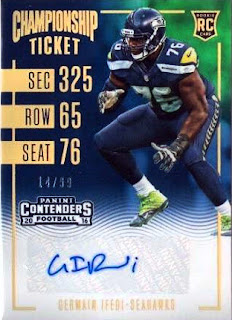 The Seahawks offensive line is broken, We know it, you know it and Pete Carrol knows it.  How do we know it, Russell Wilson is constantly being hit, constantly being sacked and constantly scrambling for his life.  All this and yet a review of Penalties this past year shows that all this happened despite the ‘Hawks starting right tackle Germain Ifedi leading the league in Penalties.  A review of Ifedi’s season shows that he was flagged 20 times, 16 of which were accepted directly costing his team 120 yards but costing his team 189 yards in total (penalty yards plus yards nullified by his Penalties).

How does this compare within the league? See below: 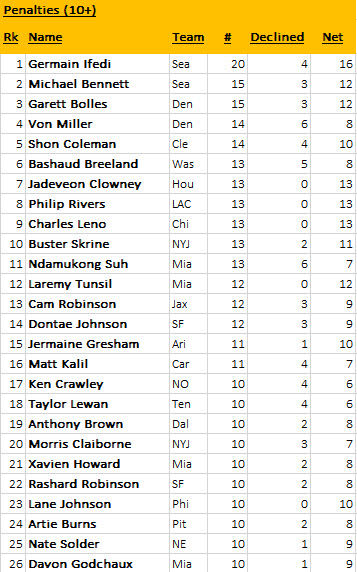 In fact, the second most flags in the league this past year were thrown against another Seahawk, Michael Bennett. Do you suppose leading the league in penalties could be the difference between the 9-7 Seahawks making the playoffs and missing them? Tied with Bennett with 15 total flags thrown is Garett Bolles the Broncos rookie left tackle from Utah and he is followed by another pass rusher on his same team, Von Miller. The highest QB on the list is Phillip Rivers who drew nine Delay of Game penalties – the Chargers really need to start getting those plays in more quickly! 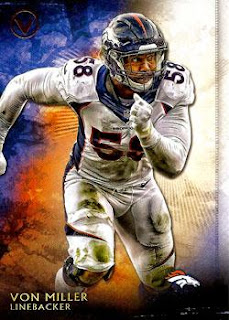 The list of declined penalties reads like a list of defenders who play on the edge. Declined penalties, by their nature, tend to over-index to defenders who commit a foul on a play where the offense is still able to arrive at a positive outcome. The top offensive players on the list Taylor Lewan and Matt Kalil are typical offenders on plays where the offense still manages a negative outcome – Lewan had a habit of committing penalties on Incomplete third-down passes, for example: 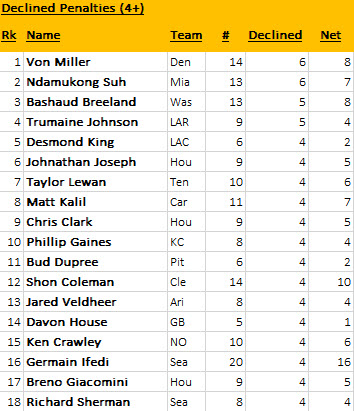 One look at yards penalized and you see Cornerbacks jump up the list, no real surprise here, you throw in Pass Interference penalties of 30, 34, 35 and 38 yards against Dre Kirkpatrick and the yards stack up quickly. P.J. Williams of the Saints racked up 48 Yards on a single PI Penalty against the Rams’ Sammy Watkins in Week 12.  Of course, Ifedi shows up as the top offensive player, hard not to when 16 times you cost your team yardage. 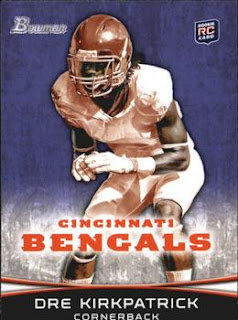 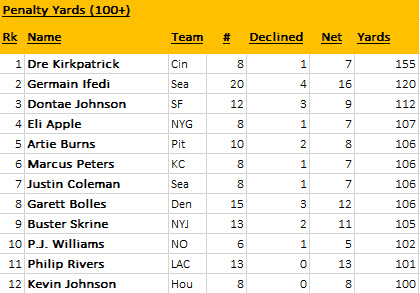 Another interesting angle is ‘Nullified Yardage’ how many gains were negated by Penalty?  Here again, chunk plays make a big difference. League Leader Donovan Smith managed to nullify 116 yards worth of plays, but wouldn’t have even been in the Top 10 were it not for a Week 7 holding Penalty which negated a 53-yard Jameis Winston completion to DeSean Jackson. DeSean should lobby for that one back, tallying his lowest yards-per-catch total of his career at just 13.4 this season, that single reception alone would have popped the number up by a yard. 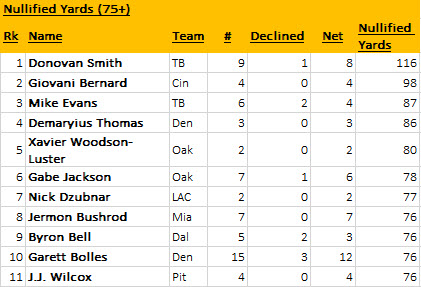 How meaningful were Penalties, the two charts below show how frequently Penalties lead directly to a first down or to a drive being ended.  The first down n table is heavily populated by cornerback’s committing pass interference and the stalled drive table is heavily populated by offensive players, typically offensive tackles and quarterbacks; our friend German Ifedi shows up again. 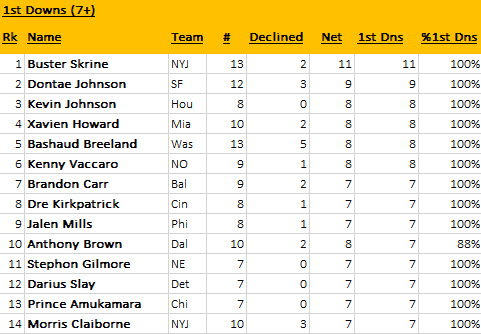 In total, the number of yards that a Penalty costs you is the sum of the penalized yardage and the yardage lost to the play that was negated. Your 2017 leader in Total Net Penalty Yards—German Ifedi, you are not surprised at this point are you?

Below the list of every player costing his team over 100 Yards in 2017 simply due to Penalties. This is our first opportunity to highlight a Patriot, well-coached teams simply don’t hurt themselves often.  But a Rob Gronkowski offensive pass interference penalty negated what would have otherwise been a 40-yard gain on a 2nd and 17 play against Atlanta, instead, the Pats were in a 2nd and 27 hole they could not dig themselves out of. 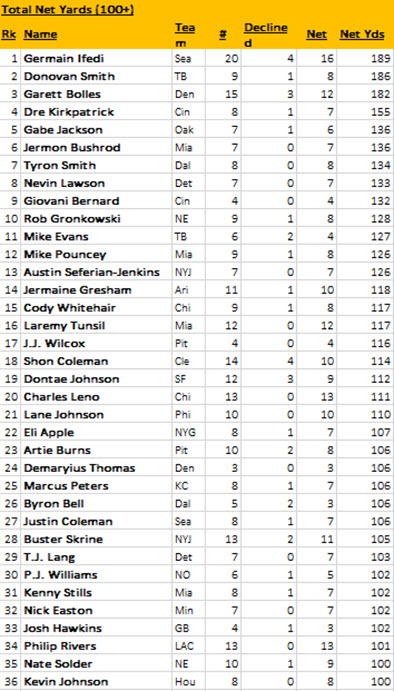 Lots of interesting nuggets and kernels in the 2017 Penalty stats, what’s your favorite?  As interesting as all this is, nobody can top the infamous Brandon Browner 2015 season, 24 flags thrown, 21 Penalties accepted for 207 yards and 19 first downs for Rob Ryan’s feeble Saint defense, two seasons later, Brandon is gone, Rob is gone, and the Saints are in the Playoffs.
Posted by Nick W at 12:31 PM