LOOKING BACK
By John Turney
Bryan Frye, a member of the Pro Football Researcher's Association (PFRA) posted a question on the PFRA forum about whether or not the 1950 Cleveland Browns wore silver pants with their "night" or brown jerseys. That season the NFL banned white jerseys and white helmets for night games to prevent deceptive ball handling which was apparently deemed too big an advantage for the offensive units. So, teams had to come up with "night uniforms".

The Browns 1950 highlight film showed the introduction of the new Browns uniform with George Young and Tony Adamle modeling the uniforms. In addition to the orange helmet and brown jersey, it appears the pants are a light grey or light silver. They are definitely a shade darker than the white pants that go with the white jersey— 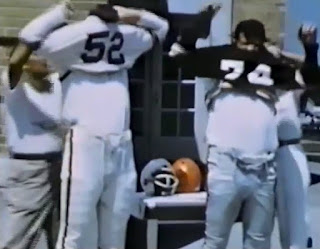 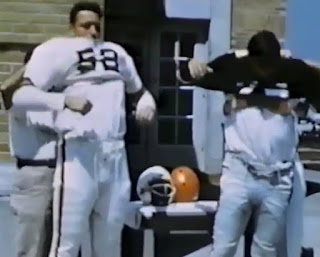 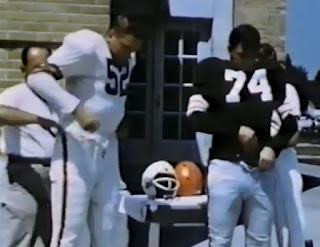 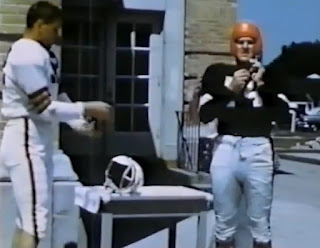 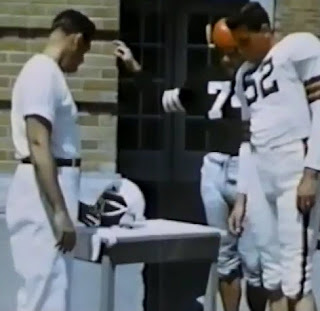 The shade is so light, however, that it is difficult to know with 100% accuracy if they are silver/grey and they certainly were not the bright metallic silver the Eagles, for example, wore.  Additionally, PFRA member B.D. Sullivan posted a clip from January 1950, that only then gave approval for silver or white pants for night games and that "white pants were barred" suggesting that the 1950 pants were silver. White pants, it seems, were not legal for night games in 1950.

So, the evidence suggests that the Browns did wear silver pants in night games in 1950. It is possible that the following year they may have gone back to white since they were approved for 1951 and presumably beyond.
Posted by John Turney at 7:13 PM