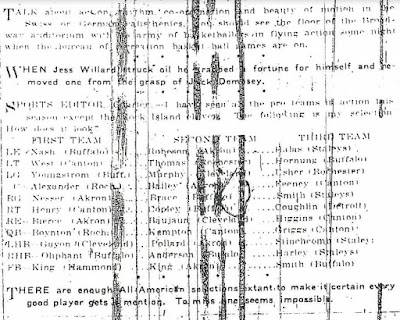 It’s inevitable.  Every year we hear reporters, pundits, fans—even players—debate over All-Pro selections, whether it’s someone being selected though seemingly undeserving, or someone being snubbed despite having outstanding accomplishments that season. Well, who are the ones making these selections?  Are the voters really qualified to make such evaluations?  Have they actually seen every one of the players they are selecting, or do they go on reputation?  And lately it seems every NFL beat reporter, radio host and blogger has their own “exclusive” All-Pro team.  Now, with the advent of social media, every fan with a Facebook or Twitter account is an expert!
It wasn’t always thus. For the longest time, the only All-Pro teams that mattered were those cobbled together by United Press International, the Associated Press, the Professional Football Writers Association and a handful of others. But if we go back to the very beginning, the early years when the National Football League went by another name (the American Professional Football Association), there were very few All-Pro teams. This is partly because pro football wasn’t taken all that seriously in its early days. Most writers covering the game didn’t travel with their respective teams for road games. In the league’s formative years, newspapers used wire services to report the outcomes of their team’s away games rather than laying out the expense of travel, food and lodging a reporter would incur. Which brings me to this point:  How is the beat writer covering, say, the Canton Bulldogs, more qualified to select an All-Pro team than an average fan when neither saw any of the Bulldogs’ road games.  A fan bearing a season’s pass likely saw just as many games as the reporter.  But the reporter is the one with the press pass which conferred upon him the unequivocal title of “expert.”

Maybe, but who’s to say?  Other reporters, that’s who.

Well, I’d like to break with tradition and offer up an All-Pro team from an average fan from Buffalo.  It is, admittedly, heavy with members of the Buffalo team, but let’s face it—the selector from the Rock Island Argus picked a team in 1920 despite the fact that the Rock Island team did not face the strong Buffalo All-Americans that year.  The result?  No Buffalo players were selected even though they finished 9-1-1.  George Halas, coach of the Chicago Bears, picked five members of his own team when putting together a syndicated All-Pro squad in 1922.  That’s just the way it went in those days.
While doing some research on another subject, I came across an All-Pro team published in the Buffalo Courier on December 2, 1921.  Though the team appeared under columnist Billy Kelly’s byline, it was actually submitted by an unidentified season-ticket holder. It’s clear this fan knew something about the sport, as evidenced by the fact that four of his selections are future Pro Football Hall-of-Famers, and several others are in the National Collegiate Football Hall of Fame. While it might never become an “official” All-Pro team, I like to think it at least offers a glimpse into the early days of the sport, and since there is only one other “recognized” All-Pro team from that season (ironically, the Courier’s chief rival, the Buffalo Evening News), it makes this find fairly significant.

No revisionism here … this man was an eyewitness to the game’s early greats. 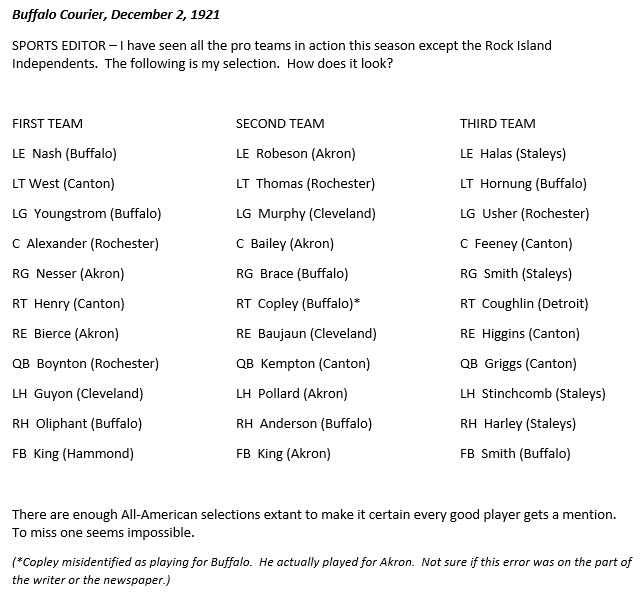