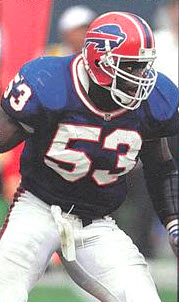 The early 1990s Buffalo Bills teams seemed like an All-Star team. They had Pro Bowls or All-AFC or All-Pro players at nearly every position from quarterback to running back to receiver to center, guard, tackle, defensive line, linebacker, cornerback to safety to special teams.

One player lost in the shuffle was Marvcus Patton who took over as an inside linebacker after Shane Conlan left to play middle linebacker for the Rams. Patton was drafted by the Bills in 1990 in the eighth round (almost a throw in pick from the Chiefs in the Art Still trade).

In 1991 and 1992 Patton started some games, filling in for nicked up Bills linebackers and performed well enough to be given a shot to win the starting job in 1993, which he did.

After two years as the strong inside linebacker, the Redskins signed Patton to a four-year, $6.8 million offer that included a $2 million signing bonus. 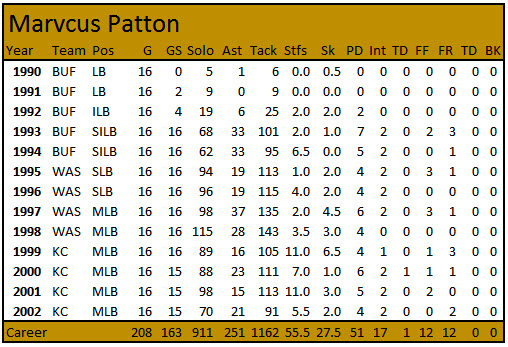 Patton played outside for the Redskins for two years before moving to the middle in 1997. In 1995 and 1996 we was a strong side linebacker in a 4-3 defense, but was not on the line of scrimmage as man SAM backers were in that era. He was off the line, almost stacked, like Junior Seau and Ken Norton among others, but those two were almost always on the weak side, unlike Patton. In the dime package Patton was the lone linebacker in the Redskins defense, rarely missing a snap. One UPI report stated that Patton only missed 17 snaps in his four years with the Redskins.

Patton felt he should be re-signed by the Redskins in 1999 and when he wasn't he vented his anger at the Redskin organization  '(They) didn't do me right for how long I played and the effort I brought to the label every practice, every game,' Patton told the Washington Times. 'That's both (coach) Norv Turner and (general manager) Charley Casserly. It's sad to see how they handled (this) considering the type of organization this has been. They made me an offer, but it was nowhere near what I thought I deserved.' 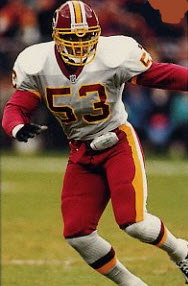 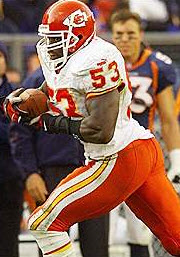 Throughout all of this he never was voted to a Pro Bowl nor did he garner any other post-season honors. He never missed a game, was in the field in nickel/dime situations, rarely missed a down and was a very productive tackler and could also rush/blitz and cover backs and tight ends well.

So, we honor him as one of the really good players that never got post-season honors, namely the Pro Bowl.