Bud Grant and the 1951 Philadelphia Eagles

LOOKING BACK
By T.J. Troup
Four games left in the 1950 season and the Eagles have won 32 of their last 40 games and are two time defending league champions. Philadelphia gets beat in all four remaining games and as a result there will be a coaching change. Bo McMillin has taken over for Greasy Neale and there will be some roster changes. Seven rookies make the team, but more importantly twelve men are in their final campaign with Philadelphia, and six players are in their only year with the team.

Let's take a look at the Eagle offense. Starting at left offensive end is rookie Bobby Walston. He demonstrates he will be a viable weapon as a receiver in the Eagle attack with 31 receptions and 8 touchdowns, and a willing blocker. Additionally he is rock solid as a kicker.
Left offensive tackle is veteran Vic Sears. He can drive block, and is adequate as a pass blocker. The last game of the year he starts at defensive left tackle. The guard position is handled by Al Wistert in his last year, and moving over from middle guard is Walter "Piggy" Barnes. They both play right & left guard during the year, but are very different in style. Wistert is athletic, pulls well, and can still cut off a pass rusher, while Barnes is a mauler who attacks defenders, and does an adequate job protecting Eagle passers. Stumpy John Magee fills in for both men at times. Rookie Ken Farragut is the opening day starter at center, but gives way to elder statesman Vic Lindskog.

The thirty-seven year warrior does a creditable job in his last year. Farragut with experience has a future in the league. Right offensive tackle is the domain of Frank "Bucko" Kilroy. He excels in all facets of offensive line play. None of the Philadelphia offensive lineman are selected for the Pro Bowl. Pete Pihos leads the team in receiving with 35 receptions at right end as he earns a Pro Bowl berth. Though he lacks speed, he has the knack for getting open is consistently reliable as he has a reception in the first eleven games of the year. He is a tenacious blocker, and will see time on defense as the starter at right corner in the league finale against the Browns. Steve Van Buren is in his final year, and due to pounding he has taken over the years he struggles breaking loose. 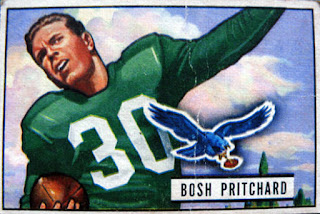 Since Steve is not the force he once was; the Eagles are backfield by committee. Ziegler, Parmer, Scott all have their moments both running and receiving. Bosh Pritchard struggles the first half of the year at halfback, and leaves the team. He is replaced by Al Pollard. The rookie runs hard and is a key part of the Philadelphia kicking game returning kickoffs and punts. Though Tommy Thompson did not shine in 1950, he is a difficult man to replace at the quarterback position. Adrian Burk starts all season, yet first Bill Mackrides, and then John Rauch (only year) fill in at times. None of these men consistently guide Philadelphia to the end zone. The Eagles win on the road at Chicago against the Cardinals to begin the year, and on a Saturday evening at home take on the upset-minded 49ers. San Francisco easily defeated the champion Browns at Kezar and are looking to be a factor in the National Conference.
During the game Frankie Albert gives way to Y.A. Tittle. Burk and Tittle shared the quarterback position for the inept Colts in '50 and now are trying to keep their teams undefeated. McMillin has the Eagle offense aligned in what he calls the "L" formation. This is a variation of the Giants "A" formation and causes problems for San Francisco linebackers in coverage in the Philadelphia victory. McMillin is in very poor health and is forced to leave the team.

Taking over is assistant Wayne Millner with able assistance from line coach Jim Trimble. Philadelphia is beaten handily on the road by Green Bay 37-24. Early in the game a fumbled exchange in the Packer backfield results in a fumble which is recovered by Bud Grant. The next play Pihos catches a touchdown pass, but this is the only time the Eagles are actually in the game. Packer passers shred the Philadelphia secondary for four touchdown passes. This had not happened since a loss to the Bears in October of 1947.

The early lead the next week against the contending Giants evaporates. Pritchard is tackled for a safety, and Emlen Tunnell returns the free kick for touchdown. Philadelphia is now 2-2 as Milner prepares for his former team the Redskins. Milner is just not getting the job done as Washington scalps the Eagles 27-23. The Eagles finally get a win for Milner at Forbes Field in Pittsburgh 34-13 and hope for a successful season is renewed. The Eagles score only 30 points the next three games and are out of the race at 3-6. December dawns and Philadelphia plays well while gaining 410 yards in beating Washington 35-21.

Two home games left in the season, and the Giants beat Philadelphia for the fourth consecutive time. There are only 16, 263 fans at Shibe Park to watch a Cleveland Browns team that has won 16 of their past 17 regular season games. The Cleveland defense plays superb on the frozen field, as the pass rush led by Len Ford overwhelms the Philadelphia pass pocket. 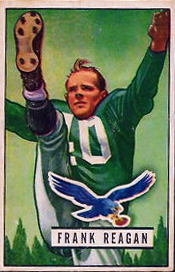 What about the Eagles defense? Glad you asked; so lets take an in-depth look at who played what position for the Eagles. Philadelphia finished in the top two in the league in the key defensive passer rating category from 1948 through 1950. The top-rated secondary is not consistent, and as such finishes seventh in the league.

Russ Craft is selected for the Pro Bowl at left corner. He is a force in run support, and still a viable pass defender. Bud Sutton starts the first eleven games of the year at right corner, but does not play well. Frank Reagan begins his last season at left safety, yet also plays some at right safety. He is still a willing tackler, and can make a play on the ball on pass defense.

Pencil-thin Pat McHugh plays in eight games during the year as the nominal starter at right safety in his last year. Beaten often, and not much of a factor in pursuit tells Eagle management they need help at this position. Dan Sandifer plays some on offense, returns kicks, and fills in at left safety when McHugh is out of the line-up. Once one of the premier pass defenders in the league; he now struggles to make any plays at all. Never recorded the recognition he deserved at linebacker—Joe Muha is retired and attempting to replace him is former Ram Gerry Cowhig. Though he hustles, Cowhig is no Muha, and as such he is moved from left to right linebacker during his only year with the Eagles. Rookie Ebert Van Buren plays some fullback, and linebacker and proves he has the toughness but not the athletic talent of his brother.
Chuck Bednarik earns his second consecutive Pro Bowl berth for his excellence at linebacker. Whether he is on the right or left; "Concrete Charley" shows he is going to be one of the best players in the league. His never say die attitude, coupled with experience make him the key man in Philadelphia's future. Last, yet certainly not least the defensive line. Right end is shared by nominal starter Jay MacDowell in his last campaign, and hustling Norm Willey. Though neither man excels, they both do a creditable job.

Mike Jarmoluk is a rock at the point of attack at right defensive tackle, sheds blocks well, and as such is the fourth Eagle selected for the Pro Bowl for '51. The starter at middle guard for the Eagles is former offensive lineman Mario Giannelli. He has the size, but just does not make many plays in his last year with the Eagles. The left defensive tackle is Walt Stickel. The veteran strongman handles himself well in his last year.

Johnny Green was a lean combative athlete at left defensive end, but after one game he is replaced by rookie Bud Grant. The athletic former Laker basketball player has an outstanding rookie season. Though he is not the pass rusher Green was, he acquits himself well in this area. Grant sheds blocks well, and is able in defending the sweep play to his side. He is excellent in pursuit from day one. When Cross of the Cardinals breaks loose opening day, it is Grant who with help from McHugh chases him down. During the November game against Cleveland when the ball is free for the taking on a punt Grant hustles down the field and recovers. This youngster has a very bright future on this team. 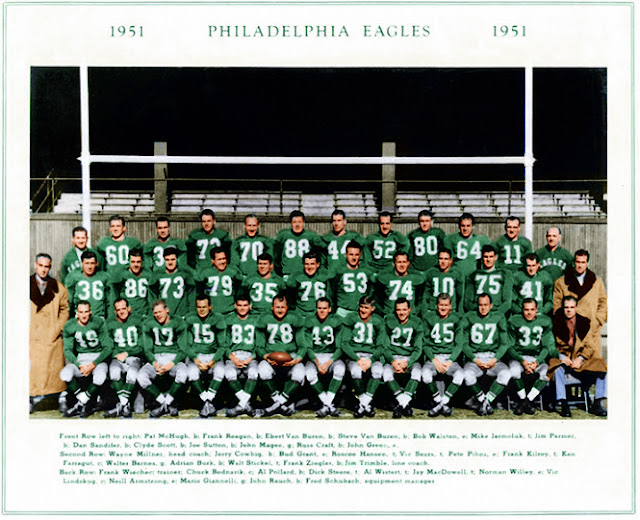 Eagle management decides that assistant Jim Trimble will be the man to lead Philadelphia in 1952, and one of the most interesting developments is the switch of Pihos to defensive end, and Grant to offensive end. Bud was deserving of being selected for the Pro Bowl, but Pihos is chosen instead. Grant led the team in 1952 with 56 receptions for 997 yards. He is one of only ten players who gained over 300 yards receiving in back to back games in the era of 1933 through 1959. We all know of his accomplishments with the Vikings and to a lesser extent his success in Canada.

Happy Birthday Bud, and have many more!
Posted by TJ Troup at 2:41 PM