The 100-yard receiver: The Chicago Bears

LOOKING BACK
By T.J. Troup
There has been an evolution in the play calling in the NFL since 1978. There are teams that still truly believe in the run game, yet a higher percentage of pass plays are called.

The recent draft was another example of "finding" the next great QB; yet even if he is a difference maker for a franchise, someone has to catch his passes. Having researched every game from 1933 through last season (14,358 games), the list of 100-yard receivers is of course long (over 8,300), and the names impressive.

Listing each 100-yard receiver chronologically by team sure can give insight into this category. There is one team that stands alone at the bottom since Tampa Bay has won only 33.8% of the time when they have a 100-yard receiver. There are a handful of teams that have been very successful when a player gains at least 100 yards receiving. 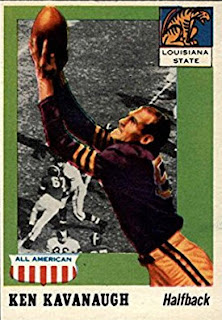 This essay though is about just one team: the Chicago Bears. Ken Kavanaugh was the first Bear receiver that maintained production for a long period of time, and the fleet #51 recorded nine 100 yard receiving games. Opening day 1954 and a Bear team that has won only 9 of their last 28 games are in Detroit to take on the defending league champion Lions.
Rookie Harlon Hill catches 4 passes for 140 yards in the loss. He is the ONLY rookie in league history to catch passes for 100 yards against the defending league champion. Hill will record 16 one hundred yard receiving games in his first 33 games! Leg injuries and personal demons limited his production his last five years with the Bears, yet he still holds the team record for 100 yard receiving games in a career with 19. For a moment let us ponder the time frame; during the last 60 years, no Chicago Bear receiver has matched his production (have seen the Bears play in person many times since the mid-'60's). How is that possible with rule changes that enable the receiver to have more freedom, and passers who are protected?

There have been excellent receivers for this team, but none that could sustain their production. All football fans can quickly rattle off the names of runners who led the offense from the mid-'50's to the present. Much has been written about the failures or inconsistencies of Chicago Bear "snap takers"—my term since this team has had very few quarterbacks who could actually throw accurately. Is it possible that one of the main reasons this team has struggled for so long at the quarterback position is there was no one who consistently got open, made the catch, and then gained the all-important yards? Looking for a title for my stories has sometimes been a challenge, and years ago when detailing Hill's career Paul Lionel Zimmerman came through for me by stating that Harlon Hill was the "Lance Alworth of his era". Chicago may never have a receiver the caliber of Bambi, or even Harlon Hill.