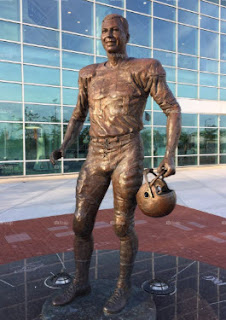 (Author’s Note: Green Bay Hall of Fame quarterback Bart Starr’s recent death has caused many pro football writers to publish stories about him.  Following is my attempt at doing the same thing, in my feeble effort to honor him).

I was a young sportswriter for the Coatesville (Pennsylvania) Daily Record newspaper back in 1991, when my editor came up to me one random day and asked me if I was interested in driving down to Philadelphia, to cover an award ceremony honoring Bart Starr. Was I interested?!? Was he kidding?!? Heck yeah…you bet I was interested! Bart Starr was NFL royalty.—a man who led the Green Bay Packers to five world championships during the decade of the 1960s was coming to my home state! I practically snared the press pass out of my editor’s grasp and ran to the parking lot.  I was going to meet the great Bart Starr!

I probably should have been ticketed for speeding several times as I ripped down the Schuylkill Expressway that afternoon, a route derided by most denizens of the Keystone State as the “Sure Kill Distressway.”  It did not take me long to arrive in Philadelphia, and thankfully, I did so without crashing into another vehicle or the guard rails.

The event in which I had a pass to was regarded as an informal event, as Starr was being lauded with the Ernie Davis award for sportsmanship. Ernie Davis was a superstar collegiate running back for Syracuse University, who never got a chance to play pro football due to his untimely death shortly after he was drafted to play in the NFL. I for one did not feel that any award that Mr. Starr was getting should be an occasion for an informal gathering, but that did not really bother me too much.

However, an even more head-scratching consideration for me to contemplate was where the event was taking place…inside one of the luxury suites of Philadelphia’s Veterans Stadium during a Philadelphia Phillies baseball game! No, I never figured out why one would honor one of the greatest pro quarterbacks in NFL history at a Major League Baseball game. But then again, I really did not think too much about that as I ran up the ramp to the stadium and rode up the elevator to the luxury suite level of the venue. I was going to meet Bart Starr!

There is an etiquette of sorts with sportswriters that should never be neglected. Rule number one is that you should never interfere with a reporter from a rival newspaper as he or she is interviewing the subject that you want to interview. So, to adhere to that rule, I stood about 20 feet away from Mr. Starr, as he was being interviewed by a reporter from the Philadelphia Inquirer newspaper. Finally, after about 15 minutes, the Inquirer’s reporter left to file his story, and I had a chance to meet and interview one of the greatest quarterbacks in NFL history.

I nervously walked up to him, extended my hand for a handshake, and somewhat trembling, uttered these words: “Hi Mr. Starr, my name is Joe Zagorski, and I write for the Coatesville Record (a small town newspaper that I am sure that Bart Starr had never heard of before).  I was wondering if I could take a few minutes of your time to interview you.”  His response – as I now know – was typical for such an incredibly kind man.  “Oh please, call me Bart” he said.  Maybe that was why this was an informal event.

Bart Starr was an informal man, but he above most men, had a right to be formal. He had led a great team to numerous victories and championships during his career, and yet here he was, as informal as anyone could be. To say that I was impressed was an understatement, and I had not even begun to start interviewing him yet!

I talked to him about his playing days, and I asked him some questions that I knew he had heard literally hundreds of times before. Despite that fact, he answered them as if my familiar questions were being asked for the first time. In fact, he treated me with the respect that he would have treated a sportswriter from the New York Times.

Unbeknown to me before I left our newsroom to attend this once in a lifetime event, Bart Starr’s handlers at Veterans Stadium had scheduled Mr. Starr to do a short, televised program with one of his former teammates, the great Hall of Fame cornerback, Herb Adderley. My jaw dropped. Herb Adderley was here too! I threw formalities and journalistic rules out of the window upon hearing this news. I adroitly asked one of the event organizers if I could attend the filming of the show, which would occur down in the press box level of the stadium. He told me that I could, and there I was, walking down the hall with Bart Starr and his handlers.  I felt like I was a member of his entourage! Thank God I wore a tie for this!

Once Herb Adderley saw Bart Starr enter the filming room, the two men made a straight line for each other and embraced. No words were needed.  Adderley grew up in Philadelphia, and he made his home there after his pro career ended in 1972. The two former champions sat down and discussed with each other just a fraction of their grand memories…and yes, their memories included recalling the great 1967 NFL Championship Game, known for posterity as The Ice Bowl.  I was standing just a few feet from the camera, and I was taking in all of this, believe me. I mean, this was almost Heaven for me…probably closer to Heaven than I had ever been!

After the filming was done, one of Bart Starr’s handlers asked me if I was interested in getting my photo taken with the two former Packers.  Was I interested?!? Was this guy kidding?!? You better believe I was interested! There I was, standing in between two pillars of pro football royalty, and getting my photo taken with them. I simply could not believe what was happening. It was as if I was 13 years old again, and I was meeting and talking to a couple of the heroes of my youth. You simply cannot beat that feeling, and that feeling still stays with me today, every time that I interview a pro football player that I watched on television as a youngster. You just get hit in the gut with nostalgia and a longing for the past…that may be the best way to describe that feeling.  In any event, I had met Bart Starr and Herb Adderley. It was almost as if I had finally arrived in the pro football writing world.

But unknown to me, the best was yet to come. After the filming was done, I figured that both men would go their separate ways, and I would too. But I still had my press pass, so I went back up to the suite level of the stadium, sat down, and watched the baseball game.  Five minutes later, can you guess who sat down next to me? Yup…it was Bart Starr and Herb Adderley! I had already finished interviewing Mr. Starr…er, Bart…and yet here he was, sitting down with me and Herb (he said that I should call him Herb), and talking to me as if I was no longer a reporter. He was talking to me as if I was a friend of his! And the three of us talked and talked and talked. We talked about NFL history. We talked about the state of the game in that current year (1991). Heck, we even talked about the baseball game that was going on at that moment. I just could not believe what I was experiencing. You better believe that I obtained both of their autographs.

Another hour went by, and Bart Starr’s handlers informed him that he had a flight to catch. Both Starr and Adderley embraced each other one last time, and I followed Bart Starr and his handlers out of the stadium.  As he exited through the turnstiles, a random ticket taker noticed Bart Starr and expressed his joy at meeting this great man, much as I had done just a couple of hours before. Bart treated him – this unknown stranger – in the same way that he treated me…as a friend. He chatted with him for several minutes before leaving for his car. I stood there in awe, watching him walk away, and still in wonderment at all that I had just experienced.

Rest in peace Bart. Your kind will never be seen again. And to anyone who reads this, good luck trying to find a kinder man than Bart Starr. I’m betting that you never will.  I know I won’t.

(Editor’s Note: Joe Zagorski has authored a book on a team that Bart Starr served on as a quarterback coach.  The Year the Packers Came Back: Green Bay’s 1972 Resurgence, will be published by McFarland and Company, Inc., later in 2019.)