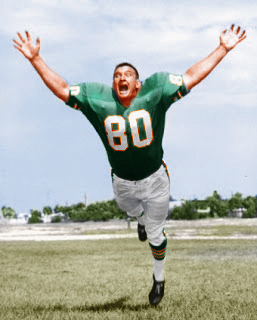 For those of you who enjoy seeing the breathtaking geography of this country; please take a moment and check out the images of Pilot Mountain, NC. Ed Cooke came from this area of the country and after an outstanding college career was drafted in the third round by the Chicago Bears in 1958.

The Bears have had some disastrous drafts in their history, and some exceptional ones also. Chuck Howley, Erich Barnes, Johnny Morris, and Cooke were part of the Bears draft. Ed Cooke does not finish his rookie season with Bears as he is sold to the Eagles on October 25th.

He soon becomes the starter at left defensive end for Philadelphia and has a solid rookie season. Cooke is released by the Eagles in October of '59 but finishes the 1959 campaign as a champion on the Baltimore Colts. He is again released, but there is a place in pro football for him—he signs with the American Football League entry in New York.

Many stories have been written about the trials and tribulations of this organization, yet this story is about Ed Cooke. He plays defensive end in 1960, but due to injuries, and an overall lack of talent at the linebacker position (except for Larry Grantham) Cooke is moved to left or strongside linebacker in 1961 and 1962.

The rangy dedicated Cooke has some strong moments including a two-interception game (46 yards in returns) in the 28-7 victory over the Dallas Texans on December 3rd, 1961. When he Titans finally beat the Chargers for the first time on October 28th, 1962 Ed contributes a 20 yard interception return. He scores his first touchdown on an 11-yard punt return (blocked punt) during the year against Houston.

Moved back to defensive end in '63 he is part of the rebuilding job of Weeb Ewbank for the newly named Jets. Though Cooke had played for Weeb in Baltimore he is sent to Denver in a nine-player trade before the 1964 season.

Ed is an immediate starter at left defensive end for Denver and has played strong football the first half of the year. My latest research project involves listing every opponent fumble recovery in NFL & AFL history from 1950 through 1969.

The AFL league manual after the 1968 season has a listing of the longest opponent fumble recoveries; and listed second is Cooke's 63-yard return against the Chiefs on November 1st, 1964.

So, let's check the play by play for the game. Mack Lee Hill has thundered around the Broncos right side for 19 yards and a first down on the Denver thirty-seven yard line. The ball has been given to Hill again; defensive tackle Charlie Janerette penetrates into the backfield and punches the ball loose from Hill.

A hustling Cooke comes from the backside and picks up the bounding ball and strides off towards the end zone for a touchdown. From film study sure looks like Cooke picked the ball up at the Kansas City forty-eight, but the Denver record book has the return listed as 46 yards.

There are times in doing research there are going to be discrepancies (issues?) and hopefully, I will be able to solve them to have the project be as complete and accurate as possible. Though Denver still struggles to win games Cooke gives maximum effort and records at least 4 sacks during both the 1964 and 1965 seasons.

Expansion in the AFL sends Ed to Miami, and he plays the best football of his career in 1966 and is rewarded with selection to the AFL All-Star game. He has his best pass rush season with at least 5 sacks and continues to play the run tough. Cooke returns for the '67 season with the Dolphins.