LOOKING BACK
By John Turney
Sometimes we refer to the old guard Hall of Fame voters as having ruled in "the Bad Old Days" because of reasons like the upcoming story.

The old school writers had agendas that were odd, unfair and even unsavory. A few years ago Sid Hartman said on radio that the night before the Hall of Fame vote he and a few select writers like "Billy" McDonough, Lenny Shapiro, John Steadman, and maybe a couple of others would meet secretly and "decide who was going into the Hall of Fame the next day".

We don't know it that's 100% true but we captured inklings of that in the 1990s when he began to follow the process closely.

Anyway, on to Namath.

As we know Namath had a big impact on pro football by taking his Jets team to the Super Bowl and beating an established NFL team. He was a passing maven and first, then injuries took his career path down, especially from 1975-77 when he didn't look very good, in fact, he looked bad.

He took chances, and threw a lot of picks, but he also threw passes (an out from one hash to the far sideline) that teams couldn't cover and no other quarterback could throw. That was part of his legacy, his skill set.

So for background, the following happens:  Namath retired after the 1977 season. After the 1978 season, Fran Tarkenton retires. And then, after the 1979 season, Roger Staubach retired.

Namath's case was presented, discussed, and was shot down by the NFL bloc of voters, the ones that represented NFL cities as opposed to the AFL voters, who covered AFL cities. Apparently, it was pretty heated (not uncommon then). Part of the criticisms were not just that Namath's stats looking mixed (with all the interceptions) or how injuries impacted his career, it was that his 4007 yards were "in the AFL" suggesting that even in 1967 the competition was not up to NFL levels.

Though some of the NFL voters were for Namath, not enough were to put him it so, Namath was not elected that year. he'd have to wait.

Then came 1984. That year, Fran Tarkenton was up for the Hall of Fame. When his case is presented by the Minnesota voter all the AFL voters crossed their arms in solidarity and sat silently during the discussion—they were making a point that they did not appreciate the Namath snub the previous year.

When the votes were tallied, according to reports, Namath was eight short, Tarkenton nine short. (Apparently, one of the old AFL voters did vote for Tarkenton—Remember the Colts, Steelers, and Browns were not AFL teams and the Seahawks were an expansion team so those four don't count so perhaps the Bengals voter wasn't a die-hard AFL guy?). 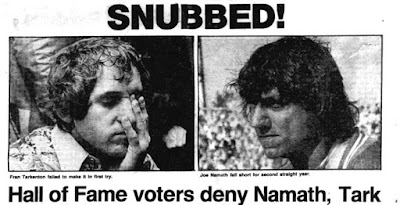 So, in 1985, Roger Staubach was voted in and so was Namath. Of course, some writers, not on the committee complained. 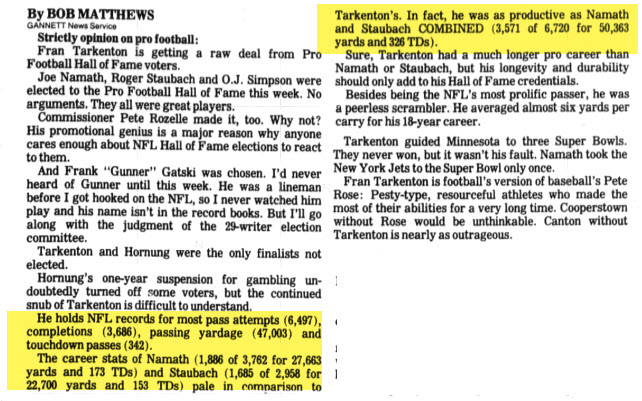 However, now that the AFL gods were satisfied with Broadway Joe in the Hall of Fame, in comes the vote for the Class of 1986. Sid Hartman, the Vikings writer, was confident Tarkenton would be voted in, and he was right. Tark sailed in now that the road was clear. 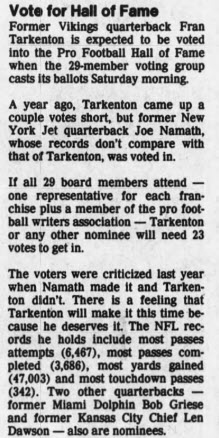 As poor as some Hall of Fame critics think the process is now, it is much better than the bad old days when these kinds of things occurred. And let's hope they don't occur again.