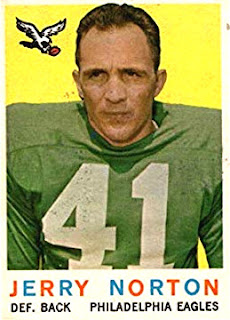 Today is Jerry Norton's 88th birthday; so in celebration let us take a look at the long twisting journey in this under-appreciated former versatile players' career. Norton joined a contending Philadelphia Eagles team in 1954 under coach Jim Trimble. One of Trimble's assistant coaches is Chuck Drulis, and coach Drulis will be a key component in Norton's career.

Opening day and Norton is the starting right safety as Philadelphia beats the four-time conference champion Browns. He has a strong rookie season highlighted by his 69-yard interception return for a touchdown against the Giants in a season-ending victory. Norton took the ball away from the opposition 8 times in his rookie campaign with 5 interceptions and 3 fumble recoveries. Since Philadelphia again finished second to Cleveland in '54 there was no reason to believe the Eagles would not be contenders again in 1955.

Norton begins the year on offense as the left halfback and contributes a 96-yard kick-off return for a touchdown against New York on opening night. Jerry also pounds out 81 yards rushing. He scores two more touchdowns on offense the first half of the year on 36-yard touchdown catch against Washington and a 23-yard dash up the middle on a draw play against the Cardinals. The second half of the year Norton is back on defense for an Eagle team that just does not throw the ball as well as the season before on offense.

Hugh Devore becomes the head coach of the Eagles in '56 and Norton cannot contribute as he has the past two years as his jaw is broken against the Cardinals on November 4th, and as such misses half the season. For three years now Philadelphia with Jerry a valued contributor plays strong pass defense, but the Eagles have finished 11th in rushing for three straight years averaging just 108 yards a game. Successful teams in this era have a balanced offense, with strong ground attacks—except in Philadelphia. Norton earns his first Pro Bowl berth at the close of the '57 campaign for his sterling play as the full-time left safety.

Since Adrian Burk is retired; Jerry takes over the punting duties and finishes 7th in the league in this category. The hustling instinctive Norton is always around the ball as he intercepts four times(including a 99-yard score against he Giants), and leads the league in opponent fumble recoveries with 5 (including two against Pittsburgh in one of the hardest hitting games of the year). Jerry is one of the stars of the Pro Bowl as he consistently boomed the ball on his punts.

Buck Shaw returns to the coaching wars in 1958 and the trade for Norm Van Brocklin means Norton will no longer punt. Though Jerry again plays well enough to return to Los Angeles and the Pro Bowl, the Eagles plummet to last place. During the '58 campaign, new assistant coach Bob Bronzan has convinced Shaw that a form of zone defense should be employed in Philadelphia. Norton has always been reliable in man coverage, and though the Eagles revert back to man coverage as the seasons progresses; zone coverage does not fit well with Norton's personality.

Don Schiffer in his Pro Football Handbook states that Norton is a "top pass defender and alert defensive back." His evaluation is listed in the Philadelphia chapter, and before the '59 season begins Norton is traded to the Cardinals for Bob Konovsky and Jerry Wilson. To quote my boy Buddy Parker; "you don't trade a layer cake for a couple of donuts".

Norton is joining a Cardinal team that tied the Eagles for last place in 1958. Coach Pop Ivy envisions his double-wing offense as cutting edge and most of what is written about the Cardinals is about Ivy and his offense. The Cardinals in their last year in Chicago in 1959 still don't win very much, yet their defense under Wally Lemm is very much improved. The left side of the secondary should have been the best in the league with Night Train Lane and Norton, but Lane just does not have one of his better years in '59. Norton again an Eastern Conference selection for the Pro Bowl and is named All-Pro by the Sporting News. Rare that a player is traded and continues to be chosen for this showcase all-star game, but rare accurately describes Jerry Norton.

He becomes the Cardinal punter, and on November 15th against his old club, he punts five times for 264 yards (52.8 average), which at that time is second only to Dave Mann. What kind of team is St. Louis going to inherit as the Cardinals move south? Pop Ivy still believes in his offense, though they turn the ball over at an alarming rate. Don Schiffer states that Norton is a "steady defensive halfback and punter who has always been alert on pass defense, and is a dead aim tackler." 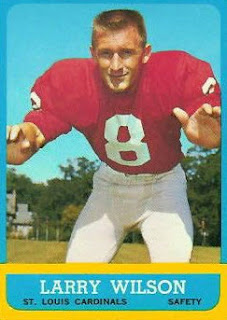 Rookie Larry Wilson joins Norton at the safety position, while middle linebacker Dale Meinert has become a force at middle linebacker. The defensive line led by Frank Fuller and Luke Owens stone wall the run, and as such the Cardinals lead the NFL in total defense in 1960 by allowing just over 3,000 yards in twelve games.

Norton watched from the sideline in Philadelphia as the Eagle offense struggled running the ball with any consistency, not so in St. Louis as the Cardinal ground attack with an improving offensive line and the thunderous John David Crow lead the league. 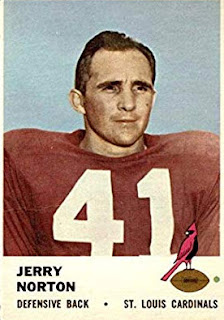 St. Louis finished 1960 with an impressive win over Pittsburgh. So did Jerry Norton contribute in 1960? Boy oh boy, and how! Norton leads the league in punting average at 45.6, and ties for the interception title with Dave Baker with 10.

November 6th in St. Louis Norton pilfers two Redskin passes in the 44-7 demolition of Washington. The rematch in our nation's Capital on November 20th is a record-tying performance as Norton has he has done so many times ranges all over the field snaring errant Redskin passes—FOUR to be exact in the 26-14 win. Not since the days of Sammy Baugh have we had a player who could lead the league in punting and intercept four times in a game. Jerry Norton is consensus First-team All-Pro.

Of course, he returns to the Pro Bowl as we enter 1961, but much more important is the predictions for the Cardinals for '61. Many predict the Cardinals can compete with the champion Eagles, the Giants, and the Browns for the Eastern crown.

Don Schiffer states " first among all 1960 punters, and all-pro selection for his clever and consistent performance as a defensive back." Yankee Stadium and Pop Ivy has signed Sam Etcheverry to play quarterback for the opening day clash against the Giants. The staunch Cardinal defense does not disappoint as they score on a fumble recovery, and ahead 14-10 Norton latches onto a Conerly pass and sets up the final St. Louis touchdown in the victory.

The Cardinals win only four of their next eleven games to fall from contention as the offense is woefully inconsistent. Norton continues to play strong football, and the highlight of the year is in Forbes Field in Pittsburgh. Bobby Layne throws towards the sideline and Buddy Dial as left corner Billy Stacy has his back to the ball in man coverage. The pigskin ricochet's off of Stacy's back into the sure hands of a hustling Norton. Jerry dashes down the sideline for 47 yards and a score and the early lead.

Fourth quarter, and Dick Hoak on a sweep left pulls up to throw the half-back option pass. The stocky halfback is hit by Ted Bates as he passes and the wobbly ball is under thrown and there he is again-----Norton intercepts and weaves his way down the sideline 37 yards(breaking Hoak's tackle on the twenty) to score and tie the game up at 27.

Norton has again intercepted 4 times in a game; the ONLY player in pro football history to accomplish this feat twice. But there's more? He also recovers a fumble, so he sets a standard that has never been duplicated. Jerry Norton recorded five takeaways in a game! Norton recorded 53 takeaways in his career; with 13 against both Pittsburgh and Washington.

Ivy resigns with two games left (Cardinals win last two games) as St. Louis finishes 7-7. Chuck Drulis worked with defensive co-ordinator Ray Willsey,  and on the practice field Norton would fool around with the Drulis concoction of a safety "red dog" or blitz. Though Larry Wilson had success with this maneuver, Norton also would knife into the offensive backfield on occasion.

For the fifth consecutive year he is selected for the Pro Bowl, and ties for second in the all-pro vote at safety, and considering how many quality safeties are in the league in 1961 that is saying a lot. Norton has been verbal in telling the Cardinals he will retire, but he does not as he is traded to Dallas in his home state of Texas in a three-team trade. 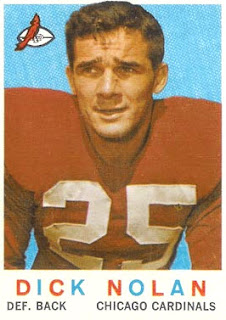 He will be coached in the secondary by Dick Nolan. Nolan wore jersey #25 for the Cardinals in 1958, and when he is traded back to New York, and Norton joins the Cardinals he wore #25. The #25's are together in Dallas trying to solidify the Landry defense.

Nolan becomes player-coach, and many games during the year Nolan is at left safety, and Norton is at right safety. Jerry intercepts twice early in the year, but time waits for no one, and he just is not a speedy as he once was.

Many times on film he is chasing opponents into the end zone. He is not alone as the porous Cowboy defense is one of the worst in the league. Norton's final moment in the sun is against his former team St. Louis when he takes a short field goal attempt by Jim Bakken on the six-yard line, and weave his way 94 yards for a score.

Not near enough though as Dallas is again pounded by the tune of 52-20. Vince Lombardi and his two time defending champion Packers need depth at the safety position, and St. Vince wants another punter. Jerry Norton will end his career punting for the Packers for the '63 & '64 campaigns and then retires.

The Norton saga ends with the following statement; no player in NFL history can claim these accomplishments; oh, the criteria you ask?
1) Must average better than 45 yards per punt over a three year time period.
2) Record a minimum of 50 takeaways in a career.
3) At some point in his career, he must lead the league in interceptions and fumble recoveries.
4) Score a touchdown at least five different ways.
5) Average a minimum of 7 yards a carry rushing (Norton gained 200 yards on 10 different forays on fake punts).
6) Selected for the Pro Bowl consecutive years on two different teams.

Happy Birthday Mr. Norton!
Posted by TJ Troup at 7:49 AM