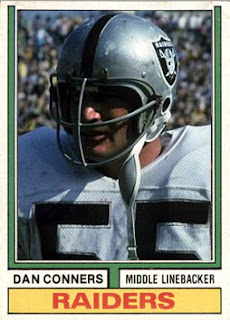 The Miami Hurricanes have been a NFL player factory for the past thirty or so years. But they had some fine players go through the program before that. Among them were Dennis Harrah, Ted Hendricks and in 1963 Dan Conners (who was called 'the next Sam Huff') was the showcase of the school.

He was drafted by the Oakland Raiders in the second round (15th overall) of the 1964 AFL Draft and by the Chicago Bears in the fifth round (70th overall) of the NFL Draft. He signed with the Raiders (who offered more money than the Bears) and played for eleven seasons.

In high school (St. Mary's, in central Pennsylvania) Conners was a three-sport letterman (football, baseball, and wrestling) and was good enough on the gridiron to be named High School All-American by one organization.

The 215-pound Conners punt on weight and played defensive tackle for the Hurricanes which likely drew the Sam Huff comparisons. He upped his weight each year and played linebacker later in his career and was noted for making highlight-type plays.


Said Coach TJ Troup, "Dan Conners was an adequate between the tackles linebacker who produced numerous big plays, many of them in the takeaway department for scores, or big yardage."

The Raiders, who went 105-38-11 during Conners' career, went to Super Bowl II, losing to the Packers. Conners totaled twelve sacks in his first six seasons (none after).  From 1965 through 1974 he recovered 19 fumbles for 112 yards, and two scores while intercepting 15 passes for 232 yards and three touchdowns. He has the most takeaway return yards of any middle linebacker in AFL/AFC history for this 10 year period, and probably the most takeaways with 34.

Here are his career stats taken from gamebooks (except tackles in 1968 and 1971, which are coaches film review totals). 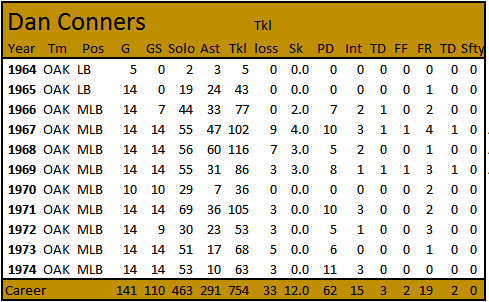 God speed to a darned good Mike 'backer.
Posted by John Turney at 7:49 AM