AFL Defensive Players of the Week – 1960 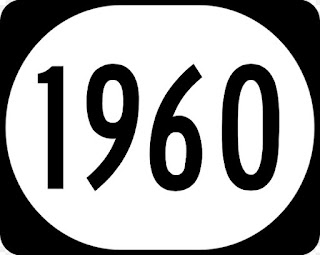 The first week of the American Football League’s regular season could be described as rough at best.  About the only thing more ragtag than the play on the field was the record keeping!  The gamebooks throughout the AFL’s first season were inconsistent, incomplete, frequently inaccurate, and sometimes downright comical. The documentation for that first week of AFL games, however, was especially bad, as stat keepers went by their own rules and nomenclature.


Nevertheless, with incomplete game films and unreliable newspaper accounts, the gamebooks are the best tool we historians have for recreating what actually happened on the field in those early AFL games. Unfortunately, many of the early statisticians did not list the names of the players making the tackles, or blocking kicks, recovering fumbles, or committing infractions.
It all makes for an interesting—if sometimes frustrating—research project.  Following the lead of my good friend and colleague Terence Jon Troup, I have endeavored to pore over the gamebooks available, along with any film and newspaper accounts that could be had, and come up with the American Football League Defensive Players of the Week for each season of the league’s existence.  This first season has been a challenge, but I believe I have been able to identify the best defensive player from each regular season week of the 1960 AFL season (15 total weeks). 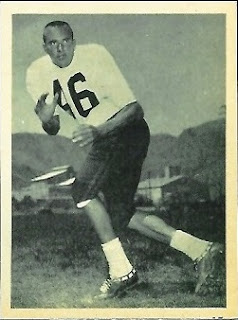 Denver’s Austin “Goose” Gonsoulin was the outstanding defensive player in the American Football League’s inaugural week, making two timely interceptions in the Broncos opening-day win over the Patriots in Boston.  Gonsoulin’s first pick ended a Boston scoring threat at the end of the second quarter as quarterback Butch Songin was driving the Patriots toward the would-be go-ahead touchdown.  Goose’s second interception came midway through the fourth quarter, blunting a Boston drive at the Denver two-yard line.  The Broncos held on to win the first game in AFL history by a 13-10 score. 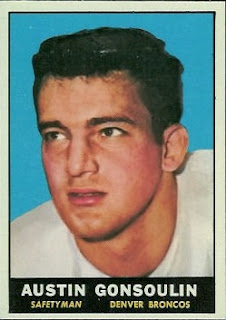 Goose Gonsoulin outdid himself in the Broncos’ 27-21 victory over the Bills at War Memorial Stadium in Buffalo.  The Baylor alum picked off four Buffalo passes, returning them for a total of 49 yards.  His final interception came in the final minute as the Bills were marching toward a would-be go-ahead score.  Goose also recovered a blocked Buffalo field goal attempt.  He was clearly the league's top defensive player for the second straight week


With the victory, the Broncos remained one of only two AFL teams left undefeated (the other being Houston). 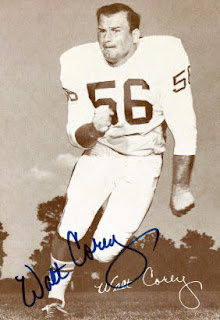 This week’s Defensive Player of the Week was Walt Corey, linebacker for the Dallas Texans.  The former Miami Hurricane was outstanding in leading the Texans to a shutout victory over the visiting Los Angeles Chargers.  Corey had two big interceptions in the contest, one to kill the Chargers opening drive, and the second with the Chargers on the march in the game’s closing minute.  That interception secured the shutout, and the win improved the Texans to 2-1 on the season and moved them into a tie with Denver for first place in the West.  Final score:  Texans 17, Chargers 0. 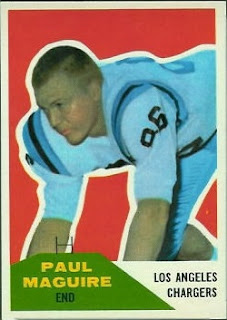 Chargers Linebacker Paul Maguire intercepted two passes to lead the Bolts to a 24-10 drubbing of the Buffalo Bills at War Memorial Stadium.  Both of Maguire’s interceptions led directly to touchdowns, those 14 points representing the Chargers’ margin of victory.

Week 5 – October 9, 1960
Dave Webster, Oakland’s outstanding rookie cornerback, was a one-man wrecking crew in the Raiders’ narrow 20-19 win over the Texans at Dallas’ Cotton Bowl.  Webster, a six-foot, four-inch, 220- pounder out of Prairie View, opened the scoring by intercepting a Tom Flores throw and returning it 80 yards for the touchdown.  In the third quarter, Webster broke through the line to block a Dallas PAT attempt that would have knotted the score at 14 apiece.  That single point stuck as the margin of victory.  Webster was credited with nine tackles in the game and also forced a fumble in the fourth quarter. 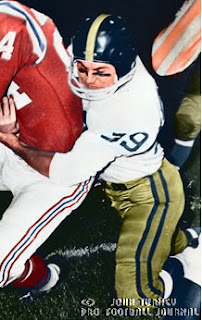 Titans safetyman Fred Julian earned DPW honors with a stellar performance against the Bills at War Memorial Stadium. The University of Michigan product pilfered two Johnny Green passes to pace the Titans’ to a close 17-13 victory.


Had things gone a bit differently, Buffalo’s outstanding free safety Billy Atkins might have taken the award with his three swiped aerials in this game. But despite the valiant effort, the nod goes to the winning side of the ball. 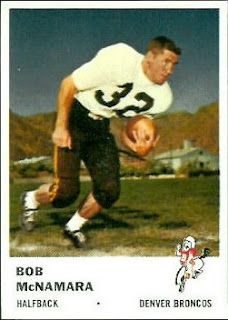 Denver’s multitalented defensive back Bob McNamara, who also played flanker on offense and starred on special teams for the Broncos was tapped as Week 7’s outstanding defenseman for picking off two Butch Songin passes in the Broncos’ 31-24 win over Boston at Denver’s Bear Stadium.  McNamara was literally all over the field in this game, for not only did swipe two passes (for 44 yards), he also returned two kickoffs (34 yards), returned two punts (19), caught one pass (9 yards), and had one carry (-6 yards).


The win allowed the Broncos to remain in sole possession of first place in the West, which would be the last time they would be atop of the division for the rest of the season. 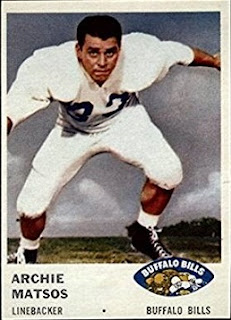 In a battle between the AFL’s #1 defense (Buffalo) and #1 offense (Houston), it was the defense that prevailed as the Bills picked off four George Blanda passes to eke out a 25-24 win at War Memorial Stadium.  Linebacker Archie Matsos stood out for the Bills, picking off two of Blanda’s errant aerials and chipping in with a 25-yard punt return to set up a Buffalo touchdown. 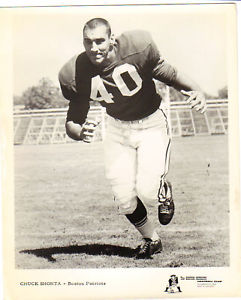 This week’s Defensive Player of the Week was Chuck Shonta, defensive back for the Boston Patriots.  The East Michigan alum was outstanding in the Pats 34-28 triumph over the Raiders at Boston’s Nickerson Field.  Shonta had at least two passes defensed (we say at least two since much of the text from the gamebook is illegible) in the first quarter to keep the Raiders off the scoreboard, then made a game-saving interception in the dying moments to preserve the win.  The Raiders, trailing by six late in the fourth, were driving toward the possible game-winning touchdown when Chuck nabbed Babe Parilli’s pass at the Boston 37 and returned it deep into Raiders territory.  It was all over at that point.

Week 10 – November 13, 1960
Linebacker Riley Morris led a devastating charge against Buffalo’s quarterbacks for the Raiders at Kezar Stadium.  Morris, out of Florida A&M, registered three of Oakland’s seven sacks and was responsible for 22 of the Bills’ total of 47 yards in losses.


The 20-7 victory kept the Raiders’ playoffs hopes on life support for at least one more week. 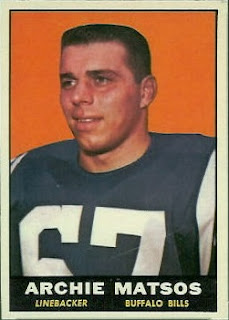 Archie Matsos wins his second DPW award with his fourth multiple-interception game of the 1960 season.  Big City Arch returned his second pick 20 yards for a touchdown that open the floodgates to a Bills 32-3 blowout win over the Chargers at Los Angeles’ Memorial Coliseum.  Matsos also recorded a key sack in the game.  The Matsos-led Buffalo defense harassed Chargers quarterback Jack Kemp all afternoon, resulting in five interceptions. 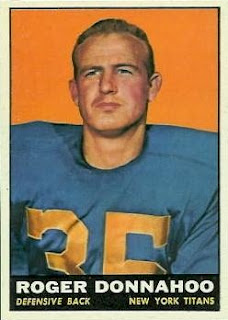 Roger Donnahoo of the Titans returned a Dallas fumble 57 yards for a touchdown to set the pace for New York’s 41-35 victory over the Texans at the Polo Grounds.  Though he’d end the season with five interceptions, this proved to be the highlight of the Michigan State defensive back’s pro career.  He sustained a severe injury to his shoulder and sternum during the 1961 preseason, and never played again.

Week 13 – December 4, 1960
Texans’ defensive tackle Paul Rochester was clearly the AFL’s top defensive player this week.  The 5-6 Texans needed to win their three remaining games in order to have a chance at the West division crown and the first-ever AFL post-season, and Rochester appeared bound and determined to do everything in his power to achieve that end.  The former Michigan Stater recorded two sacks (one solo and two shared) totaling 26 yards, along with a fumble recovery, in leading the Texans to a 24-0 trouncing of the powerful Oilers.  It was the first (and only) time the Oilers were shutout all season. 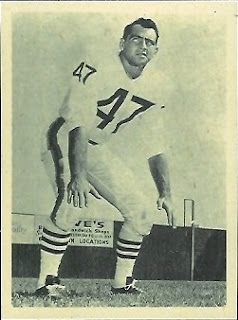 After being shutout the previous week against Dallas, the Oilers were desperate to rebound with a win against the visiting Buffalo Bills and clinch the Western title.  The Oilers were led by veteran defensive back Bobby Gordon, formerly with the NFL Chicago Cardinals, who picked off two passes to ensure the victory and give his team a berth in the AFL’s first championship game. 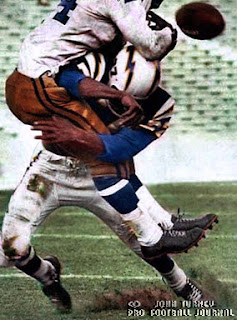 Chargers defensive back Charlie McNeil had three interceptions all season, but they all came in the final game of the regular season against the New York Titans.  Making just his fourth start this year, the alum of tiny Compton (CA) Community College certainly made the most of his opportunity!  McNeil returned his triumvirate of thefts for a total of 47 yards in leading the playoff-bound Chargers to a 50-43 victory at the Coliseum.