Does Everything Have to Be Political? The Carli Lloyd Saga

Of course, the above headlines have started a Twitter firestorm (as usual). And predictability it came down to two sides. Some seasoned NFL media, in our view, simply virtue signaling by saying that "I think she can do it" (How can you possibly know?) or others making fun of a Viking kicker who badly missed a field goal (and you think a woman cannot kick in NFL).

Others, quicky ridiculed by the aforementioned seasoned NFL media, mentioned her lack of size, experience, her advanced age for an NFL newbie (Fellow, people don't start playing baseball at your age, they retire). 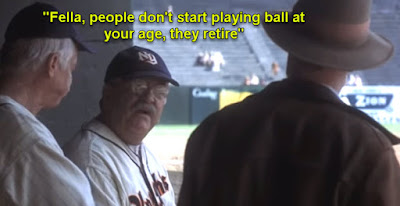 Now we don't take either side, we offer opinions on what does happen and have no rooting interest as to if she gets a tryout or if she doesn't.

We would suggest that someday a woman may kick in the NFL. We'd predict that she'd have to play high school football, do well, go to a college team, do well and then get drafted or signed by and NFL team. She'd be closer to 23 years old rather than 37. She will know about the snap, the hold, kickoffs, have to make some (not a lot) tackles, kickoff, execute some onside kicks, and all the other nuances that it takes to be an NFL kicker.

One cannot just walk off a soccer field and be an NFL kicker because you have a strong leg any more than a great NFL player could go to major league or World Cup soccer and do well.

If a person (not just a woman) wants an NFL tryout as a kicker at an advanced age should they play perhaps semi-pro for a season, earn the kicker spot, wow the league with their skills and in a world of social media show their successes (long kicks, short kicks, kicks in snow, onsides kicks, kickoffs) on Twitter or Youtube and gain the attention of the scouts. Why can't Carli Lloyd do that?

Even Jim Morris had to go to a tryout, then get signed and then prove himself. Roy Hobbs had to get discovered by Scotty Corson after blowing away his Double-A baseball league.

And why cannot the major media report on it along those lines? Why does it have to be Billy Jean King and Bobby Riggs? That is not what this is.

I would agree that some of the 'cons' on the subject focus too much on her size and possibility fo getting hurt. Honestly prevailing would be admitting there is some truth to that but maybe not to the level the naysayers suggest.

What the media should be focusing on, if they were truly reporters they would tell us more about what transpired on that field when she kicked a 55-yard field goal. How may kickers were there? Hay many did she make versus miss? Did they talk to the special teams coaches (even on background) and ask them if she passed the 'eye' test—steps, leg speed, the sound of the ball, things they know like the back of the hand.

So, we salute Lloyd for pushing this, it's a great try but we criticize the media for mostly being cheerleaders rather than reporters. It's nothing more than a worthless Twitter fight now (a naysayer posts and a so-called NFL reporter says 'should I block this guy now for giving his opinion?") and that is too bad.

It seems to us it's a lot of self-righteousness by a lot of pro-Carli media and them dumping on those raising fair questions and yes, a lot of sexist comments by a lot of fans. But fans are fans. The media is supposed to report some facts. Sure, we value the opinion of many in the media, we follow lots of them on Twitter, but we've seen precious few serious pieces on this subject.

We were a fan of Becca Longo who, at least, was trying to be the first NFL kicker in a way that was fair and equitable, by kicking in high school and attempting to do it in college. We also applauded Katie Hnida who kicked here at the University of New Mexico and do so with great courage after being treated horribly and criminally at the University of Colorado (where the punishment of the program was vastly unjust). Both earned their chances along the way.

So, come on media, give us the facts, THEN opine. Not the other way around. Tell us honestly, by talking to scouts and coaches, does she deserve a tryout based on being an all-time great soccer player or is this something to simply further divide people in this country over?

If so, we refuse to join the NFL media borg. Clay Travis (who we neither love or hate—except his business model, break us off a piece of how to make money in this industry) did make a great point when he suggested many commentators won't speak out because they will be targeted by said NFL media borg. We will see if we get backlash for not taking a political side and asking honest questions that pertain to this great athlete's abilities to kick in the NFL and why she gets to cut in front of the line (unless there are some 37-year old men who have never played football are getting NFL tryouts we've not read about).