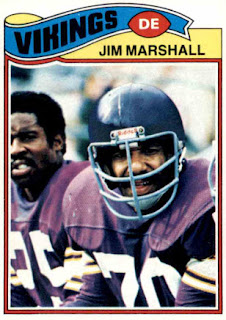 We read a lot of ink about Jim Marshall being deserving of the Hall of Fame. The thing cited most is his seasons (20) and his consecutive game streak (282) which are both impressive. However, what is not mentioned as much in the pro-Marshall articles we see is that he made just two Pro Bowls in those 20 seasons and was never a First-team All-Pro (he was Second-team three times and a Second-team All-NFC once). He recovered 29 defensive fumbles so that sometimes is thrown in there.

However, the Vikings media guide lists his sacks and they total 127 (we think it's likely closer to 130) but still, that is an average of between 6½ and 7 sacks per season—which is not that great. And in the years he was amassing his consecutive streak, 1972-79, he had a total of 29½ sacks or an average of about 3.7 sacks a season. So, he was just kind of  "there" for 40% of his career.

The positives for Marshall are that he was a tough, undersized player who was a fascinating off-field wildman. He was a favorite of Steve Sabol and was featured a lot in NFL FIlms features giving him legendary status in some ways. But while he has some of the boxes checked his honors and stats seem to be lacking for a Hall of Famer and we didn't find tons of testimonials for him, either. 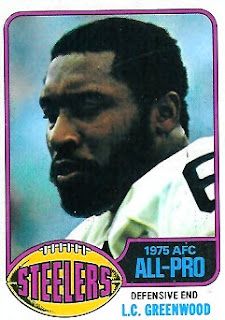 LC Greenwood seems to have a better case than most senior defensive ends. He has the four rings and was great in postseason games (credited with 12½ sacks in playoff games). He was only All-Pro twice and had no other Second-team All-Pro seasons to augment that but he did get voted to six Pro Bowls, however, in the 1970s there was not a lot of competition for Pro Bowls (Elvin Bethea went to the Pro Bowl in 1979 in a season he had 1½ sacks)

Greenwood's candidacy is perhaps a matter of how deep the voters want to go for 1970s defensive ends. Currently, there are four 1970s ends in the Hall—Jack Youngblood, Carl Eller, Claude Humphrey, and Elvin Bethea. Greenwood could make it five. He was All-Pro more than Bethea but less that the others. He went to fewer Pro Bowls than Bethea, though.

The Steelers list him with 73½ sacks but we have him at 78 or so. He was Pro Bowl-quality in 1971 but also was likely not Pro Bowl-level in 1979 when he did go, so his six selections is about right. But no matter you slice it, Greenwood was not a slam-dunk Hall of Famer. He's a classic borderline case whose postseason play will be the difference if the ever gets in—much like Lynn Swann and John Stallworth. He was a solid all-around end, but not the pass rush demon (averaged about 6½ sacks a season) that he is sometimes purported to be. 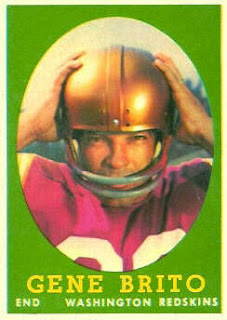 One player who does not get much mention for the Hall of Fame is Gene Brito. He's been a finalist before but a long time ago. In the 1950s he was a four-time All-Pro and also a Second-team All-Pro one additional season. He also was a CFL All-Star in the one season he played north of the border. His career was cut short by Lou Gehrig's disease and he passed away because of that illness.

According to us at PFJ (TJ Troup, Nick Webster, Chris Willis and myself) we think had there been an NFL Defensive Player of the Year award back in the day Brito would have earned it for 1955. And film study shows he had several big-time sack seasons. He was lighting quick off the ball and had a nice inside spin move—rare for that era. He really out to be in the discussion of the best defensive ends not in the Hall of Fame. 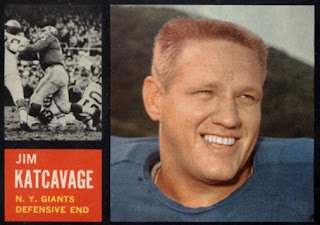 Jim Katcavage would have likely been the NFL Defensive Player of the Year in 1963 when he had 20 sacks. He was also All-Pro in 1961 and 1962 and was part of the 1956 NFL championship enjoyed by the Giants. In his non-All-Pro seasons, he was very solid and part of those great Giants defenses of the late-1950s.  He was also All-Conference in 1964 and 1966 making a total of six seasons he received postseason honors of some sort. 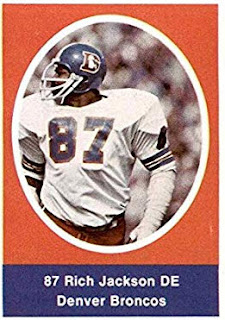 A pair of AFLers are intriguing.—Rich Jackson and Earl Faison. Jackson was a favorite of Paul Zimmerman the famed Sports Illustrated writer and Zim advocated his election to the Hall of Fame. Jackson began as a linebacker for the Raiders in 1966 and almost ended as a nose tackle for the Patriots (in a deal that never happened but was close). But Jackson did end with the Cleveland Browns in 1972 and there he was a shell of himself.

Jackson was as good a defensive end as there was in Pro Football from 1968-70. He was a dominant run defender and was a great pass rusher as well. The Broncos moved him around some but he was predominately a left defensive end and has tremendous power—he was a strong as any defensive lineman ever. He averaged double-digit sacks in that 1968-70 window and then in 1971 he blew out a knee. 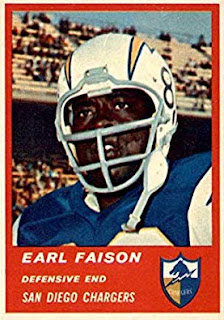 Faison was an amazing physical specimen, he was 6-5, 270 pounds and ran a 5.8 fifty-yard dash which translates to maybe a 4.7-4.8 forty. He had the strength of a powerlifter and had long arms—he deflected a lot of passes and picked off six. He could get to the quarterback regularly but film study does show a lack of effort at times.

In the Chargers scheme the defensive ends would sometimes standup in a two-point stance creating a 3-4 front and it was pretty impressive watching Faison play that spot at 270 pounds.

Faison was a four-time All-AFL pick and was a second-teamer once. Like Jackson, his career ended early. His back went out on him and he finished as a Dolphin and like Jackson as a Brown, he was a shell of his former self. 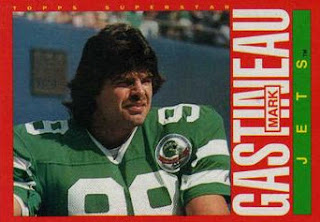 We posted about Mark Gastineau recently. He has the All-Pros/honors (Four All-Pro, one Second-team) and the stats (averaged about 11 sacks a season) and even some good testimonials. But the knock was he didn't play the run well. And we think that is accurate, however, it wasn't as bad as it was made out to me, it's not like he was worse than other great rushers of the 1980s and 1990s. So, fairness would dictate that he's part of the discussion.
Posted by John Turney at 12:25 PM