Bobby Wagner and His Quest for 200 Tackles 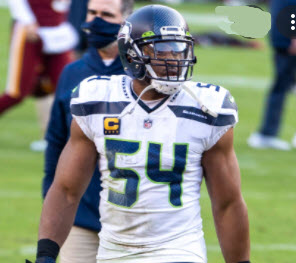 There was a lot of talk before the 2021 season about all the records that would be broken with the new 17-game schedule. Alas, it seems we may have to wait a little while as—despite an interesting and entertaining season - absent a late-season breakout, it doesn’t seem that any individual records will be broken.
One possibility is that Bobby Wagner could break the single-season tackle record; Wagner has 152 tackles through 13 games putting him on pace for 199 on the full 17-game season, and that’s the all-time single-season record . . . right?  Well not really, it’s a far more complicated story than that.

The NFL started keeping basic statistics as far back as the 1930s, but frequently readers of this site, as well as those familiar with the research of John Turney and myself on sacks will know that not everything available today was tallied historically.

Now, this is an excerpt from the fantastic 1987 book The Hidden Game of Pro Football, if you don’t have a copy, you must pick one up at whatever cost - it’s the best primer on thinking about Football statically that there is, the Rosetta Stone of football analytics. 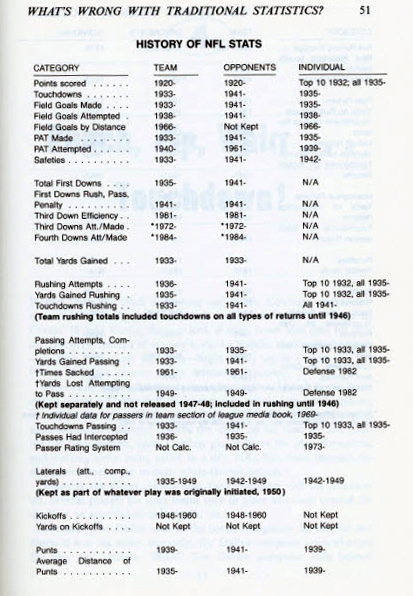 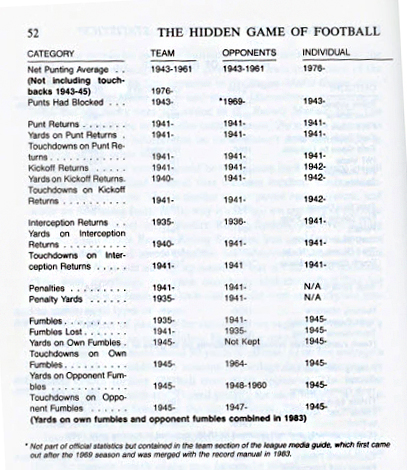 But note that even this does not reference tackles.  There were no official NFL tackles in 1987.  So when were tackles first tallied?

Well, the answer is simple but nuanced, the simple answer is, essentially, forever.

According to Weeb Ewbank’s personal records (courtesy of the University of Miami Ohio’s Cradle of Coaches Archive), Derrell Palmer has 22 Primary tackles and 25 Assists in 1952. Now Paul Brown himself was a meticulous type and his assistants—like Weeb—took after him, but this level of detail from way back in 1952 is telling.

Do we think George Halas didn’t even just know the total number of times George Conner fell on a ball career a few years earlier? 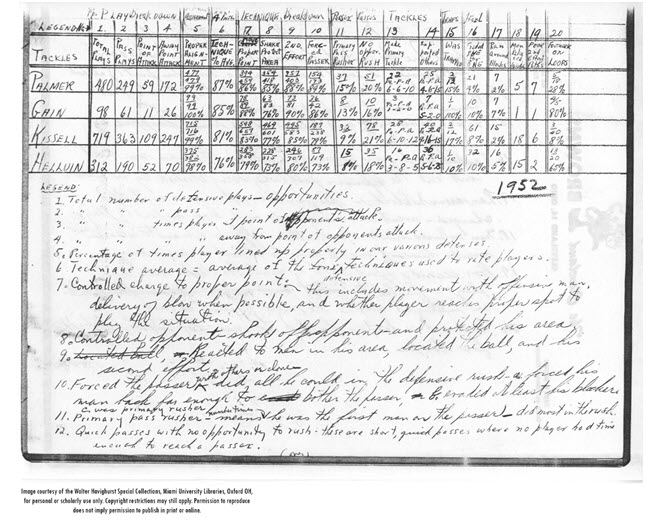 Did you know he outpaced an amazing performance by a defensive tackle who had 135 tackles that same season (probably still the per-game tackle record for a D-lineman) a man named Big Daddy Lipscomb?

Did you know that Chuck Bednarik, the 60-minute man, had 60 tackles in the Philadelphia Eagles 1960 championship season. It’s true, just add up the tackles compiled on the published tackle charts contained in the terms play-by-plays.

See below Bednarik’s one assisted tackle on the October 9th, 1960 tilt against the St.Louis Cardinals. 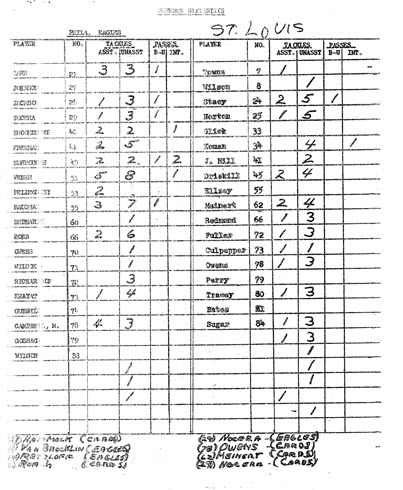 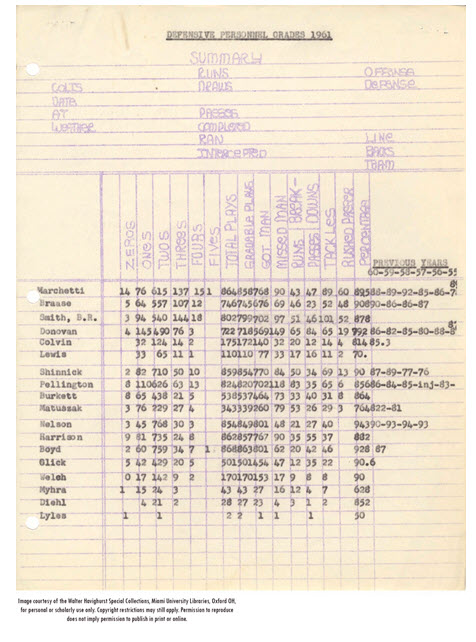 In 1962 the Chicago Bears were paced, no surprise, by HOF linebacker Bill George with 121, numbers which were probably kept by forward-looking Bears assistant George Allen.

In each case, except Bednarik’s, these numbers were kept - as we imagine they have been forever—by each team's coaches.  Nineteen sixty represents a somewhat important milestone as it’s the date beyond which it became standard more and more for tackle statistics to be kept consistently across many teams in Press-Box statistics.

This is important because rushing yards, passing TD’s, interceptions—you name it—the statistics that eventually become “official” were sourced from the Press-Box stats. Jim Brown’s 1,863 Rushing Yards in 1963—from press-box stats. Night Train Lane’s 14 Interceptions in 1952—from press-box stats.  And, by the way, sometimes the press-box got it wrong; you can read many accounts of that in this very site, but those are the numbers which became official, though teams do have the opportunity to ask for corrections of those press-box stats (a story for another day).

So for the early history of the league, we have tackle statistics kept by coaches for their teams and largely unpublished. Then, in the 1960s, press boxes began keeping tackles alongside Coaches and these numbers were published in the tackle charts of game play-by-plays.

Early keepers of tackle charts were the Eagles, 49ers, Cowboys, Rams, and most AFL clubs; clubs like the Steelers, Bears, Cardinals, and Giants held out around the merger prior to consistently keeping Press-Box Tackle-Charts.  By 1970 almost all NFL games had some manner of obtaining press-box tackles, either from a sampled tackle-chart or by tacklers being listed in the detailed play-by-play text.

As press-box tackles became prevalent a challenge quickly emerged, it became clear that not all press-box spotters were assigning tackles in the same way, this meant that some awarded more tackles than others. This wasn’t unique to Press-Box stats, team tackle counts compiled by coaches clearly varied widely. We all clearly “know it when we see it” regarding tackles, but some circumstances are more blurry.

If a defender causes a runner to step out of bounds without contact, is that a tackle? If a runner gives himself up, was it caused by the closest defender? When a runner is wrapped up by one defender and then taken to the ground by a second, who gets credit for the tackle . . . or do both?

The Cleveland Browns press-box of the 1970s would frequently credit three tacklers with bringing down a ball carrier. And certain spotters would credit a tackle to the closest defender (or perhaps just their favorite?) when the quarterback kneeled, see below from the Saints. It wasn’t until the late 1990s that press-box tackle stats from gamebooks became largely standardized. 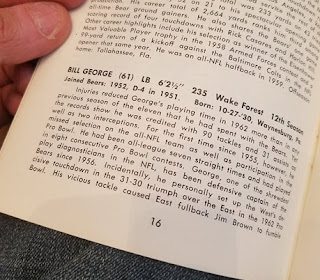 Pro Football Reference, who have published our sack data, have done an excellent job at compiling, in a consumable manner, the statistical history of the NFL as well as the other major sports.  But on tackles, the numbers available are only quite recent and are a mixture of eras 2, 4, and 5 that we’ve identified here. We plan to work with them to try an correct this record and present as fair a view of tackles as is possible. In the meantime, we will lay out for you what’s best known about the best single-season era-by-era.

First, all of these numbers should be taken with a huge grain of salt, they were massively inconsistent and largely not intended for outside consumption . . . and here we are consuming them.

Sporadic availability makes these by far the largest numbers of this era though Joe Schmidt’s aforementioned 157 in 1957 would amount to 13 per game and 222 in a 17-game schedule.  All in all these numbers aren’t sufficient widely publicized to garner much attention or to be concerned about their accuracy though some teams do have enough of their play-by-plays, such as the aforementioned Nobis 1966 season.

Again, these must be understood to have a large number of assists in the tackle numbers and as a result, we see some fairly egregious examples of tackle inflation among these figures.

The highest single-season tackle number of this era we’ve seen is Randy Gradishar’s 286 Total Tackles in 1978 compiled from 196 Solo Tackles and 90 Assisted tackles. Gradishar was a star linebacker for the Broncos in the 1970s and probably the best linebacker overall in pass coverage, multiple All-Pros, Pro Bowls, and a Defensive Player of the Year award have not landed Gradishar in the Hall of Fame, an honor he deserves.

Some actually believe it is the inflated tackle numbers he was credited with that have been held against him since during the Hall of Fame discussions voters actually brought up the tackle numbers brought up by the presented and said they didn't believe them.

How do we think about whether or not those tackles are inflated, the ’78 Broncos faced 779 plays from scrimmage where the result was not a Touchdown; therefore there were 779 Tackle Opportunities.  As we know, more than one player can be in on a tackle, so a 1 : 1 ratio isn’t logical, but the team credited a total of 1682 tackles in 1978, implying 2.2 tacklers on every single play.  Our rule of thumb, derived from press-box numbers is that this figure should be about 1.25 : 1, implying that these tackle figures were inflated by ~73%.

Further, press-box tackle figures for Gradishar in 1978 have him at 197 tackles. Which is still the third-best ever coming from press-box totals, so the Hall of Fame voters ought to note that and not penalize him for something out of his control.

Another favorite inflated season —and the second-highest observed number of this cohort—is Fulton Kuykendall’s 284 for the Atlanta Falcons in 1978.  Now Captain Crazy should probably get credit for his spectacular hairdo—but when comparing what coaches compiled versus what the press-box said about The Captain’s exploits it is clear there was serious inflation going on here.  Press-box Tackle-Charts credited Kuykendall with just 117 Total Tackles in 1978, far less than half his Teams’ figure.

This is something we should always contemplate as we think about coach/team figures, we often do have the press-box numbers to corroborate, if the two figures are close, that tells us something valuable; how likely is it that two separate sources conspired to create high numbers for a particular individual or team. 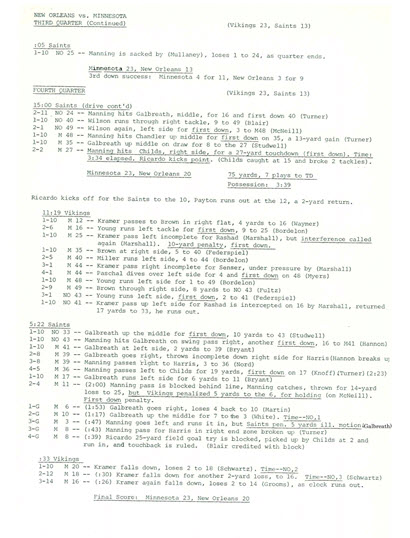 Most of the other highest known and published Coaches / Team Tackle numbers from the era suffer from the same inflation. In fact, specific coaches and teams were renowned for it; Jets Inside and Middle Linebackers had their tackle inflated be it Stan Blinka, Bob Crable, Kyle Clifton, etc.  The most publicized of these inflated tackle numbers came from the Atlanta Falcons and Jessie Tuggle.

Spielman is the most recent and likely most reliable.  No Tuggle at all, once you’ve gone to PBP numbers.

We shouldn’t be surprised to see Lewis and Kuechley prominent. Where does that leave us with Wagner?  With 152 through 13 games, he’s on pace for 199 in 17 which would be the record for the Modern Era of Press-Box Tackles.  Even in a 16-game season, he’s on pace for 187, which would still surpass Ray Lewis for this Modern-Era title.

We believe the Spielman number is believable enough that he’s almost certainly above Wagner, but we acknowledge that the eras and the numbers are different.  Where is Wagner alongside Joe Schmidt, Dick Butkus, Randy Gradishar, and Tommy Nobis—nobody knows.

We’ll leave you with one thought. A while back we were discussing some of the early-80’s New Orleans Saints inflated Tackle numbers with the PFJ’s very own T.J. Troup. We noted that per coach/team numbers Glen Redd had 254 Tackles in 1981 followed by Jim Kovach with 225. The team credited over 1800 Tackles to players all told even though just 748 Tackle opportunities existed.
Coach replied, “As far as I know Jim Kovach made only one tackle in his career when Walter Payton broke the all-time rushing record, and I saw it on film.”  Tackle stats and tackle records, who knows, but you know them when you see them.
Posted by John Turney at 1:51 PM