Rodgers at Home in December 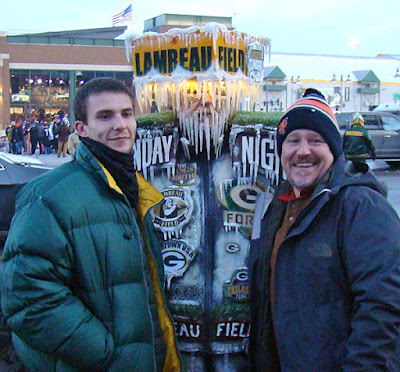 For two quarters, the Bears had the Packers reeling. But Chicago picked the wrong time and the wrong place to stage an upset.

Aaron Rodgers, Green Bay’s starting quarterback these past 14 years, is nearly invincible at home in December. He again provided evidence of that Sunday night as his Packers downed the Bears 45-30 to improve to 10-3 and remain in the race for the NFC’s top seed in the playoffs.

Here’s a question for you Green and Gold fans: Anything in the first half spark concern?

Maybe: a.) two first-quarter sacks by Chicago’s Robert Quinn; b.) Malik Taylor’s botched attempt to field a kickoff that gave the Packers the ball at the five instead of the 40 had he let it roll out of bounds; or c.) Mason Crosby’s out-of-bounds kickoff that afforded a short field on which the Bears scored in three plays?

Anything in the first half trigger panic?

In particular, the long gains stand out. All three came in the second quarter in which the Bears exploded for 24 points.

In ringing the bell from long distance, perhaps the Bears were on to something. Only twice previously in more than 100 years of regular-season football had Green Bay given up three touchdowns of 40 or more yards in a single quarter. And both times – against the Rams in 1945 (20-7) and Lions in 1951 (52-35) – the Packers lost.

Up 27-21 at the break, the Bears and their coach Matt Nagy were feeling good.

“Matt Nagy was so excited and thrilled for his team when I caught up with him at halftime,” said NBC sideline reporter Kathryn Tappen. “He said, ‘I’m having so much fun.’”

Was Nagy not aware of Rodger’s record at Lambeau Field in December? With an entire half to play, the record-setting quarterback had plenty of time to improve upon an already impressive track record.

Stathead Football claims to be “the most powerful research tool in sports.” Whether true or not, the site is more than capable of producing interesting finds.

A search for passers who attempted at least 100 tosses in regular-season games at home in December from 1950 to 2021 yields 281 names. Those on the list range from Don Trull or Stan Gelbaugh to Hall of Famers such as Johnny Unitas or Joe Montana.

Players can be ranked by quantity – attempts, completions, yards passing and more – or quality – passer rating and winning percentage.

In deconstructing Chicago, Rodgers completed 29 of 37 passes for 341 yards and four touchdowns. His passer rating (141.1) was nearly double that of his counterpart, Justin Fields (70.8).

Rodgers completed 10 in a row, from late in the second quarter until deep into the third. Those 10 passes produced 162 yards and two touchdowns – a 38-yarder to Davante Adams and a 23-yarder to Aaron Jones.

His team up 38-27 heading into the fourth, Rodgers didn’t flinch. He completed six straight for 39 yards and a touchdown as the Packers took eight minutes, 38 seconds off the clock to go up 45-27 with 4:33 left.

For Rodgers, this was his sixth 300-yard performance in December at Lambeau. It was the 16th time he compiled a rating of 100 or better.

Numbers aside, Rodgers just wasn’t going to allow Chicago beat him on his home turf. Not in December, anyway.