By John Turney
A few hours ago word came over the Internet that Claude Humphrey, Hall of Fame defensive end, has passed away at 77. No cause was given at the time of this posting.
Humphrey started playing football by accident, "My mother sent me to the store to get some baking powder. On the way I cut across the field at Lester Junior High School I stopped to watch and the coach, Jake Peacock, saw me. I was a pretty large boy. Next thing I know I was out there scrimmaging in nothing but a pair of shorts. No pads, not football shoes, no nothing. But coach Peacock told be to come around the next day and he's issue me some equipment. And that's the way it all began"
No word on is Mrs. Humphrey got her baking powder.
Humphrey went to Lester High School (Memphis, Tennessee) and excelled in hoops as well as in football and turned down scholarship offers from colleges like Illinois and Nebraska because he felt more comfortable at  a predominately black university and picked Tennessee A&I (now Tennessee State University)
Humphrey was an All-American (Sporting News, Time, Pittsburgh Courier) as well as AP's "Little All-American in 1967 at Tennessee State University where he helped the school to a 35-3-1 record from 1965-67. Those winning seasons were something Humphrey was proud of, "We were national champions two years in a row" (1965 and 1966).
Humphrey played in four collegiate All-Star games after his senior season—the Senior Bowl, the Blue-Gray Game, the Coaches All-American Game and the College All-Star game. As a junior, he was named All-America by the Pittsburgh Courier and Ebony magazine.
He was drafted in the first round of the 1968 NFL Draft as the third overall choice by the Atlanta Falcons. As a rookie, he was the NFL Defensive Rookie of the Year in 1968 as well as on the Oakland Tribune All-Rookie team and totaled 11½ sacks and forced five fumbles, recovering three.
His sophomore NFL season he was Second-team All-Pro totaled 10½ sacks and had a scoop and score. In 1970 he made the Pro Bowl, was again Second-team All-Pro and All-NFC and sacked the quarterback ten times. In 1971 he had First-team All-Pro the first of five times in his career and had 13 sacks. The next few years were much the same All-Pro, Pro Bowl, All- NFC, but the team was around .500 until 1974 when the wheels came off and they went 3-11. 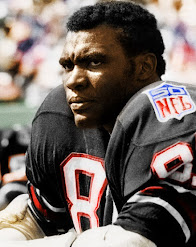 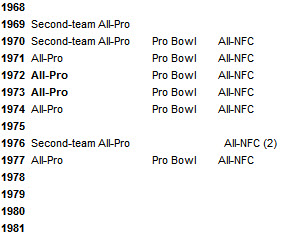 From 1969-77 Humphrey was either First- or Second-team All-Pro with the exception of 1975 when he missed the season with a knee injury and he average 11 sacks per season in that same span.
His last Pro Bowl and All-Pro season was in 1977 as a member of the famed “Grits Blitz” defense that still holds the modern NFL record for fewest points allowed in a season with 129 (9.2 per game) and the team went just 7-7.
On the "Grits Blitz" Humphrey once said, "It was mostly scheme and Jerry Glanville did a great job with us. We didn't have top-notch players but we took a chance on giving up big plays and we ended up setting the record. We got to the quarterback a lot. Glanville was a very good coach but I don't think his elevator went to the top floor.'' 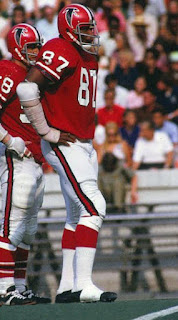 In 1978 Humphrey abruptly retired from the Falcons after four games. The Falcons were 1-3. "It's me. it has nothing to do with the team. I just couldn't get myself ready to play", Humphrey told the media at the time. People close to the situation reported that he didn't like the defensive scheme on third downs where the defense used a 3-3 nickel, using a three-man line and blitzing on third downs more and more, now and putting the left end head up in those situations as having more to do with the "retirement". It was never really confirmed because Humphrey was closed-mouth about the situation.

In 1979 Dick Vermeil talked Humphrey out of retirement to be the Eagles designated pass rusher on the left side. Vermeil was able to pull this off because his defensive coordinator was Marion Campbell who was Humphrey's coach in Atlanta and for whom Humphrey had great affection and for whom he wanted to play again. So a trade was effected to make Humphrey an Eagle.
Campbell was a fan of Humphrey as well, "Hell, we used to cup up films of Humphrey and used them for our defensive clinics".
However, an injury in camp to the starter Dennis Harrison put Humphrey back in the starter's position in the 3-4 defense and he did very well but Campbell told the media that they would split time in the base 3-4 and in passing downs Harrison would move to tackle and Humphrey would play the "40 end".
In 1980 he did play the 40 end spot exclusively in nickel defense for the Eagles and totaled a career-high 15½ sacks as the Eagles went to the Super Bowl. 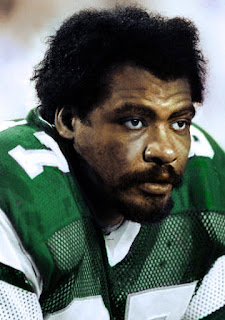 Through the Eagles website Vermeil released this statement, "Claude was a tremendous inspiration for a young coach. Knowing he was a veteran, I would ask him if he wanted a day off from time to time in Training Camp. But he always refused. He never took off a practice or a wind sprint. He had a fantastic work ethic. In fact, Claude made up T-shirts that the guys loved – 'I Survived Dick Vermeil's Training Camp,' or whatever it said, and it was just perfect."
Humphrey was a Deacon Jones disciple, copying the head slap (until outlawed) and other moves. He was similar in size (6-5, 255) and had good natural strength and quickness. He had a great first step and agility to get past even the best tackles, and in his era, the best tackles were on the right side—Rayfield Wright, Ron Yary, Dan Deirdorf, Russ Washington, even his own teammate Geroge Kunz and so on.
Claude was an on-field talker, in a good-natured, non-trash talking way. "Something I picked up in college an "HBCU-thing" but he'd chat up the tackle blocking him or the quarterback he was chasing. He was a team leader by word and deed.
After his career that loquaciousness paid off when he landed a role in the "Dukes of Hazzard" as a gun-toting strong man—
Humphrey would have been in the Hall of Fame sooner but he didn't have the best presenter at times. Back a few presented ago when he was given the case for Humphrey the excellent writer but perhaps not the best public speaker would give the facts then go into "I don't know why he quit that one year" then get back to the positives then meander into the Tommy Nobis case, who wasn't on the list, then back to Humphrey.
However, right won out in end and Humphrey got was justly elected to the Pro Football Hall of Fame in 2014. He was also inducted into the Black College Football Hall of Fame in 2012. The Falcons honored Humphrey in 2008 by placing him in their Ring of Honor. The Tennessee Sports Hall of Fame got the ball rolling by selecting him in 1988 and he is also a member of the Georgia Hall of Fame and the Atlanta Sports Hall of Fame and the Lester High School Hall of Fame.
Career stats— 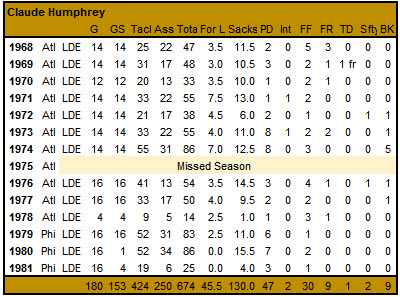