By John Turney
We certainly understand that the QB passer rating is not the only or best statistic to measure a quarterback's performance, but it has been around since 1973, and football fans who what it means in general and it can give a thumbnail sketch of a quarterback's efficiency.
As Steve Young once told is, "It's hard to do well in those categories, to avoid interceptions and to be accurate and to throw touchdowns". Amen. So the stat does have some value.
That said here are the first 8 games (essentially the first half of the season, bye weeks don't always line up to divide it by weeks) and the last 7 games—
Charts via Stathead: HERE 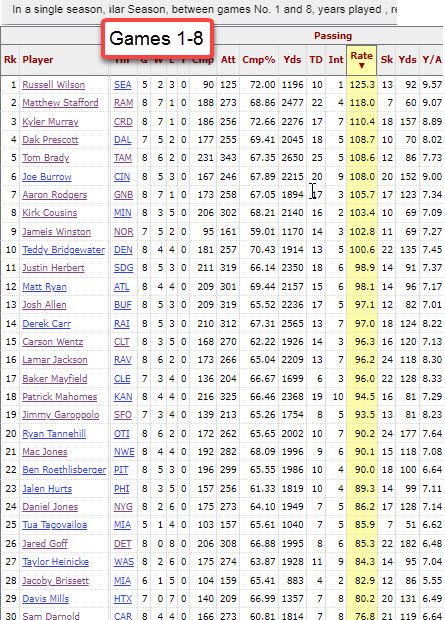 Russell Wilson, Matthew Stafford, Kyler Murray, Dak Prescott, Tom Brady were all tearing up up the first half of the season. In the nearly finished second half (two games to go) Wilson's passer rating is 21st, Stafford's is 19th, Murray's is 24th, Brady's is 18th, Dak's is 12th with a big boost last night. 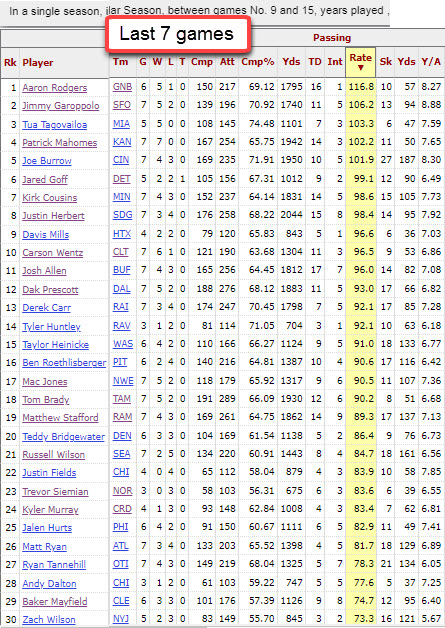 In the last de facto seven weeks Mahomes' rank was 18th in the first half to 4th in the second half. Jimmy Garoppolo went from 19th to second. Jared Goff went from 26th to 6th.
On the consistent tip was Aaron Rodgers went from 7th to 1st. Joe Burrow 6th to 5th. Justin Herbert went from 11th to 8th. Josh Allen was 13th then jumped two spots to 11th.
This doesn't mean a ton, we don't think, but it does show that Mahomes and his Chiefs are rolling as are the Packers with Rogers at the helm. In a "what-have-you-done-lately" league when the playoffs roll around what someone did in September or October may not matter as much as what they did in November and December.
Much football is yet to be played. But we've seen things to keep an eye on—Mahomes, Garoppolo, Rodgers, Burrow, are getting hot and will be tough "outs" in the playoffs. It should be a scary proposition for AFC teams for Mahomes to be "righted" just in time for the playoffs.
Joe Burrow is a wildcard—he's Joe Namath.
Aaron Rodgers is Aaron Rodgers. He is the front-runner for MVP. though we have other ideas (Cooper Kupp, cough, cough). In all fairness the Packers, at this point seem like the team to beat in the NFC. But they were the last two years, too.
The 49ers are hot. They will go as far as the defense can take them along with a power running game and a now accurate, quick release Jimmy Garoppolo. They are a true wild card. Could do well or might not make the playoffs.
We saw the first-half Stafford that performed at a very high level then saw a nosedive. But he's always been streaky. If, in the playoffs, he can play like he did in the first eight weeks, the Rams have a chance to go far—they can beat anyone. If he plays like he has the last seven-week stretch, specifically in the games where he gives away points like they are candy, then it will be a problem.
The Rams chances rest with Stafford. Good Stafford—they could win the NFC. Any one game of bad Stafford in the playoffs, they are out.
Dak Prescott and the Cowboys, ah who knows?
This year reminds us of 1980 in terms of how wide-open it is so expect surprises in the playoffs, just like that season. Or, we could be totally wrong.
Posted by John Turney at 7:01 AM