NBC Boots It On The Tackle Eligible Tonight. Kind Of.

In the 42-7 Halftime score there is a lot going on if one is a Cowboys fan. Among the first-half highlights, Terence Steele's touchdown reception was certainly one of the highlights.

However few remember that Wright was a tight end in early1968 (1967 as well) and didn't switch to tackle until later in the season, around mid-season though we did see evidence that Wright got work at tackle in the preseason.

This is the Cowboys roster and depth chart from the 1968 Week Five clash with the Eagles, the game he caught the touchdown pass (which was 15 yards)— 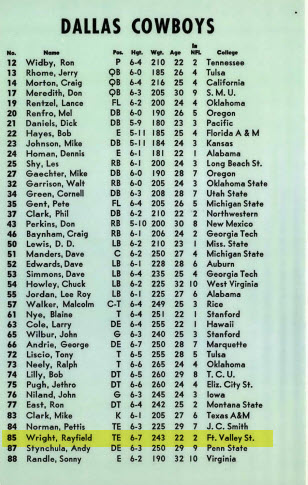 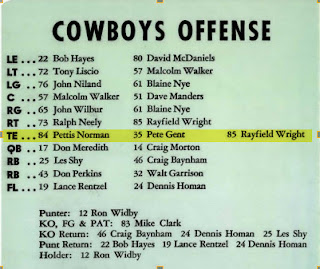 In Week 8 Wright was moved to the backup right tackle position behind Ralph Neely.

In Week 13 he filled in for Pettis Norman and started at tight end. 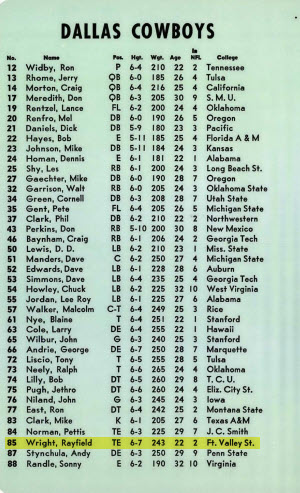 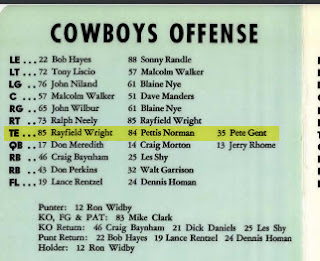 In the playoffs, Wright was listed as a tackle in the depth chart and on the roster— 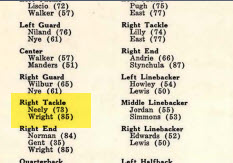 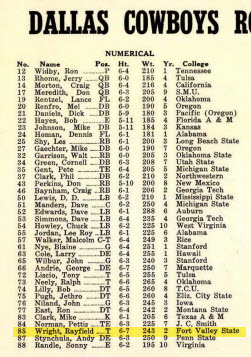 So, it is fair to say he was a backup tackle in the latter part of the 1968 season, but he was a backup tight end for the first half then closed the season with a start at the tight end position, though if something happened to one of the tight ends in the playoffs he would have likely stepped in.
As for the touchdown in week five. He was, as the roster and depth chart showed, a tight end. And the catch went for 15 yards, not the stuff of a tackle-eligible (usually they are for a yard or two), and he was wearing uniform #85, so he was already eligible, not a lineman.
We cannot category rule it out because we have not seen the play all we know is it was 4th and one on the Eagle 15-yard line and it was called a "quick pop" by flanker Lance Rentzel.  It was a short-yardage and goalline-type play. But common sense dictates he was not an eligible tackle catching a touchdown on that play and according to the story we located Wright was lined up next to Neely. 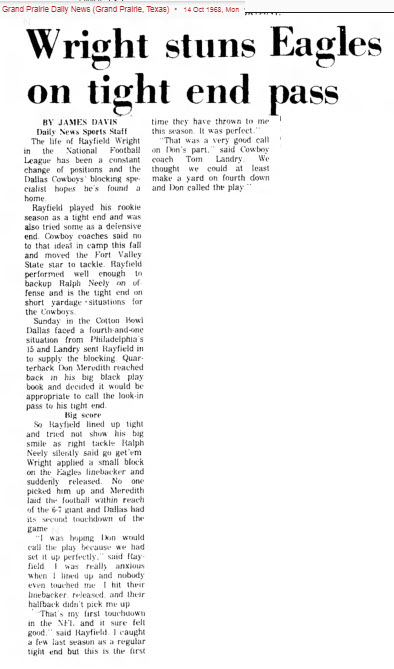 In the parlance of the day, it was called a "tight end look-in".
We suspect some did a quick search and saw that some places list Wright as wearing a tackle's number in 1968 but we find no evidence of that and the NBC crew maybe relied on that.
Anyway, congrats to Terence Steele. Well done.
Posted by John Turney at 7:48 PM