Terrell Owens Will Be Elected to the Hall of Fame. Eventually. 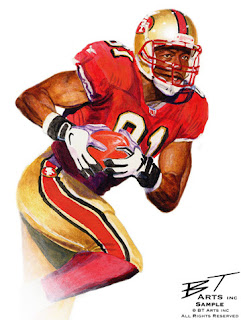 Terrell Owens was again "snubbed" by the Hall of Fame selection committee. It was his second year of eligibility. Next year he's up for the third time and will be looked at with Randy Moss and, likely, Isaac Bruce and possibly others.

His numbers are too strong to deny for too long. The question was always this:  Were his numbers strong enough to be in the rarified air with Rice? Many think there is something special about getting in the Hall of Fame in the first year of eligibility, that it carries an extra distinction. While there are maybe a few who got in right away who does measure up to that, with a clear example of a Hutson or Rice, there is a great gauge of what is required for that extra cachet.

It seems reasonable to believe Owens does not have that perfect of a "resume" in you will. being second in this or third in that is not being first in this and first in that.

And since the Hall of Fame is not just about numbers, Owens lacks the Super Bowl rings, and the intangibles and even some of the testimonials. What are testimonials? It's the quotes that voters find from opposing players, some on the record, some off. Sometimes, especially for older candidates, they can be found in the literature of the day. Once in a while, one can find recent examples.

Here is one: " Steve Smith, who suffered a torn Achilles earlier this season, said Bailey was the best cornerback he had faced in his long career.

During an appearance Tuesday on the nationally-syndicated Talk of Fame Network radio broadcast, Smith had this to say about Bailey:  “The one guy who’s always jumped out at me was Champ Bailey".

Those who support Owens should collect this kind of thing from defensive backs on the era, and do it in a way they are getting honest answers. Frankly, it is our understanding that the HOF selection committee did this (and they do it routinely for almost all candidates) and there were not as many glowing reviews as you might expect.

Couple that with his reputation for dropped passes and even leading the NFL in that category twice, according to Stats, LLC, which has been tracking that statistic since 1993, then you have a good case for not being a first-ballot player.

The numbers are his strongest case, but it seems like many need to be reminded that this is a live ball era in passing statistics. Just as one cannot compare MLB pitching stats from 1968 to 1998. Or hitting stats from those eras.

The NFL had it's own dead-ball era, from 1970-77. The passing stats were way down from even the 1960s because defenses had become more dominant. The reasons why are a discussion for another day. In 1978 the passing game opened up. In 1994 there was yet another leap.

Here are two charts, one for Terrell Owens, the other for Harold Jackson, whose career spanned from 1969-83, though in 1982 he played only one game after joining the Vikings to fill in during their playoff run due to injuries to other wide receivers. But, to make both charts 15 years, we counted 1982, which hurts Jackson in this comparison.

With a hat tip to Pro Football Reference here is where they ranked in their respective eras. 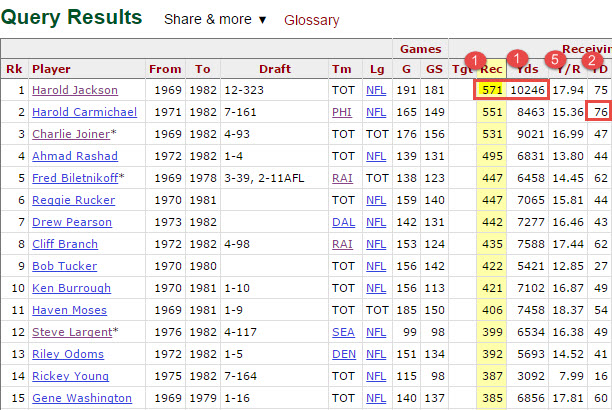 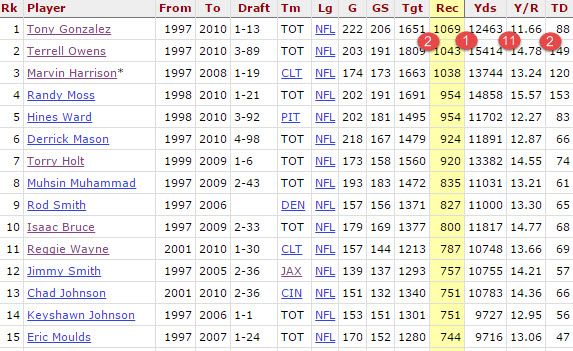 We are not comparing the skills of Owens versus Jackson, this illustrates that there are players, Jackson being one of them, who were dominant in their era that the current critics of the Hall of Fame process never mention.

If Owens's case is based on numbers and there is another player with numbers, relatively speaking, are just as good and that player is not in, then in fairness, speak out for both. Otherwise, it undercuts the case that somehow, by having to wait for a few years it is a personal vendetta against Owens by a cabal of writers.

Owens is deserving of the Hall of Fame, but no more than Marvin Harrison, Tim Brown, Cris Carter, Michael Irvin, Andre Reed, Charlie Joiner, Art Monk and others. All of them, in our view, didn't meet the Rice standard or even the Warfield, Alworth or Hutson standard in terms of first-ballot.

We don't claim to be all-knowing, and obviously reasonable people can disagree with us and we won't be offended. It just seems like this is a good case for those who are posting as though a two-year wait is the same as not thinking a player is not a Hall of Famer to respect the view of those who put in a lot of time researching these things and not insult them at will.

We contend, after years of study, that the Hall of Fame is about numbers, honors, testimonials, rings and intangibles—all those things and perhaps more. It's not about just one of those things, either, i.e. solo numero or solo honoribus (honors alone).  Those who get in on the first try really should have high scores in most, if not all, of those things. It's what separates Jim Brown and Leroy Kelly, which no slight intended against Kelly.