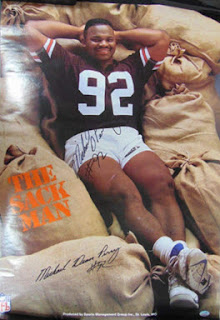 In a recent Monday Night Football profile some Hall of Fame defensive linemen were asked to compare Aaron Donald to a player from their era and the name John Randle came up the most and stylistically and physically that makes the most sense.
However, Randle, in his 14-year Hall of Fame career only had 44.0 run stuffs (tackles for loss) a number Donald surpassed in 2018.
Using basic numbers, a player that is more comparable as a combination run stuffer and pass rusher might be Michael Dean Perry. Of course, Perry is not the pass rusher Randle was or Donald is. Randle averaged 10 sacks a season in his career, and in his first six seasons Perry average eight.  Donald is averaging 13 per 16 games, an unheard-of number for a defensive tackle.
But consider the stuffs. Donald, in his first six seasons, averaged ten stuffs, Perry averaged 8 per season in his ten-year career, including his rookie season when he was really only a third-down rusher and his last season when he was a role player, really. His "real" average was about nine stuffs a year.
So, while we don't put Perry in Donald's class as a year-after-year consensus All-Pro, he was a consensus All-Pro twice and a First-team All-Pro three times, and a Second-team All-Pro one additional season. In all, he received post-season honors eight times in ten seasons. Not bad.
Perry's career as a two-way defensive tackle is worth nothing we think. Here is a chart with his career numbers— 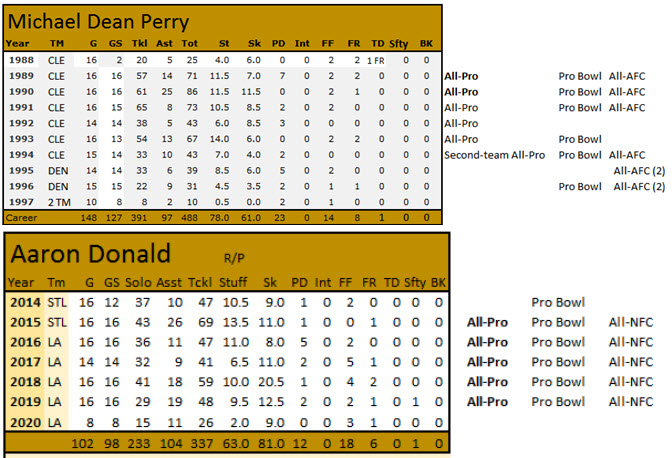