By John Turney and TJ Troup 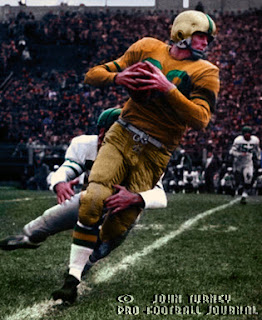 Going back and picking award-winners in the past is always going to have pitfalls and we fully acknowledge that fact. However, in the spirit of fun and adventure and using film study and research now available it seems like it would be interesting to try and pick an "as if" or retroactive rookie squared for the decade prior to UPI picking theirs, beginning in 1961.
There were a lot of great players with great rookie seasons in that span and we'd like to honor them and recognize their achievements.
So, using what we now know via the aforementioned research and film study here is the 1952 PFJ All-Rookie Team— Night Train Lane would be a pretty good Defensive Rookie of the Year (a still NFL-record 14 interceptions) for '52 and we've seen plenty of film of Gino Marchetti with the Texans to know he came into the NFL as a dominant player.
Offensive Billy Howton would be the top guy. On a per-game basis, his rookie season still matches with the best ever in touchdown receptions. In twelve games Howton caught 53 passes for 1,231 yards (23.2 yards per catch) and 13 touchdowns. It's a pretty good set of rookie running backs.
It should be noted that many players were two-way guys who played both offense and defense and only Troup's film study can sort through that but in general this is at least a jumping off point for discussions about the rookies in the 1950s.
Posted by John Turney at 2:58 PM