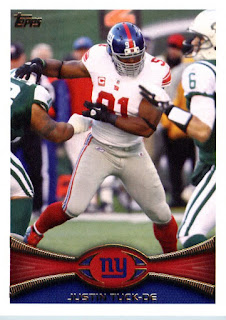 Justin Tuck took over the left defensive end position from Hall of Famer Michael Strahan and did a good job but his career didn't last all that long—an eight-year peak. And he just had six seasons as Strahan's replacement. But when healthy he was a very, very good player.
In 2007 he was someone who played inside on pass rush downs and was a major part of the 2007 win over the Patriots in the Super Bowl, in fact, some (us included) think he should have been the MVP of that game and even the MVP of the 2011 Super Bowl, in the running at least.
He was a very good pass rusher but also had a nose for stopping the run, usually getting anywhere from 6-10 run stuffs—which in our view is a good number. Combining sacks and run stuffs reflect his effectiveness in both (four years of 17.5 or more). Tuck's point of attack run defense was good but where he made his bones is in seeking out and making plays on the run, slipping a tackle or guard then getting to the running back.

As a rusher he was great at slapping the shoulder of the blocker then working his move off of that, a rip or inside club. He had excellent balance and that base we mentioned to pull that off.  Both Football Outsiders and Pro Football Focus have good hurry/pressure numbers in his prime as well. Oddly, we noticed that one thing he didn't always do is explode off the snap like some—early in his career he was just a hair slow, or likely it was intentional to read the block for a split second then make his move. Regardless, at times he'd get off very well, we just noticed a slight "read" or hesitation at times . . . not always and not a flaw in his game, just interesting to notice it sometimes.
The main thing is watching him—it was impressive. He had good base and showed good strength and quickness as well. He wasn't a high-cut edge rusher, he was a solidly built complete player. His combine/pro day numbers were amazing, a 4.6 forty, 24 reps on the bench a 37½ vertical—all at 6-5, 265 pounds.
He'd got by on pure athletic ability in college but with being tutored by Michae Strahan in the NFL he learned technique, hand placement, reading the formation and the tackle (or guard) in front of him and that paid off when he was healthy in 2007 and was a nickel rusher/rotational end, the most productive in the NFL that season in our view with 10 sacks in just two starts.
Injuries were kind of an issue, though—in 2006 he broke his foot in week six and was out for the season. In 2011 he had a neck/chest injury and in 2015 he had a pec injury that ended his season. At Notre Dame, he tore an ACL in late in his stellar sophomore season and it hampered him sone as a junior (he skipped his senior season for the NFL).
After football Tuck got his MBA and is now working on Wall Street with Goldman Sachs.
Career stats—