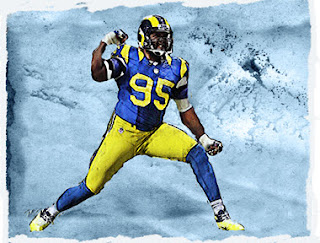 We tell this story a lot—a player who grades well but does not get much recognition or does not have great stats can still be a valuable player. William Hayes is another one of those guys.
He believes in Mermaids, does not believe that dinosaurs were real, but you can believe this:  he was a very good player.
Looking at his numbers they are not impressive has as defensive ends go—

However, he did it playing less than half the time doing his best work as a nickel rusher/wave player. He was a starter in 2009 with the Titans and looked good, especially versus the run but was not getting the sacks but got decent pressure but his playing time fell the next couple of years.
In 2012 he was signed by the Rams and for two years he was mostly a defensive left tackle in nickel but also spelled left end, Chris Long. Hayes and Eugene Sims played mirroring roles and when Sims came in in nickel the Rams had a four-DE rush that was very effective.
The Rams were also the top team in getting tackles for loss—tackling backs for one- or two-yard losses on the way to the quarterback and Hayes fit in that scheme well (In fact, he ended his career with more stuffs than sacks).
From 2014-15 Hayes had to start due to injuries to Long and in 2016 he was the starter at left end when Long was gone. In 2017 he was again a "wave" player, spelling the starter.
Here are his year snap count percentages— 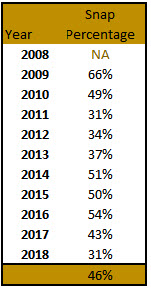 His best spell was 2012-13 and what impresses the most is not the sacks and hurries, though given he was playing about one-third of the time, but the stuffs. In 2012 he had nine run stuffs to match with seven sacks and 20 hurries. Double his playing time and it's maybe 14 sacks, 18 stuffs, and 40 hurries.
Of course, there is no way to know if the number project to say, two-thirds of the snaps being as effective as one-third. It's like a part-time baseball player hitting 15 home runs in 275 at-bats. Would he have hit 30 in 550 at-bats? Regardless, as a role player, Hayes was very effective (as has Eugene Sims who caddied for Robert Quinn).
As mentioned things changed in 2014, Long got hurt, Aaron Donald was drafted and that needed any need for a 4-DE pass rush. In 2015 Robert Quinn got hurt and Long got hurt again. In 2016 Quinn was hurt again and Simms was the starter at RDE as he was in 2015—a real mess outside of Aaron Donald.
Nonetheless, Hayes was a player who graded well versus the run and pass and was best used in a rotational or "wave" role and he showed that in his film and in his numbers.
He was solidly built had good base, was kind of a poor man's William Fuller. Not a taller "angular" player, but built low to the ground and used leverage to win. He would beat tackles with power and set up speed moves, rather than the other way around. And he had enough quickness to get an edge on a tackle.
He was one of those guys who you'd like on your team, maybe not as a starter, but as someone who can help you on third down and also spell your starter without losing quality.
In college at Winston-Salem State Hayes started 22 of 30 games for the Rams, recording 150 tackles with 15 sacks, 37 stops for losses, and 15 quarterback pressures.
As a senior in 2007, he led the nation with seven forced fumbles and tied for 10th nationally with a team-high 19 stops for losses including a team-leading 8.5 sacks and was second on the squad with 78 tackles.
He was the school's All-American since the school moved to the Football Championship Subdivision from the Division II level in 2006. He also set a school record while leading the FCS ranks with two touchdowns on four fumble recoveries. He was a big-play machine in school, clearly.
Hayes attended High Point Andrews High School where he was a member of the Raiders’ Mid State 2A Conference Championship team in 2003 where he played defensive end, linebacker and tight end.
Posted by John Turney at 9:50 AM