Today PFJ looks back at the career of one of the more underrated players of the two-way era. He was one of the more versatile and dynamic backs of that time, who could do almost everything. His name was Ward Cuff.

After graduating from Marquette, Cuff was drafted in the 4th round of the 1937 NFL Draft (34th overall) by the New York Giants. Cuff was personally scouted by Giants head coach Steve Owen. Although Marquette was led by their All-American halfback Ray Buivid (finished 3rd in the Heisman ahead of Sammy Baugh) and brothers Art and Al Guepe, Owen’s eyes became fixated on Marquette’s blocking back. He was the man doing all the dirty work, making all the tackles and lead blocking for the star backs. Owen knew he wanted Cuff.

That first training camp coach Owen made it a priority to use Cuff in any way possible. At Marquette Cuff never kicked, but Owen saw something in his prized recruit. So, every day for three weeks Owen drilled Cuff for a half hour in the art of place kicking. He liked what he saw. Owen recalled that first training camp in an article he wrote for Colliers magazine in 1942:

“Cuff had tremendous leg drive and an excellent sense of balance. I was not too certain about the third necessary qualification but that was speedily discovered when we scrimmaged. Mr. Cuff has nothing but ice water in his veins. Nothing rattles him. He looked like a perfect prospect.”

The 6-1, 192-pound Cuff played 11 years (110 games) for three teams (Cardinals, Packers) but mainly played his entire career with the New York Giants (9 years). A very durable player that would play through any aliment. “Ward was outstanding as a runner, a receiver, and a defensive halfback. Above all, he was an Iron Man who could play with so many injuries that he often seemed to be taped from head to toe before he put on his uniform,” wrote Steve Owen in his book My Kind of Football (1952).

On offense, Owen had developed a new offensive system he called the “A” formation. He had the perfect center, Mel Hein, to snap the ball, he had plenty of halfbacks and quarterbacks like Tuffy Leemans, Ed Danowski, Hank Soar, but what he was missing was the wing-back. The man who would go in motion at times to be a decoy, a ball carrier every so often, run pass routes, but mainly his role would be as a lead blocker. Cuff was the man for the job. “Our motto was to keep knocking men down until the whistle blew ending the play,” once said Cuff to the Milwaukee News in 1938. What Owen didn’t know was that Cuff, almost from the start in 1937, was his best receiver, blocker and defensive back.

Cuff was also very creative off the field. After his rookie year Cuff developed a football board game titled, Ward Cuff’s Football Game. Inside the game was a patent pending booklet, designed by Cuff himself. The game looked to be more detailed and “strategic” then most football board games of the time. A few of the board games have survived today, despite not being mass produced. It was obvious that Cuff loved the game of football. 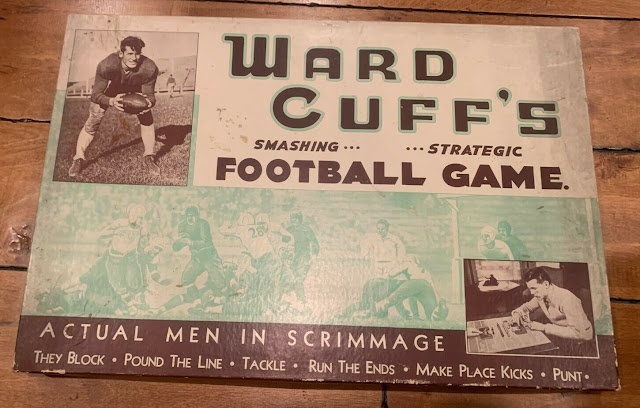 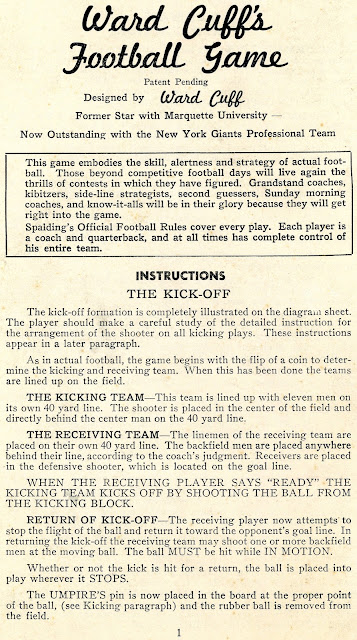 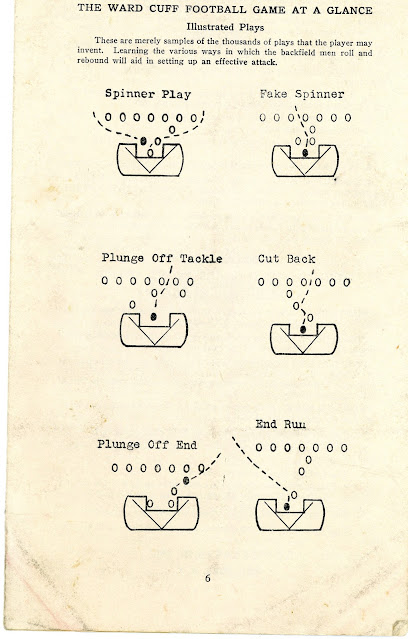 In his second season Cuff helped the Giants win the Eastern Division. He led the team in scoring with 45 points, while helping the defense only surrender a league low 79 points- including only ten points in their final five games.

In the NFL Championship Game they faced off against the Green Bay Packers (Western champs) at the Polo Grounds. In the first quarter Cuff booted a 14-yard field goal to give the Giants an early 3-0 lead. Then the Packers and Giants started to trade touchdowns as New York took a 16-14 lead into halftime.

Early in the third quarter the Pack took the lead for the first time, 17-16. Then Ed Danowski hit Hank Soar with a 23-yard scoring strike to give the Giants the lead back at 23-17. In the fourth quarter the Packers had the ball four times, but came close scoring only one time. In the redzone Packers quarterback Arnie Herber connected with Wayland Becker, but Cuff nailed Becker forcing a fumble that was recovered by the Giants Kayo Lunday who returned the ball to their own 22-yard line. The Packers never got closer.

Cuff was a world champion. Although he was just doing his job, Cuff’s name made plenty of newspaper headlines as the “hero of game.” 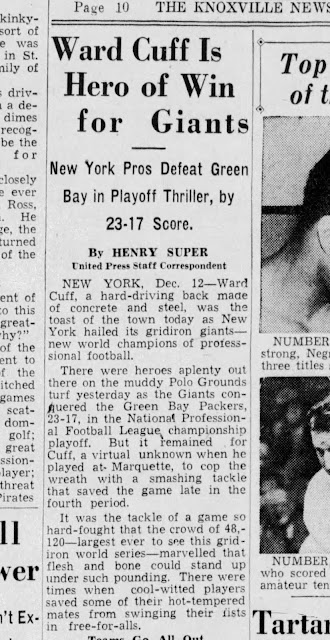 Ward Cuff’s passion for the game always came out in the way he played on the field. Going hundred miles an hour to help his team win. He didn’t care if he carried the ball or made the block. On film Cuff was always around the ball and consistently made plays- on both offense and defense. He showed excellent ball skills and was very durable, playing in over 100 games. He finished his career with 3,410 yards from scrimmage (1,851 rush., 1,559 rec.), averaging a robust 5.4 yards per carry.

Never the top dog in the Giants rushing game, he was mostly overshadowed by Hall of Fame halfback-fullback Tuffy Leemans- his teammate with the Giants for seven seasons (1937-1943). But twice Cuff led the NFL in rushing average per carry, in 1943 (80 carries) with a 6.5 avg. and in 1944 with a 5.6 avg. (tied with Steve Van Buren). His 80 rushing attempts in 1943 was a career high. Rarely did he get to carry the football. But he might’ve been the most important piece in the backfield.

Watching game footage of Cuff on the defensive side of the ball, he consistently showed great range and timing as a defensive halfback with 13 career INTs for 263 return yards. He always seemed to be around the ball, breaking up many passes and never being out of position. In the championship season of 1938 he had a 96-yard INT return for a TD against the Redskins (won game 36-0) to help clinch the Eastern Division title and set a Giants team record that lasted twenty years when Erich Barnes broke it in 1961 (102-yards). In 1941 he led the NFL in interception return yards with 152. In a 1985 NFL Films interview Washington Hall of Fame coach Ray Flaherty remembers the 1938 Cuff interception:

“We took the ball down to the Giants one yard line. It was first down and a yard to go for a touchdown. I was just sitting there relaxing, waiting for them to go across the goal line. Frank Filchock lined up in the tailback position and threw a pass into the right side of our offense against the best, probably the best defensive back in the league, Ward Cuff. He picked it off and went 96-yards for a touchdown.”

In 1938 Cuff explained his kicking process:

“There’s no trick to it. The mechanics of the thing are simple, and the only thing I take credit for are the hours I devote to practice. Practice is essential; it develops the right timing.

First and foremost, the kicker must keep his eye on the ball. That’s why so many kickers miss. Rushing linemen distract them, and involuntarily they take their eyes off the ball. That’s fatal.

I start off with my right foot, take one step with the left and let go.”

In 1946, at the age of 34, Cuff was traded by the Giants to the Chicago Cardinals, so he could be closer to his family’s Milwaukee home. Despite losing one of his best players Wellington Mara agreed to the trade. That season he finished 3rd in the NFL in scoring with 55 points (behind Packers Ted Fritsch 100 points, and Bob Waterfield 61 points). Cuff played his final season in the NFL with the Green Bay Packers in 1947. When he retired Cuff finished with 411 career points (had 305 points with the Giants).

In 2000 I interviewed Hank Soar, one of Cuff’s teammates with the Giants. He praised Cuff for his all-around play. “Ward could punt a ball. He would kickoff too, his ball would always be right there at the goal line. He was strong kicker. Ward was a great defensive player. He could run. He could just play football and he was a great defensive man. He’d intercept passes like nobody in football could do.”

Because he was never the focal point of the offense his overall stats come up short with other Hall of Fame backs from the two-way era, especially his contemporaries like George McAfee, Bill Dudley, Tony Canadeo or his teammate Tuffy Leemans. But nobody might’ve been more important for their team’s success than Ward Cuff for the Giants. Offense, defense and special teams – premiere kicker of his era – Cuff was simply an outstanding two-way player. Footage shows us that too. Once speaking in 1943 Steve Owen told Arthur Daley of the New York Times, “If I had to choose up sides, Ward would be the first man I pick. He does everything and does it remarkably well.”

Despite his lack of recognition Ward Cuff was honored with one of the greatest achievements any player can have. His jersey retired.

The Giants retired his no. 14 jersey in 1946- the year he was traded to the Cardinals. That fall Cuff returned to his old stomping grounds wearing a different uniform but a familiar jersey number. On October 20, 1946 Cuff jogged out in front of over 50,000 fans at the Polo Grounds wearing his Cardinals number fourteen jersey. The fans gave him an ovation. 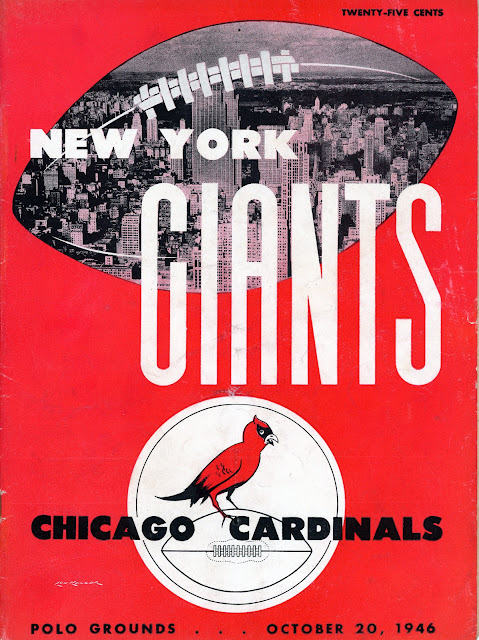 “In his nine years with the club, Ward Cuff was truly a ‘Giants Among Giants.’ From the very first he was a regular. He scored more points for the Giants than anyone has ever scored for them. He paved the way for many more with his unselfish blocking. When an important game hung in the balance for want of a field goal or point after touchdown he never failed. He was always the best pass defender and tackler on the team that excelled in defense…

The Giants miss Cuff. They miss his running and blocking and tackling but most of all they him ‘in the clutch.’ For when the chips were down he was always there to say ‘I’ll make it, let me try,’ when a first down was needed or a field goal would mean the ball game.

This year, when family ties and business interests were such that Cuff couldn’t come east, arrangements were made to permit him to play near his Milwaukee home. That explains his presence with the Cardinals today. No one can ever take his place on the Giants nor will anyone ever wear his No. 14 jersey. That number has been retired for all-time.” 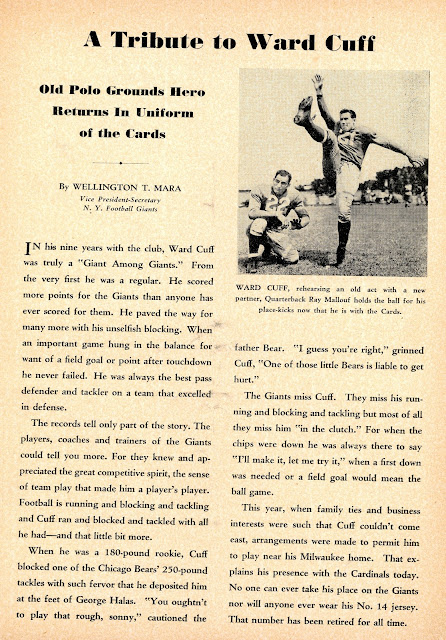 That day Cuff played his heart out trying to beat his former team. He accounted for 12 points on a touchdown run, one field goal (42-yards) and three extra points. But it wasn’t enough as the Giants pulled out a tough 28-24 victory.

Cuff’s jersey wasn’t retired quite yet. In 1961 when the Giants traded for Y.A Tittle they brought out jersey number 14 for him. But since 1965 no New York Giants player has worn the number fourteen.

After doing some high school coaching and working for Boeing, Ward Cuff passed away on December 24, 2002 at the age of 90. “We were contemporaries,” Giants owner Wellington Mara said to the Associated Press. “He came to camp in 1937 as a rookie, and we roomed together from then on in camp and on the road. I have a lot of fond memoires of him. He was a terrific competitor.”

Not too many players get their jersey retired. A Special honor, for a special player. We remember Ward Cuff.